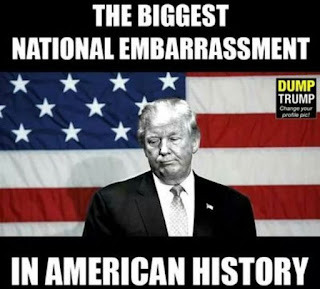 "Trump should accept his re-nomination at Disney's Fantasyland." - Dave Stancliff

When fading Reality TV star Trump, pole-vaulted into office on the backs of white supremacists and Q-Anon conspiracists, a national stage was set for a four-year reality show... with no commercials.

Our liar-in-chief never lost sight of staging events thus far into his chaotic regime. His press briefings always feature some sort of entertainment - whether it's parrying the press with bullshit - or making outrageous accusations to divert the news of the day.

As the biggest narcissist to ever squat in the Oval Office, Trump was flabbergasted when he couldn't bully the coronavirus and hold a full-fledged Republican National Convention in Charlotte, North Carolina. Or, Florida. Or, anywhere.

Watching his stage for accepting the GOP re-nomination shrink before his beady eyes, Producer, Don the Con, went into action.

It didn't take long for Trump to eye the White House as a viable alternative, because he'd look more presidential in that setting.

Forget about ethical rules and the horrible optics a majority of Americans would see as a president once again ignored history and traditions, to defile them in a partisan staged event for his re-election.

Unlike past staged settings, Trump is getting some pushback from seasoned GOP lawmakers who realize his proposal would be a sacrilege the party may never recover from.

Ever the showman, Trump is looking around at equally historic spots to embrace his nomination. He may SETTLE for the Gettysburg Battlefield in Pennsylvania, but the White House is still his first choice.

Why Gettysburg, the site that turned out to be the turning point in the Civil War? That battlefield is hallowed ground with 51,000 soldiers buried there after a three-day battle.

I suspect it has something to do with the significant amount of time that Trump's put in recent weeks pushing the movement to remove Confederate monuments, and rename US military bases named after Confederate figures.

There's also another reason why Gettysburg resonates with our ego-driven leader; President Abraham Lincoln delivered one of the most important speeches in US history - the Gettysburg Address - there on the battlefield.

Trump's pathetic attempt at "stolen glory," comparing himself to Lincoln, makes me want to vomit. The orange maroon has dared to say he's done more for blacks than Lincoln numerous times in past hate rallies and press briefings.

It's possible Trump's aides had some input into him making his acceptance speech in the Keystone State because it is a critical swing state, and the largest collection of Republican voters in Pennsylvania are located there. That Joe Biden is leading in the highly contested state's polls was probably another motivation for the location.

The thing that stands out to me, and I'll bet future historians too, will be Trump's unethical and partisan use of his office. Nothing has been sacred in his attempts to consolidate power and to get re-elected.

Quote for the Day: "Choose your audience wisely, for its not your performance that varies but their response is what matters!" -Ramama Pemmaraju

Top 10 Sites to watch Telugu Movies O…
Guide to New and Used Mobile Medical …
Best Low Acid Coffees That Won’t Upse…
How and Why America Was Hit So Hard B…
Juvenile diabetes and life insurance
My name is Dave Stancliff. Walk down the road of life with me each day. You'll find news, reviews, opinion pieces, art, fiction, music, and revealing slices of my life daily.