Portland Rally: Domestic Terrorists From the Left and Right Converge 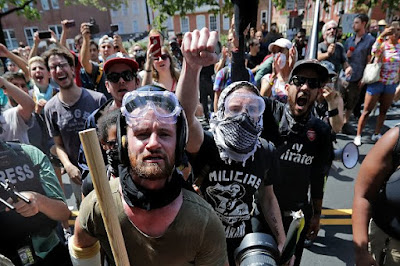 Todays much anticipated hate Rally in Portland may be the biggest yet during the Trump regime.

The morons organizing it, the Proud Boys, are a domestic terrorist group which invited other anti-government groups like Oath Keepers, Three Percenters, and neo-Nazis to attend their rally.

Standing in opposition of the far Right groups, is the Left's answer to them, the Rose City Antifa, one of the longest-standing anti-fascists groups in the country. The group made a call on the website for "the community to defend itself."

Antifa is also classified as a domestic terrorist group by DHS and the FBI.

All of which brings us to the rally today.

Regardless of our political affliation, Democrat or Republican, it's up to us to stop these groups from dividing and terrorizing our country.

That means there's no need to jump aboard either bandwagon. The alt-right organizers won't be able to run through the streets and attack the public because the police won't let them.

Instead we all should be uniting on subjects like gun safety and health care... not enabling radicals on either side to distort the true vision of America.

The Left's rhetoric of protecting the streets is a call to violence that's totally unnecessary. Like I said, we have police officers in America. It's their job to protect our streets and citizens from hate groups and criminals.

Slipping into anarchy - with armed bands of zealots - is the last thing America needs right now. Surviving under the Trump regime, which has given power to Far-Right wackos, has been challenging enough.

Violence is not the answer to our problems in America. It's the dark underbelly of our society which we still haven't been able to reconcile after 250 years.

Fear is the unifying factor on both sides. As President Franklin D. Roosevelt once said, "There's nothing to fear, but fear itself."

Going to rallies with the purpose of seeking violence to make a political/ideological point is not only unproductive... it's a waste of your good time.

There are better ways to peacefully protesting politics than resorting to violence. One of them is voting.

Slamboree ’96
Homebuyers anticipate lockdown exit a…
Lorenzo Lotto & The Iconic Lotto Carp…
Send Money to Gambia Online Through A…
$50 Million Stolen from Upbit
My name is Dave Stancliff. Walk down the road of life with me each day. You'll find news, reviews, opinion pieces, art, fiction, music, and revealing slices of my life daily.

Portland Rally: Domestic Terrorists From the Left and Right Converge