Two Myths: Belief That The Earth Is Flat And That Trump Cares About 'Forgotten Americans?' 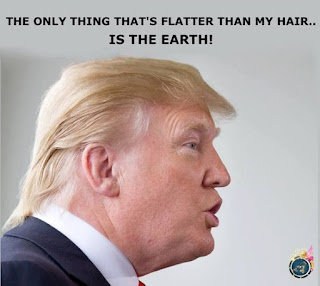 Did you know some people actual believe the earth is flat?

These flat-earthers  don't often publicly share their Belief for fear of ridicule.

Some, like NBA superstar Kyrie Irving, think the world is as flat as a basketball court, and he's not ashamed to share this belief.

Okay. What do you say to a guy like that? From all accounts he's a nice guy who just happens to believe in a conspiracy myth.

Irving's misdirected belief doesn't affect anyone else. He's not hurting anyone with his acceptance of false news. The same can't be said about our asshole president!

His belief that people with brown, or black skin, are inferior goes back to the days of his youth when his dad, Fred, attended KKK meetings.

We know how he feels about minorities versus whites. Just look at the last 11 months.

He's waging all out war against minorities in America and from "shithole counties" (one of his latest racist attacks) like Africa, Haiti, and El Salvador.

But what about Trump's white base? How are they doing in Trump's America? Some are starting to figure out Trump sold them a bill of shit.

Ask the Carrier workers who were laid off recently. The layoffs were announced in June 2017, six months into Trump's presidency and after he boasted about creating jobs for the company.

I'm sorry, but not surprised, to see this happen to those Americans who were fooled by Trump's lies. His partisan assault on health care will leave millions of Americans uninsured, especially his supporters.

If you look at how Trump treated the middle class and the elite this year, with the passage of his Tax Scam legislation, the disparity is glaring.

The wealthy hit a bonanza.

The middle class, and those living in poverty - who for the record, form the core of Trump supporters - were left with some crumbs and a future of cutting back on so-called "entitlements" like welfare and social security.

Like the flat earthers, many Trump supporters will continue believing anything he says - no matter how far out it is.

15 Insanely Perfect Backpacks For Tee…
The 9 Don’ts of Interviewing
2021 MacBook Air to Come in iMac Insp…
The Ultimate Guide To Obtain a Europe…
How to Tell if You Have Bed Bugs?
My name is Dave Stancliff. Walk down the road of life with me each day. You'll find news, reviews, opinion pieces, art, fiction, music, and revealing slices of my life daily.


This post first appeared on AS IT STANDS, please read the originial post: here
People also like
15 Insanely Perfect Backpacks For Teen Boys
The 9 Don’ts of Interviewing
2021 MacBook Air to Come in iMac Inspired Colours
The Ultimate Guide To Obtain a Europe Residence Permit
How to Tell if You Have Bed Bugs?
Sun, sea and perfect crowd-free sands on the Lincolnshire coast

Two Myths: Belief That The Earth Is Flat And That Trump Cares About 'Forgotten Americans?'