The 1927 encounter of the Black Knight satellite

What if we succeeded in 2 way communication with an intelligence outside our Planet, and no one noticed? What if THEY heard our call and responded but we just couldn’t grasp their language? 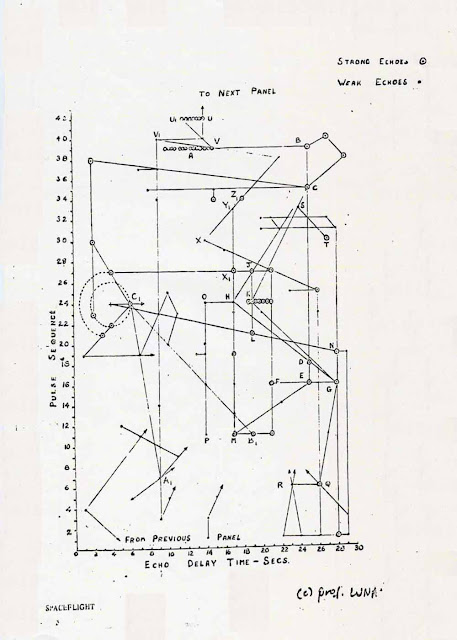 A-Reece – The 5 Year Plan ft. Wordz
Flying Carpenter Ants!
It’s Me – Chapter 12
Capture Attention and Drive Traffic w…
Sara y Ava: la pareja lésbica de Lege…
That’s exactly what happened as early as 1928 in Eindhoven Holland and again in 1929 aboard a French research vessel in the South China Sea. After transmitting over the radio waves 3 sounds in rapid succession every 30 seconds, Van der Pol in Eindhoven examined the return echoes. They were not as neatly spaced as he had sent. In fact they were highly irregular, ranging from 1 to 30 seconds in delay time.

At the time, the discrepancies were explained as fluxuations in the ionosphere, or magnetic disturbances. But the pitch or frequency of the sounds did not change - only the spacing of the echoes.

It wasn’t until the 1970’s that this mystery was carefully examined and deciphered by Duncan Lunan, a scientist from Scotland. He plotted a vertical axis of the transmitted pulse sequence with a horizontal axis of echo delay time. The result ? A picture of the constellation Boötis as it would look 15,000 years ago.

But that’s not all. There was a message hidden in the dots on his graph. Lunan was able to translate into simple English the meaning of these echo delay discrepencies, proving perhaps that they are a purposeful manipulation directed by a highly intelligent ‘other’ .

The message is as follows:

START HERE.
OUR HOME IS EPSILON BOOTIS.
WHICH IS A DOUBLE STAR.
WE LIVE ON THE 6th PLANET OF 7 - CHECK THAT, 6th OF 7 -
COUNTING OUTWARDS FROM THE SUN
WHICH IS THE LARGER OF THE TWO.
OUR 6th PLANET HAS ONE MOON,
OUR 4th PLANET HAS THREE,
OUR FIRST AND THIRD PLANETS EACH HAVE ONE.
OUR PROBE IS IN THE ORBIT OF YOUR MOON
THIS UPDATES THE POSITION OF ARCTURUS SHOWN ON OUR MAPS."

The only possible conclusions we can draw from this are:

2) Prof. Lunan interpreted the graph incorrectly and his extrapolations are more speculative

3) An advanced civilization in the vicinity of Arcturus (Hokulea, the guiding star of Hawaiian mythology) sent an unmanned satellite probe to monitor Earth 15,000 years ago, to be activated by radio waves when Humans reached that technological point in their evolution. A dialogue could then have been established, and we might have gained much more than the misunderstood reference greeting.

After publication in the Journal of the British Interpanetary Society (complete with disclaimer from the editors) and a few newspaper articles in the U.S. on this ‘far out’ scientist, the matter was dropped and no further investigation was undertaken.

Could a musical score be made from graphs of this fascinating interstellar communique`? Is the plotting in 2 dimentions of 4 dimensional space an excellent way for different intelligent species to communicate?

The 1927 encounter of the Black Knight satellite