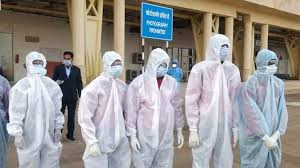 India have witnessed an unending surge of new COVID-19 cases in the last few days—new cases per day achieving one landmark after another. Last Sunday the 15000 mark was crossed; on Thursday 16000, on Friday 17000 and today the Number is 18552 in the last twenty-four hours. States prominently contributing towards this surge are Maharashtra, Tamil Nadu and Delhi in terms of absolute numbers while most of the other states are also having a surge in lesser numbers. The universal behavior of the virus that we mentioned in the past articles here is somewhat negated in India with numbers rather fluctuating, not becoming steady   or showing any signs of flattening the curve of new cases even after a month of the acceleration in at  least 3-4 states. For example: Maharashtra seemed to be steady at around 2500 cases per day and Mumbai showing a steady decline from around 1500 to 800 cases per day; but suddenly the numbers spiked again with Maharashtra rising to more than 5000 cases and Mumbai again crossing 1300. Of course, the great redeeming solace is the recovery rate which is now more than 58% and this in numbers means more than 10000 people on average are getting cured everyday across the country. The death rate is also manageable, although it has risen from 2.8% to a little more than 3.1%.
There are reasons why the universal trend of the virus, acceleration period lasting for about a month and then showing steady decline, is not being displayed in India. First, unfortunately, the only thing that was very right, bold and timely was the early Lockdown, and then it had been a clumsy downturn in terms of decisions, measures and policies. In various states of the country the lockdown was not strictly followed the main focus always being on easing of curbs. As we mentioned earlier in these pages the Delhi government kept on showing an unusual hurry to get rid of the curbs: for example, why at all was it necessary to allow 100% attendance in offices from the third lockdown while public transport was not fully restored and metro trains were not running, why to open up religious places/malls/salons/restaurants so fast; now, Delhi is paying the price of being casual with number of infections per day rising to nearly 4000 with the government creating more confusion by indulging in insane projections. Another example is the state of Karnataka that also showed a tendency to paint a normal picture as soon as possible, perhaps due to the political dispensation of the state. The state even allowed secondary examinations to take place while the Supreme Court was considering cancellation of all such exams all over the country—it must be understood that although young students are likely to get cured fast if infected there is the tremendous risk of them being carriers of the virus to the elderly in their families. Now, cases are rising in Karnataka at a much faster rate. In states like West Bengal and Assam the respective lockdowns were not taken seriously and only now the importance is being realized.
Second, the mishandling and delaying of the nearly forty-million migrant workers led to serious repercussions: within the third lockdown trains had to be run to take them home and taking the cue special trains started running spreading the infections to various parts. Due to the lax measures people all across the country, stranded or not, started taking private cars, buses, tempos to go to their home states contributing to the same end. Domestic flights had to be started in line with trains and therefore before the conclusion of the fourth lockdown almost everything had been reopened. This is sharp contrast to other severely affected countries where lockdown was the strictest at the acceleration stage of the virus.
Thirdly, the Coronavirus testing done all around the country. Except for some states like Maharashtra and Delhi, testing had been low. Then, the India media alleged that numbers of tests in various regions are being deliberately lowered to suppress the surge. True or false, there followed a spree of testing in the last few days which too perhaps could explain the fluctuating surge of the virus.
Hiccups normally accompany a disorder. Therefore, we have seen decisions or rather reversal of decision being taken or done in a hurry by several states. Regular trains suspended from July 1 to August 12. A strict lockdown is being imposed in Guwahati, Assam for 14 days starting coming Sunday night. West Bengal has extended lockdown till 31st July with some relaxations. Tamil Nadu and several other states had already extended lockdown or made the measures much stricter even with warnings to the citizens—fall in line or face another lockdown! Delhi is at the moment concentrating fully on improving the health infra and not considering stricter measure even after the uncontrollable surge. Office-goers of Delhi have said that almost in every office there have been dozens of infected which they attribute to the 100% attendance allowed. A Serological Survey is also currently underway in different regions while people, also in the government, starting to admit the obvious—that India is in stage-3 of the virus which means there is community transmission now.
If more testing has indeed contributed to increasing new cases there should be a steady rate and subsequent flattening of the Corona curve in a few days in at least Maharashtra, Tamil Nadu and Delhi. In various other states, the real acceleration might take place a few days later, and so, in a diverse, large country like India with the highest population density the universal behavior of COVID-19 can still be expected, but at different times and in different ways. In the meantime, measures should get the strictest in areas where needed, despite the fact the fifth lockdown, supposedly the last, finally comes to an end last of this month.