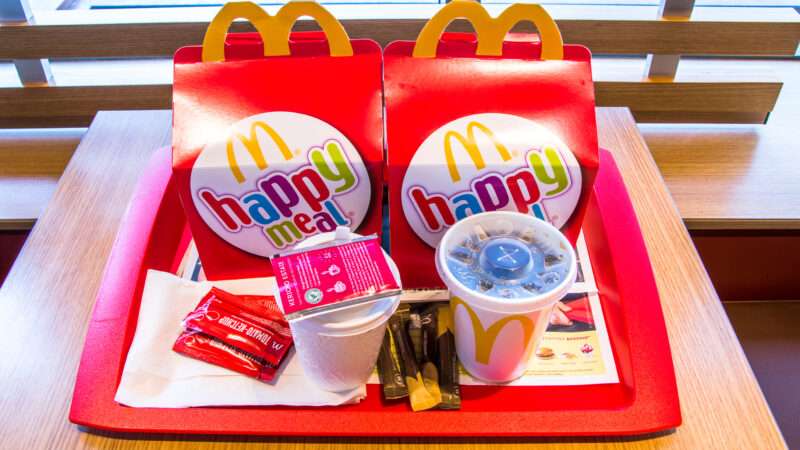 A lousy bill passed this week in Prince George's County, Maryland, will force all restaurants in the county that serve kids' meals to offer subjectively healthy foods and beverages as a default option.

The bill passed by a unanimous council vote and is expected to become law once the county executive signs the measure. It's intended to target a host of popular food offerings—from McDonald's Happy Meals to IHOP's kids' menu to, say, a local food truck that offers a meal option for kids.

"The bill will start by requiring, over the next two years, that all food retail businesses offer water, milk, or 100 percent juice to accompany every children's meal as a default beverage option rather than soda, which can still be requested by parents or guardians," Civil Eats reported this week. "Over the next five years, the bill will add requirements for every restaurant to offer at least one healthy side dish and then one healthy main course."

The bill, the text of which you may download here, outlines those additional requirements. For example, it defines a "healthy" kids meal, in part, as one "that contains not more than: 550 calories; 700 milligrams of sodium; 10 percent of calories from saturated fat; 15 grams of added sugars; and 0 grams of trans fat; that includes at least a half (1⁄2) cup of non-fried fruit or non-fried vegetables (excluding white potatoes, juices, condiments, and spreads)."

Advocates hope the new law, dubbed the Healthy Kids Meal Bill, will serve as a national model that will magically transform fast food into health food.

"Of course, most restaurants should aspire to make most, if not all, of their kids' meals healthy," a staffer from CSPI, which has sued many chain restaurants over the years, opined. "But what a relief for Prince George's parents to know that there would be at least one meal combination on the menu that experts would recommend for a child."

Civil Eats spoke with Martin Dresner of the University of Maryland, which is located in Prince George's County. Dresner notes many small, independent restaurants are "really hurting" due to the Covid-19 pandemic and measures that states have adopted to combat it. The Healthy Kids Meal Bill will hurt them some more.

How? Well, it'll increase costs for (and, probably, food waste at) restaurants of all sizes by forcing them to alter their menus in ways customers don't want and foist on kids food items they may not eat. And there's this: how many small restaurants in P.G. County are able to figure out if the food they're serving provides "10 percent of calories from saturated fat"? The bill empowers the health department and other local agencies to enforce a requirement many restaurants can't necessarily comply with.

So the bill will likely harm restaurants of all sizes in Prince George's County at a time when many of them are struggling to stay afloat.

In a report on the bill's passage, NBC's Washington, D.C. affiliate, WRC, relayed the story of one P.G. County resident who says he supported the bill's passage because he "lost 200 pounds by changing his eating habits."

That's remarkable. I sincerely applaud his incredibly hard work and dedication. He's a role model. But that resident—not county lawmakers—changed his eating habits and bettered his life.

Childhood obesity is a serious and prevalent problem in P.G. County and elsewhere. However well-intended, though, Prince George's County's new Healthy Kids Meal Bill won't do much, if anything, to fix that problem. What the Healthy Kids Meal Bill will do, though, is increase costs for restaurants of all sizes that operate in Prince George's County. At any time—but particularly in the wake of a pandemic that has already forced many restaurants to close permanently—that's an unnecessary and bitter pill to swallow.