Italy Says NO to Any More Migrants

Over the weekend, Italy once again roiled Europe, only this time not with its plunging bonds but with its drastic shift in immigration politics, when the country’s new populist leader, Matteo Salvini, now operating as Minister of the Interior, made good on his warning last weekend that “the good times for illegals are over”, writing an urgent letter ordering Malta to accept a ship carrying 629 shipwrecked North African Migrants currently sitting off the Italian coast – calling Malta the “safest port” for the passengers, and advising that Rome will no longer offer refuge.

Why Friday The 13th Will Be Your Luck…
Coinbase Card adds New Assets and Cou…
ON THE BOARDER - Acting Sec. of Homel…
Faces in the Crowd: D.A. Pennebaker
Arabian Rugs and Carpets

The Italian message to Europe was simple: having been the port of landing for tens of thousands of migrants in the past two years, Rome would no longer accept boat after boat of North African (or middle eastern) refugees.

Italy’s vocal resistance to accepting further migrants even prompted prominent globalist George Soros, the person many have accused of being behind Europe’s forced migration patterns, to urge the EU to compensate Italy for the 100,000+ migrants landing there, noting that the strong showing of far-right parties partly is due to Europe’s ‘flawed’ migration policies.

As for Italy’s “suggestion” that the Mediterranean island of Malta accept the migrants, not surprisingly it fell on deaf ears.

But if Italy (and Malta) would no longer accept migrants, and with Merkel’s “open door” policies in Germany now a taboo, the question remained: who would accept the countless boats of migrants still headed for Europe?

Moments ago we got the answer when that “other” PIIG, Spain, offered on Monday to take in the rescue ship MV Aquarius, that has been drifting in the Mediterranean sea with 629 migrants stranded on board after Italy and Malta refused to let it dock.

Spain’s Prime Minister Pedro Sanchez, who took office just over a week ago, has given instructions for the boat to be admitted to the eastern port of Valencia, his office said in a statement. 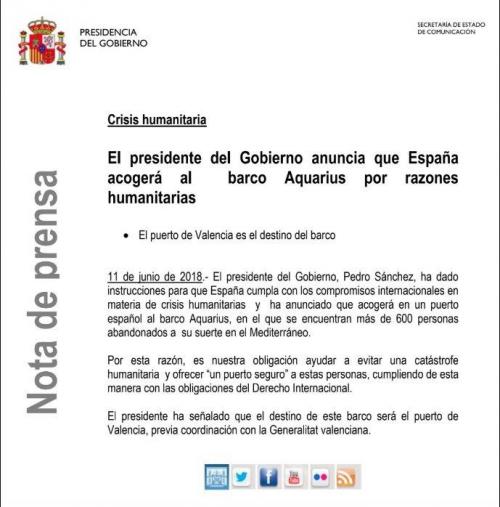 “It is our duty to help avoid a humanitarian catastrophe and offer a safe port to these people, to comply with our human rights obligations,” Sanchez’s office said.

As we reported previously, the Aquarius took the migrants, including 123 unaccompanied minors, 11 other children and seven pregnant women, toward Italy, but the country’s shadow leader, Salvini, barred it from docking and said it should go to Malta.

No luck here though, because despite its overly liberal government, Malta also refused to take the ship, saying it was Italy’s responsibility as the rescue was overseen by the Italian coastguard. The tiny island says it already accepts proportionately more refugees than Italy.

Sanchez, a Socialist who toppled his conservative predecessor with a no-confidence vote after a corruption scandal, made his offer after the mayors of Valencia and Barcelona both offered to take the boat in at their ports.

A question has emerged however: as the Spain Report notes, the Aquarius is located some 1,300 km away from Valencia, or over a week’s voyage; meanwhile the boat only has a day’s worth of food and water for the 629 migrants current on board.

It was not clear just how Spain plans on resolving that particular logistical problem, although the solution may come from a relieved Malta, which said that it will provide fresh supplies to the Aquarius:

I thank #Spain PM @sanchezcastejon for taking in #Aquarius after #Italy broke international rules and caused a standoff. #Malta will be sending fresh supplies to the vessel. We will have to sit down and discuss how to prevent this from happening again.This is a European issue -JM

What is certainly clear going forward, is that the Italian government is now delighted to be off the hook from receiving further migrants:

And not just in this case but permanently:

Which begs the question (which we and others have asked): how long before the brand new Spanish government is overthrown and replaced by populists? After all, it is the “refugee” problem that led to the populists taking power in Italy and also almost cost Merkel her political career in 2015 and 2016.

Reprinted with permission from Zero Hedge.

The post Italy Says NO to Any More Migrants appeared first on LewRockwell.

2019 Summer Fireworks in Monaco and Cannes

Italy Says NO to Any More Migrants