Not too long ago in our very own galaxy, near, near by...

Shining morning star, how you have fallen from the heavens! You destroyer of nations, you have been cut down to the ground. You said to yourself: "I will ascend to the heavens; I will set up my throne above the stars of God. I will sit on the mount of the gods' assembly, in the remotest parts of the North. I will ascend above the highest clouds; I will make myself like the Most High." But you will brought down to Sheol into the deepest regions of the Pit (Isaiah 14:12-15 HCSB)."

Inspired by the latest installment of the Star Wars franchise, Rogue One: A Star Wars Story, I decided to write about the real star wars. While millions engage their hearts and minds by viewing an imaginary intergalactic struggle on the big screen, millions more are oblivious and unaware to the unseen conflict being fought in the true heavenly realm. As demonstrated from the selected passage above in Isaiah, this epic clash between the forces of God and the forces of the evil one began with a rebellion. Among the angelic hosts, there arose...a rogue one. Jesus himself commented on this event:

There has been war in heaven and on earth ever since, right up to our day. In fact, according to the prominent signals now being revealed by Yahweh and confirmed by many, we are on the cusp of the greatest time of conflict the world has ever seen. Greater than World War II? Yes! Listen to our Commander-in-chief, "For then there will be great distress, unequaled from the beginning of the world until now—and never to be equaled again" (Matt. 24:21 NIV). This time of great distress is popularly known in our circles as the Tribulation period, but to be Scripture-specific, it's identified as the Day of the LORD (Yahweh), the time of Jacob's trouble (Jer. 30:7), as well as Daniel's 70th week (Dan. 9:24-27). Understanding Daniel's prophecy is key to discerning a full seven year time of God's wrath in the future, not as some say, only 1,260 days or three and a half months (i.e. Mid-Trib, Pre-wrath positions). Ah, but I digress.

Let's take a look at some key passages in the Bible that highlight the real star wars. First, it's important to note that the authors (and the Author) of Scripture use the term "star" or "heavenly host" in reference to actual spirit-beings, whether good or evil, holy or fallen. Job 38:7 makes this abundantly clear, because in context, God is speaking to Job about those who witnessed the creation of the earth; in this verse we have the "morning stars" in synonymous parallelism with the "sons of God," singing and praising the LORD for His wonderful act of creation.

Our earthly realm became ground zero for star wars after the rogue one's great deception, where mankind chose to obey a "beast of the field" rather than their immortal, invisible Creator God. This creature that instigated mankind's rebellion was no mere snake, however. There's more to the story. Interestingly, the Hebrew vowels n-ch-sh, often translated as "serpent," can also be translated in a verbal form nochesh, meaning "the diviner," or "divine one." Further, according to Hebrew scholar, Michael Heiser, there is even an adjectival form nechosheth, which is related to being shiny like copper or bronze—elements which are also used in description of the divine (for more on this fascinating subject, see Michael Heiser's, The Unseen Realm, 87-88).

I will put hostility between you and the woman, and between your seed and her seed. He will strike your head, and you will strike his heel (Genesis 3:15 HCSB)."

The battle for the souls of men began with a special focus on the conflict between the seed of the woman and the seed of the serpent. For us modern stargazers, we see this being depicted among the literal host of heaven, specifically around the constellation known as Virgo. The Great Sign of Revelation 12 heralds the climax of what has been a recurring pattern of enmity between God's children and the devil's children. George Lucas knew a thing or two when he tapped into great biblical themes and a vague spirituality dubbed The Force. He knew where to go to borrow certain narrative elements for his science fiction series...all the popular artists and creatives take after the Original Artist and Master Creator.

This next passage might surprise you. It's one of those that we gloss over without giving a second thought. Check out Judges 5:19-20:

The kings came, they fought; then the kings of Canaan fought; at Taanach by the waters of Megiddo, they got no plunder in silver. The stars fought from heaven; from their courses they fought against Sisera. The wadi torrent of Kishon swept them away...(LEB)."

We find more synonymous parallelism in this celebratory song inspired by the Spirit of God after Israel's victory over their enemies. Notice how war on earth coincides with war in heaven. We get another glimpse into this reality in the book of Daniel, chapter 10, verse 13, where the holy messenger speaks to God's prophet and alerts him to the unseen struggle between the "Prince of Persia" and "kings of Persia" along with "one of the chief princes, Michael [one we later discover in NT passages described as the archangel]." Further, in Daniel 8:9-14, a prophetic word fulfilled in Israel's past regarding a type of the coming Antichrist, we see key terms like "host of heaven," "stars," and "holy one." Thus, an understanding of the Hebraic usage of code terms is crucial in order to properly understand what is going on in the book of Revelation, where we see the final war in heaven coincide with war on earth.

Playing off of the title of Lucas' third movie in the first trilogy, it is entirely appropriate to call the last book of the Bible: Star Wars: The Return of Jesus. From beginning to end, like a prophet of old, the apostle John uses coded, metaphorical "star language" to reveal a greater, unseen conflict that parallels the last days mayhem occurring in our own realm. The Son of God, Jesus, the Bright Morning Star (Rev. 22:16) is the only one who has the power and authority to bridge the gap and bring heaven and earth into a harmonious union once again (Eph. 1:9-10; Rev. 5:4-5; 21:22-25).

Is there a Death Star in the book of Revelation? Yes! Look at Rev. 8:10-11. However, keep in mind that not every reference to falling stars means that it is an actual comet, asteroid, or meteor. In Rev. 9:1-2 a "star," which had fallen from heaven to earth, opens the shaft of the abyss; in Rev. 12:4 we discover that the dragon is not alone in his rebellion—he had "swept away a third of the stars in heaven" and on his way down, he will have company (Rev. 12:7-9).

Hopefully, in this short preview of the real star wars, you will have gained more awareness of the battle raging all around us. The final battle will commence suddenly and swiftly (Rev. 2:16; 16:15; 22:7, 12, 20), so we must remain alert and prepared. Around this time last year, I was reminded just how sudden destruction can come upon the earth. My wife and I were inside a movie theater watching—yes, you might have guessed: Star Wars: The Force Awakens—when nine tornadoes descended upon the Dallas-Fort Worth area; here's a link to the story headlined: Total devastation. 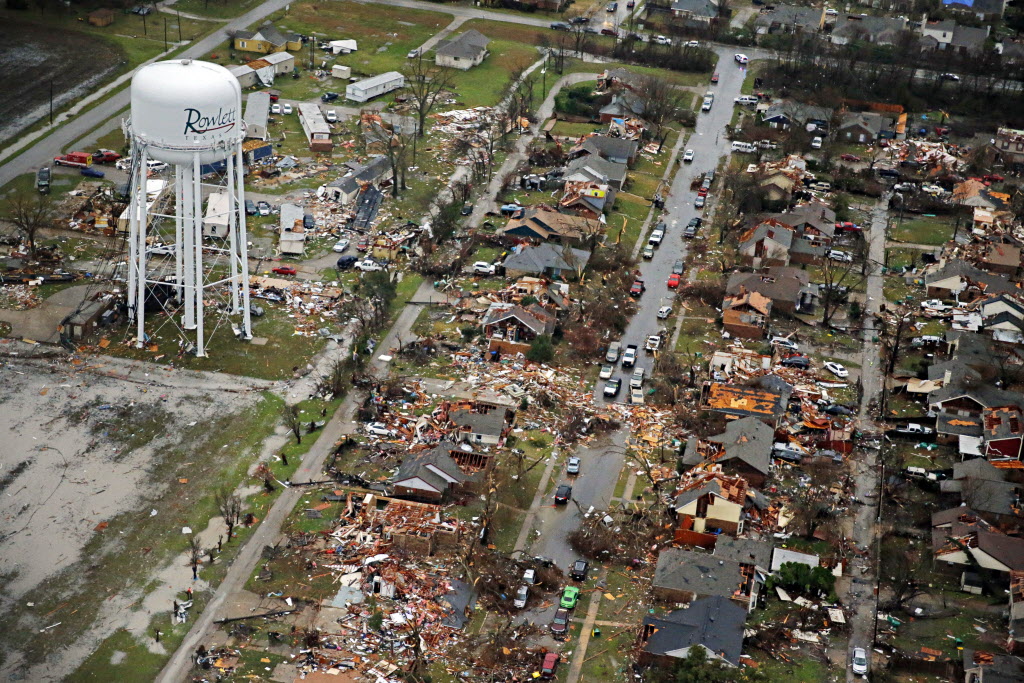 We were spared that day, but many lost loved ones and possessions. Ironically, inside the theater we were blissfully unaware of what was going on outside; we were busy and distracted, interacting with alternate universe. It was a powerful example of what can occur when our hearts and minds are engaged in the struggles of another world, when our own world is groaning and crying out for hope and redemption (Rom. 8:18-25). Later on, I started seeing the parallels to our own fight for freedom and the whole world's struggle against tyranny. I mean, is it just me, or does George Soros bear a striking resemblance to Emperor Palpatine? Another stellar connection was recently noted by Matt P. on his site, Daily Crow. Check out his latest post entitled, "Walking on the Moon." This is just amazing to me, especially because of the link to 2017: the last time the United States walked on the moon was the Apollo 17 mission, and this event took place 2017 days after the Israelis recaptured Jerusalem on 6/7/67. This is just a small sampling of the frequent and surprising patterns now being revealed that should direct our attention to the significance of next year. We're not out of the woods yet...so hang on and keep watching.

Here is a two-minute trailer for Rogue One:


Sometimes the trailer is better than the actual movie itself; I haven't seen the new movie yet, but I'll probably see it sometime soon (and check the weather on the day that I go to the theater again!). Listen again with ears to hear, "the world is coming undone..." and near the 1:08 mark, "...there isn't much time" as a sun [star] goes into total eclipse and a trumpet sounds, and a final challenge, "...this is our chance to make a real difference...are you with me..."

This is our chance to make a real difference in the real star wars. Are you with me? There isn't much time. Who in your sphere of influence needs to hear the good news about the Bright Morning Star, the Lord Jesus Christ, our Hope? Which brother or sister in the Lord needs to be lifted up, encouraged, and reminded of the glory that is coming (Rom. 8:18; Col. 1:27)? What necessary steps do you need to take in order to draw closer to our Father and the rest of His children (James 4:8; Heb. 10:24-25) before our gathering together in the air (1 Thess. 4:16-17; 2 Thess. 2:1)?

Let's conclude with a direct and relevant message from Luke to us soon-to-be-Skywalkers:

...when these things begin to take place, stand up and lift up your heads, because your redemption is near! (Luke 21:28 HCSB)"