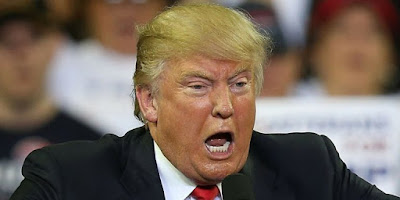 In an emperor's new clothes moment for the GOP, Republican chair of the Senate Foreign Relations Committee, Bob Corker, stated that the White House has become “an adult day care center,” that "every single day at the White House, it’s a situation of [senior officials] trying to contain him,” and that Trump’s behavior is setting the nation “on the path to World War III.”  What's more, Corker admitted in a Washington Post interview that most Republicans in Congress are well aware of this:  “Look, except for a few people, the vast majority of our caucus understands what we’re dealing with here.  Of course, they understand the volatility that we’re dealing with and the tremendous amount of work that it takes by people around him to keep him in the middle of the road.”

Corker's "day care center" comment couldn't be more apt given today's disturbing piece in the Washington Post that portrays Trump as a volatile baby, sulking and fuming because he isn't receiving the universal praise he thinks he deserves.  He is "lashing out, rupturing alliances and imperiling his legislative agenda" and "has torched bridges all around him, nearly imploded an informal deal with Democrats to protect young undocumented immigrants brought to the country as children, and plunged himself into the culture wars on issues ranging from birth control to the national anthem."

The article goes on to say that Trump "has shown flashes of fury and left his aides ... scrambling to manage his outbursts."  Politico tells a similar story, describing "a process in which Trump's aides try to install guardrails for a president who goes on gut feeling — and many days are spent managing the president," convincing him that "something better was his idea or ignore what he said to do and hope he forgot about it the next day.”  His main source of information appears to be Fox News, and his tweets and rages, particularly in the morning, can generally be tied to whatever happened to be on Fox & Friends.

Apparently Trump has been brooding about Corker's comments and remains frustrated by Secretary of State Rex Tillerson calling him a "fucking moron," leading Trump today to challenge Tillerson to an I.Q. test.  He also remains focused on the NFL player protests.  And, according to the Post, to get out of his funk, he was pushing to have another campaign-style rally in North Carolina this past weekend, and was disappointed it didn't happen because he longed to get back in front of "the rowdy crowds he loves."  Meanwhile, there are real disasters not in Trump's orange covered head that one would think would command presidential attention -- from hurricane recovery, including in Puerto Rico which remains largely without power or drinking water, to wildfires in Northern California.

Instead we get a dangerous new reality game show.  Apropos of Corker's World War III reference,  Trump quipped at a dinner with his top military commanders that this might represent "the calm before the storm," which he followed up, when asked by a reporter what storm, with "you'll find out."  Such comments would be alarming under any circumstance, but in the context of Trump's constant taunting of North Korea's leader Kim Jung-un and dismissing any efforts at diplomacy, becomes another exhibit in support of his removal under the 25th Amendment.

But, realistically, implementing the 25th Amendment seems far fetched, at least until there is even greater unraveling.  And impeachment proceedings won't happen unless and until the Democrats take back at least one chamber of Congress and/or Robert Mueller's investigations bear fruit.

In the meantime, we cannot assume that Trump won't crash through the carefully erected guardrails that the so-called adults in the White House are using to contain him.  Corker needs to do more than engage in a Twitter war with the president.  He and his fellow Republicans need to act -- and act fast -- to restrain Trump's destructive tendencies by, for example, putting more safeguards in place to prevent him from launching a nuclear strike or reneging on treaties.  Meanwhile, his keepers in the White House need to start giving him consequences, like sending him to his room without his two scoops of ice cream, limiting his time on social media, and taking away his television privileges.

This post first appeared on Fair And Unbalanced, please read the originial post: here
People also like
Finding the Best Watch Repair
Carpenter Ants in House
[Extended ECQ Advisory] #ExtraCareAtHome: Globe committed to deliver service support to customers under extended ECQ
“The Friend Who May Not Seem a Friend” – The Cat and the Fire, Post 2 of 3
MICRO BUSINESSES