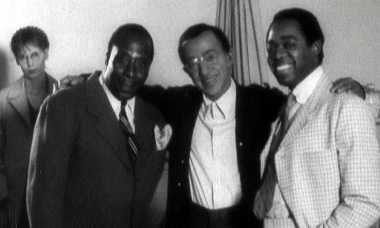 I don't know how many of you remember the 1983 Wood Allen film, Zelig, in which Allen plays an individual with the uncanny ability to take on the characteristics of those around him. The only problem, as I recall, was that there was no real individual at Leonard Zelig's core, just a skilled chameleon whose power was imitative and derivative, not original.

I'm beginning to think of Justin Trudeau as our version of Zelig. You may recall, for example, that he certainly supported Finance Minister Bill Morneau's comments last year that precarious work and job churn are here to stay, and that young Canadians will just have to get with the program. A short time later, however, when Trudeau was addressing politicians and elites in Germany, he had this to say:

“No more brushing aside the concerns of our workers and our citizens,” the prime minister said in prepared remarks. “We have to address the root cause of their worries, and get real about how the changing economy is impacting peoples’ lives.”

He even adopted some of the language of anti-trade movements. [Emphasis added.]

“When companies post record profits on the backs of workers consistently refused full-time work — and the job security that comes with it — people get defeated,” he said.

Trudeau said the anxiety of working people is turning into anger, and politicians and business leaders must take heed and take “long-term responsibility” for workers, their families, and the communities in which they operate.

“For business leaders, it’s about thinking beyond your short-term responsibility to your shareholders,” Trudeau said.

“It’s time to pay a living wage, to pay your taxes. And give your workers the benefits — and peace of mind — that come with stable, full-time contracts.” [Emphasis added]

Note the last sentence's jarring contrast with what Morneau/Trudeau told young people in the fall.

Why the change of tone? Perhaps it was due to the fact that Canada had just finished signing the CETA deal, and the neoliberal prime minister fears there will be few others unless the illusion of progress for workers is perpetrated. As well, his audience was really a world one, and we know how the man likes to bask in the reflected glow of his 'sunny ways' and international press adulation.

Which brings us to his latest Zelig move, which mirrors that of the Orange Ogre to the south:

Canada is going to put off for three years its plan to regulate cuts to methane emissions in the oil and gas sector.

The move comes less than a month after U.S. President Donald Trump signed an executive order that hits the pause button on matching American commitments to methane cuts -- and the timing is no coincidence.

Using lines only too familiar to us from the Harper era, we are told that the delay is so as not to put our businesses at a competitive disadvantage.

Rebukes from the environmental sector have been swift:

Dale Marshall, national program manager with Environmental Defence, told the Star that curbing methane gas is one of the easiest ways to reduce emissions that cause climate change. The fact that the government is putting off action on this low-hanging fruit in the climate fight demonstrates a “total” lack of leadership, Marshall said.

He accused Ottawa of showing “no backbone” on the issue.

Despite the government's protestations that they will still remove the same amount of methane over time, those who study such matters dismiss such self-serving rhetoric:

Andrew Read, a senior analyst with the Pembina Institute, called the new methane timeline a “real blow” that could hinder Canada’s goal to curb greenhouse gas emissions by 30 per cent below 2005 levels by 2030.

Read said that, even if the government still cuts methane emissions by 45 per cent, the delayed timeline translates to an estimated extra 55 megatonnes of the gas that will get released into the atmosphere. He added that methane is one of the most powerful greenhouse gases that contribute to global warming.

So there you have it - a prime minister as elusive a character as was Zelig, and sharing with him, apparently, one other 'quality': a complete absence of a moral and ethical core.
Recommend this Post