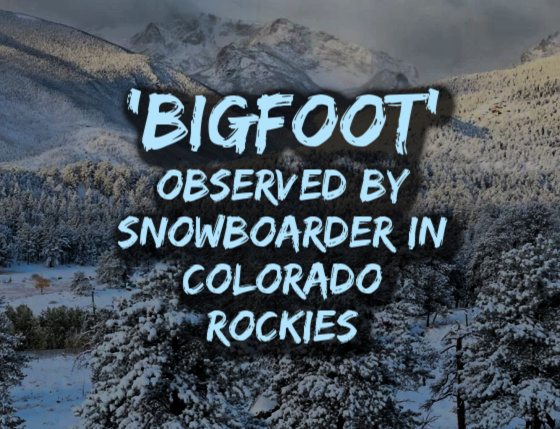 A British man is invited to Colorado to enjoy some snowboarding. While out in the wilderness of the Rockies near Aspen he observes a large biped being moving towards him, no doubt a Bigfoot.

A good friend of mine was working in the United States in a town called Aspen, Colorado. He had invited me over from the UK to stay with him and do some snowboarding in the mountains while I was there. It was the week before Thanksgiving when I arrived in Colorado and I found out that the ski area wasn't open at that point. I was bummed out about it, but my friend told me not to worry about the lack of boarding as he had bought a snowmobile and we could still get out and enjoy the snow. When he picked me up from the airport I'd already seen that he had bought a new 4-wheel drive truck.

So, a couple of days later we drove up the back of the mountain range and drove as far up this narrow forest road as we could get the truck to go. We took the snowmobile from then on up the mountain. My mate's girlfriend was also with us, so I was taken on the back up to the top near the top lift station, while he went back to collect his lady. I waited there until they returned.

The snow was very deep at the top, around 7 or 8 feet deep. We had a whole day riding on the back of the mountain completely to ourselves. We didn't see anyone else that whole day. I later found out its a federal offence to do this in that area, but I didn't know that at the time. At around 5 pm we decided it was time to get off the mountain before it went dark. My mate decided he was going to take me back halfway to the truck first, then return for his lady. And I could make my way to the truck using my board and wait there for them both. We got about halfway back to the truck (in about 15 minutes) and he stopped to let me off. He said to just board back to the truck and he'd go back and collect his girlfriend.

As he disappeared back up the trail, I had the realization that I was in the middle of nowhere on a foreign continent in the failing light. It was a turning into a bright clear night with a big moon and lots of snow cover. I was traversing the side of a hill on a path that snowmobiles use, so the snow was hard packed and about 3 to 4 feet deep at the side of the track banked up. I could see down into the valley to my right. The path went down for about 500 yards then it turned 90 degrees right and down into the valley.

I stopped at the bend to get my bearings and I noticed someone walking up the path towards me, but at a distance of about a quarter of a mile away. I squinted into the darkening evening wondering what I was looking at. At first I thought it was a bear as 'it' was big and 'it' was moving quickly. Whatever I was seeing moved with a slope of a walk. I soon realised 'it' wasn't a bear. I thought 'it' looked like a big man wearing a large over coat with the collar turned up.

Whilst I was watching this unfold I got a sudden fear. I was terrified. This 'individual' was now about halfway towards me on the path. The way 'it' had come up the mountain side 'it' walked through the odd group of trees. There were also trees within 30 or 40 meters of the track. The 'individual' suddenly took a 45-degree turn to the right and walked into the snow field towards the trees. 'It' didn't slow down, despite walking through 3 feet of snow. Something which would have almost stopped me dead in my tracks. The moon was shining from behind this 'thing,' so I didn't see any details on the front of it, due to the light shielding 'its' features.

At the time I didn't hear or smell anything. This thing was big, though, but it would be hard to gauge its exact dimensions from the distance between us. I had only been stopped for about a minute but it seemed like an hour standing there. Still shaking, I decided it was do or die and I pointed the snowboard straight down the track and went as fast as possible. I didn't stop at the point were 'it' had left the path and crossed into the woods as I was still very scared. I stopped about a 100 meters from the truck, took my board off and ran the rest of the way. As I was getting to the truck I could hear the ring dinging of the snowmobile coming back. I was as white as a ghost as they pulled up and stopped. I never told them about what I had seen as my mate would have never let me live it down." TB

This post first appeared on Phantoms And Monsters: Pulse Of The P, please read the originial post: here
People also like
The Best Ramen in Sacramento
Just Nasty: Pastor Got The Congregation Drinking His Self Proclaimed Holy Water