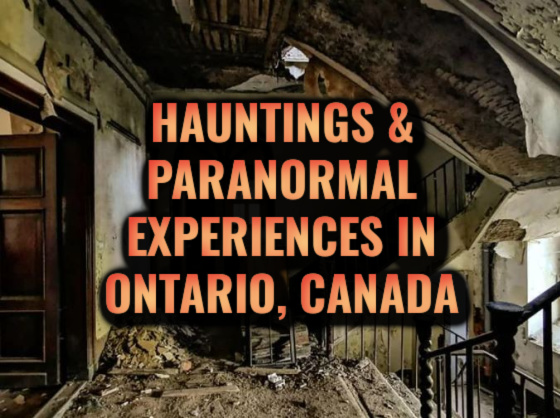 3 separate hauntings / paranormal incidents in Ontario, Canada and depicted on the 'Paranormal Survivor' television series. Have you had a similar experience? Feel free to contact me.

In 2015, Sommer Boudreau moved into a house in Deep River, Ontario with her two daughters, Tia (the oldest) and 3 year old, Ashley. Within a month of moving in, Sommer felt like she was being watched.

One night, in the middle of the night, she woke to see something crawling across the room, onto her bed. It had the body of a human but the face of a lizard. It came at her and she reacted in horror, back up. She felt it wanted to eat her. It eventually faded away. Around this time, Sommer's daughter, Tia, began experiencing things in her room. She would feel cold, regardless of how many covers she had and she sometimes woke to see a big black shadow standing over her bed. Tia began having trouble sleeping and would discover deep, painful scratches on her legs.

Over time, she began to see the ghostly figure of her deceased grandfather standing by her door. She initially thought he was there to watch over her but she gradually began to think it was something sinister that had taken the form of her grandfather to trick her. Her mother insisted she not speak to it. Sommer's other daughter, Ashley, also began to speak of seeing a monster in the room. Katie Turner, a psychic medium, was called in. She sensed a dark energy and, in the attic, observed a huge reptilian shadow figure. She sensed it was demonic in nature. Katie managed to cleanse the property and Sommer has reported no activity since. Katie has since referred to the Sommer Bordeau case as one of the scariest cases she ever worked on.

Judy Spehar lived in a home built in 1957 by her grandfather. They began experiencing strange phenomenon many years later.

One night, Judy's daughter's stereo kept turning itself on. Judy herself observed the kitchen cupboards seemingly opening on their own. Her son, who lived downstairs in the basement, she went to say good night to him. She turned around and saw a dark image right behind her. It not black but dark grey, she noted.

Another night, she woke to hear somebody waking on their hands and knees walking up to the side of her bed. Though she could see nothing. Ken Suminski, a paranormal investigator, was called in. He got EVP's asking for Beth. Judy's brother, Mike, a Vietnam veteran, died in the late 1970s, from a farm accident. His wife was Beth. Judy found her on Facebook and asked her to visit the house. Beth Hardin agreed. She explained that she and Mike were married in 1978. When he returned from Vietnam, he was a changed man. They eventually divorced. Beth had carried that guilt for years. Upon arriving, Beth heard “Beth, I love you” in the EVP. She then claims her whole body felt a jolt or a shock. She believes that Mike was telling her it was okay, that she should not feel any guilt.

Wayne Snyder and Darcie Tripp moved into a home in Sarna, Ontario in 2005. It had been sitting empty for 2 years. It was right next to a church. After moving in, Wayne was bending over the couch to plug something in and felt three taps on his shoulder. He thought it was his wife but she was in another room.

Later, Darcie would hear somebody walking around and washing dishes in the kitchen and stacking them in dish strainer, while laying in bed at night. Doors would open and close, though they would check and find nobody there. Things started happening more and more. While watching TV, they heard the China cabinet fall over and smash. They even felt the vibration though a quick check revealed nothing was wrong. They would also see figures in the dining room, like flashes of shadows of something moving around. Wayne came downstairs one night and saw a semi-transparent floating head hovering there. It appeared to look directly at Wayne.

Later, Darcie woke to find herself paralyzed. She was unable to breath. Wayne came in and, to him, it looked like somebody was on top of her. Paranormal investigators were called in and they picked up a Scottish voice... a voice saying “bendy rabbit” which, when played backwards, said: “I don't have anything.”

They published their story in a Sarnia newspaper. Previous owners of the home told them the voice belonged to a former boarder, a Scottish man.