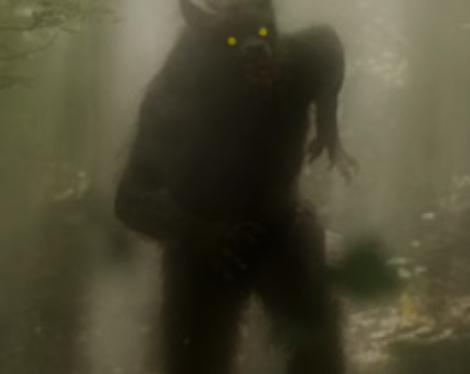 “This occurred probably about six years ago. I was with my grandmother and my aunt and we were driving back from Brockway one night at about 8PM and we were driving... Oh, we were driving from Punxsy (Punxsutawney), sorry. And we were driving down this little hill and it was pretty dark. And so you could barely see anything. So we came down this hill, the headlights were flashing on the road and this strange, solid black figure took about two steps and crossed a fifteen foot road. Two long strides and just completely across the road. At first we thought that maybe it was just a shadow or something, and this thing was like 7 feet tall, probably higher than that. This thing took long strides and we said there's no way that thing could have been a shadow. I mean this thing, honestly, touched the road two times and was just across it. And it had like these yellow, dark yellow eyes. Like very bright too. It was like a half Bigfoot, almost like a half-dog kind of. I mean this thing was fast, big. Definitely bigger than a Bigfoot probably and faster than any animal or human that I've seen. I just that was, you know, really creepy because I never believed alot of these... this kind of stuff. But after I saw that I kind of have a lot of belief in these types of things.”

Richards-Gebaur AFB, MO - 3/29/2003: On or about April 29 2003 I was driving from Dallas to Mankato, MN. Staying off the toll roads and ended up on a road going around the south of Richard-Gebaur AFB, W Markly Rd. driving down an incline I saw a lake that was white capping in front of me due to hurricane in the south. I made a left turn on the road and crossed a small 1 lane bridge and looked to my left and saw a landed cigar shaped craft about 25’ tall and unknown length since it was sitting in a canyon, I could only see three rows of 4 portals. I tried to stop because my video camera was in the back seat. A flock of turkeys were in front of me and 2 hit my windshield, not breaking it, I was going so slow. There were 2 farm houses with gates right up to road and couldn’t turn Around. Got a couple of miles down the road and shrugged it of. It’s been my head every day until now so I went to Google Earth and found it, and it was exactly how I remembered it, book marked it. And went back 2 days later to look at it again and now the lake is gone, the farm houses and it has been totally changed. Living in S.F. I can’t go back there to check it myself but it’s weird Google Earth changed. - MUFON CMS

"Computers in the future may weigh no more than 1.5 tons." --Popular Mechanics, forecasting the relentless march of science, 1949

"I think there is a world market for maybe five computers." --Thomas Watson, chairman of IBM, 1943

"I have traveled the length and breadth of this country and talked with the best people, and I can assure you that data processing is a fad that won't last out the year." --The editor in charge of business books for Prentice Hall, 1957

"But what ... is it good for?" --Engineer at the Advanced Computing Systems Division of IBM, 1968, commenting on the microchip.

"There is no reason anyone would want a computer in their home." --Ken Olson, president, chairman and founder of Digital Equipment Corp., 1977

"This 'telephone' has too many shortcomings to be seriously considered as a means of communication. The device is inherently of no value to us." --Western Union internal memo, 1876.

"The wireless music box has no imaginable commercial value. Who would pay for a message sent to nobody in particular?" --David Sarnoff's associates in response to his urgings for investment in the radio in the 1920s.

"The concept is interesting and well-formed, but in order to earn better than a 'C,' the idea must be feasible." --A Yale University management professor in response to Fred Smith's paper proposing reliable overnight delivery service. (Smith went on to found Federal Express Corp.)

"I'm just glad it'll be Clark Gable who's falling on his face and not Gary Cooper." --Gary Cooper on his decision not to take the leading role in "Gone With The Wind."

"We don't like their sound, and guitar music is on the way out." --Decca Recording Co. rejecting the Beatles, 1962.

"If I had thought about it, I wouldn't have done the experiment. The literature was full of examples that said you can't do this." --Spencer Silver on the work that led to the unique adhesives for 3-M "Post-It" Notepads.

"So we went to Atari and said, 'Hey, we've got this amazing thing, even built with some of your parts, and what do you think about funding us? Or we' ll give it to you. We just want to do it. Pay our salary, we'll come work for you.' And they said, 'No.' So then we went to Hewlett-Packard, and they said, 'Hey, we don't need you. You haven't got through college yet.'" --Apple Computer Inc. founder Steve Jobs on attempts to get Atari and H-P interested in his and Steve Wozniak's personal computer.

"Professor Goddard does not know the relation between action and reaction and the need to have something better than a vacuum against which to react. He seems to lack the basic knowledge ladled out daily in high schools." --1921 New York Times editorial about Robert Goddard's revolutionary rocket work.

"You want to have consistent and uniform muscle development across all of your muscles? It can't be done. It's just a fact of life. You just have to accept inconsistent muscle development as an unalterable condition of weight training." --Response to Arthur Jones, who solved the "unsolvable" problem by inventing Nautilus.

"Drill for oil? You mean drill into the ground to try and find oil? You're crazy." --Drillers who Edwin L. Drake tried to enlist to his project to drill for oil in 1859.

"Everything that can be invented has been invented." --Charles H. Duel

"The abdomen, the chest, and the brain will forever be shut from the intrusion of the wise and humane surgeon". --Sir John Eric Ericksen, British surgeon, appointed Surgeon-Extraordinary to Queen Victoria 1873.

My goal has been to present current alternative news, interesting paranormal events and descriptions of the anomalous world that surrounds us all. I also strive to provide astral and intuitive insight for those seeking help. I hope I've achieved this...and I would appreciate your kind consideration. Lon

Sympathy for the Minor Devil: Hell Comes to New Hampshire

Half of European men descended from one Bronze Age ‘king’