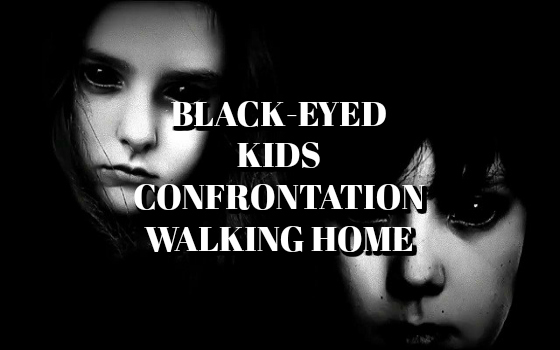 This is an encounter I experienced in the summer of 2009.

I was born and raised in the plains of Texas, specifically in an area where black-eyed kids sightings are prevalent. I had heard the stories, tales, legends, whatever you want to call them since I was a young man but never truly believed them. The black-eyed kids was mainly something I entertained as a joke or something to get a rise out of people. This changed in the summer of 2009.

It was a warm night in June. I was up late, around 2 am, as I typically liked to stay up late, especially in the summer since it would stay fairly warm even after the sun went down. I had just run up to the store to grab a big fountain drink and was returning into my house through the backdoor when I was approached by two children, a boy and a girl. I was very startled once I realized they were there since I wasn't expecting to encounter anyone in my backyard so late at night. The little boy asked "Could we come in? We need to use the phone, we are lost." This is when I noticed the blackness of their eyes. Both of them had eyes so black they were like pits. This is also when my heart sank, I couldn't believe I was actually seeing them. That they were there right in front of me. As I mentioned before I had heard the legends of the black-eyed children most of my life, so there was no way I was going to let them in my house. I darted in the backdoor and locked it as quickly as I could. Once I was inside I ran upstairs and flipped on the lights to try and see if they were still outside. Thankfully by then, they were gone. I had so much adrenaline pumping by that point though that I grabbed a weapon and began searching the house and making sure all doors and windows were locked.

It took me hours to get to sleep that night and it's an encounter that will stay with me for the rest of my life. These entities took the form of something most people view as innocent, weak, mild and try to trick unsuspecting people to do God knows what with or to them. I am just glad my reflexes kicked in and I was able to live to tell the tale. PM

The witness later followed up:

The boy was wearing a black jacket and shorts with a white shirt and a rope tie. The little girl was wearing a black dress and high white socks. I don't remember any hairstyle specifically, but their overall appearance was dark (it was dark outside as well) so I think both of their hair colors were black.

BEK (Black Eyed Kids Phenomenon): The Boy At The Door

How to Help Your Child Handle Allergies While in School