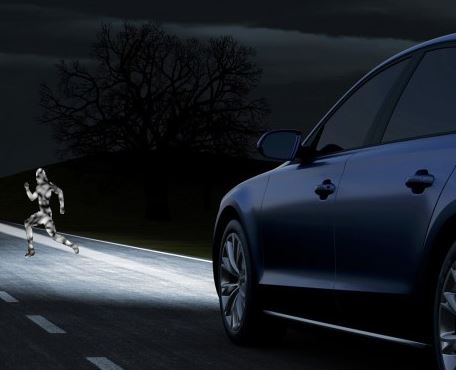 San Juan Capostrano, CA - 3/7/2015: I was driving on 74 Ortega Hwy to Lake Elsinore, after work around 9:30 PM. It was raining and I turned my brights on because I thought there was debris on the road. I saw a small man like creature all wet standing there. "It" was 1-2 feet tall, muscular, dark colored like the trees, it looked shiny and not hairy but it was wet. "It" was in the middle of the road & when I turned my head lights brighter "it" turned "it's" body in my direction but I couldn't see any eyes. "It" then ran across into the forest as I passed. There was no where for me to pull over and my phone had no reception so I couldn't tell anyone until I got home. Since then I've purchased a dash cam and I intend on capturing it on film if I cross paths with "it" again. - MUFON CMS 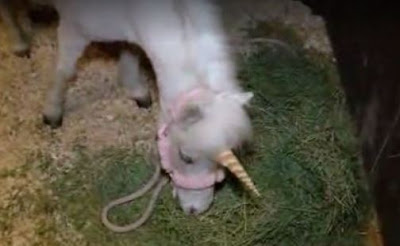 Some California residents were rubbing their eyes and wondering if they were seeing things after a “unicorn” made a run for it this week.

Juliet spends her days making dreams come true, posing as a unicorn for photo shoots for Fresno-area photographer Sandra Boos. And during a shoot Wednesday night, Juliet got loose.

“She threw her head up, pulled the lead rope out of her hands and that was it. So at that point she ran off and the more we pursued her, the further she ran,” Boos told KMPH.

Everyone who saw the unicorn had a surreal experience, including police who responded to the call.

“We got a call of a unicorn running in the roadway on 12th Avenue near Road 32,” said Officer Justin Perry.

For more than three hours, Juliet ran down roads and avoided capture. A helicopter was even called in to help spot her, but nothing seemed to work. Juliet was simply too spooked to slow down.

“That’s the nature of horses. They want to be in a group—they’re herd animals—and so we had been chasing Juliet, the unicorn for so long that she was looking for a friend,” Pardy said.

Juliet followed Shady into a trailer, bringing an end to the chase. And Boos finally got a sense of a relief.

“I was standing with the (California Highway Patrol) at the time and a call came over the radio that said the unicorn is in custody, and there was a huge sigh of relief, a few tears, and some laughter. It was the comedic relief needed in the moment.” - Did you see that? Unicorn leads police on 3-hour chase

A big cat has again been reported prowling just yards from houses in St Andrews.

Drew Lumsden spotted the beast as he drove daughter Kaitlyn, 7, from their home on the south-east edge of the town to her swimming class last week.

The landscaper insisted the black animal was the size of an alsatian or labrador dog but had a feline gait and long tail.

Big cat sightings have been reported in that area before, with a flurry in 2012.

The animal spotted last Thursday evening was in a field about 300 yards from the road near the Grange Inn.

Drew said: “I was taking my daughter to swimming just before 6pm and she saw it first.

“She thought it was a fox at first but it was no fox, it was black.

“I could tell it was a cat by its head and the length of its tail. It was walking along, as casual as anything.

“I stopped to take a photograph but it was too dark and pictures came out grey.”

The pair stopped and watched the creature for more than five minutes.

Drew, who was one of several people to spot a big cat at Rathillet a few years ago, returned the next day to look for paw prints but found none.

Four years ago there were several sightings of a creature resembling a black leopard in the same area and Lumbo Den and a wooded area near Strathkinness Low Road.

Local historian and artist David Joy said he had seen the cat several times, once just yards from his door at The Grange, and had found remains of rabbits which he said had obviously been eaten by something large.

Just a few weeks earlier there were a series of sightings reported over just a few days of a creature resembling a black leopard with a 4ft long tail around Kilmany.

Fife has previously been named a big cat hotspot, with a plethora of tales of large felines roaming the countryside.

Police revealed in 2014 that they had had 10 reports in the previous two years.

One was of a man being attacked by a big cat in Strathkinness.

Many believe in the Balbirnie Beast, said to be on the loose around the Glenrothes area.

In 2006 Fife Constabulary thought it had found proof of the animal when it produced a cast of paw print which experts said may have been from an 18-month-old big cat, but others argued it could have been a large dog.

West Los Angeles, CA - 1994: I was in Muni Court and in front of Judge who momentarily changed shape into a Reptilian. Once the Reptilian sensed that I showed no fear, it expressed fear at me and then changed back into a human form. I was standing about 10-15 feet from the Judge. I felt that my lack of expression caused the Reptilian to express fear at my solemn look. My thought was of disbelief, because I was in court for a traffic violation. Nobody else in the courtroom seemed to notice the physical change of the Judge. This only took about 5-10 seconds. My case was rescheduled and the next time I was to go in front of that Judge, she recused herself and would not see me again. I saw what I saw. I will never forget this incident. I have told only 2 people of this incident. The Judge was dressed in a black robe, and her face was what changed. I did not see her hands at the event as they were on the desk and were blocked by the podium where I stood. No words were spoken during the shape change.

The Judge did not want to speak to me after the event, but had the bailiff tell me to return at the next scheduled court date. I never saw the Judge again in my return visits to the court. There were probably 15 other people in the courtroom including court officers/reporter - MUFON CMS


UFOs: Generals, Pilots, and Government Officials Go on the Record

Keepers of the Garden


Your help is appreciated - Thanks!
Advertise with Anonymous Ads