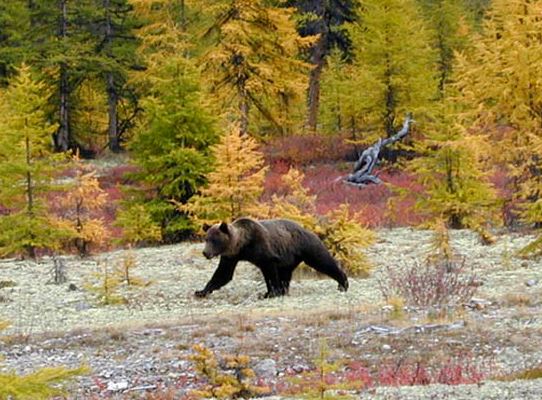 Wild beast steals weapons from frightened hunter before vanishing into the remote taiga.

The brown bear brazenly walked into a remote forest cabin, and helped itself to the man's bag plus two guns, say police.

The animal turned the tables on the 57 year old hunter when he went to a nearby river to get water deep in Irkutsk region.

'On November 16 he was hunting miles away from the nearest village and decided to stay at a forest cabin,' said a statement from the local interior ministry.

'He left his belongings in the cabin and went to get some water. On his return, he heard some suspicious sounds and spotted a bear.

'To avoid an encounter with the animal, the hunter scurried off into the woods where he hid for several hours.'

When he returned to the remote cabin, his bag and two guns were missing.

The hunter went to look for his weapons in the taiga for several days but returned empty-handed.

This then prompted him to contact the police. Read more w/ photos at Beware: Brown bear armed with two guns on the loose in Siberian region

Hanover, PA on 2017-11-25: Driving on Rt. 94 north leaving Hanover, Pa. It was dark and there were clouds in the sky, out of my passenger window (north) a bright white light in the clouds caught my attention. It came down through the clouds rapidly, and there was a hole in the clouds where it came through, like it pierced the clouds and left a hole. Then it seemed to maintain that altitude for a second or two, not long enough to say that it was hovering because it started to move southward after it came down. It kind of came down, paused a second and started moving south. There was a glowing trail where it came down through the clouds. The object appeared black and round, I could only see the shape against the clouds above it, so I don't know for sure if it was actually black or not but it was definitely round. It had 2x visible lights, steady lights no pulsing no blinking. The object started moving south from my passenger side across the driver's side of the car. It was no longer leaving a trail and the lights began blinking as it was passing over, which made me think maybe it was a plane. But then it suddenly shot back north, back to where it had come down through the clouds, and the 2x lights got much brighter when that happened. Then it changed direction again and started heading back south again, at that point the 2x lights went to 1x solid bright white light, there was no more blinking, then it just shot off southward crazy crazy fast, and I lost sight of it. It was completely gone in under a second. Much too fast to have been a plane or drone I think?

After it was out of sight I noticed the glowing trail where it came through the clouds was still there and still glowing. It did not leave any other trail at all, just where it came through the clouds. It is possible that moon light may have been shining through the spot where it came through the clouds? But it really didn't look like that, it looked more like a glow, which faded away after about 2-minutes. I didn't hear any noise, didn't see any other planes in the sky, just a strange object that shifted direction rapidly and then took off crazy fast. Gotta say the glow it left in the clouds was creepy, it was like a whitish golden glow. The clock in the car said 7:20pm but I think out of habit I looked at my watch, it is a digital battery powered watch (Casio) and it was completely dead, no display on it at all. I have no idea if that has anything to do with the object or not? But I found it odd that it died at that moment. I had checked my watch when I left my brother's house at 7pm and again when I crossed over Rt. 234, which was only a couple minutes before I saw the object, so the watch was definitely working, and now it's definitely dead. Nothing else appears to have been affected, just the watch. May not be related at all.

I'm pretty sure our current flight technologies can't replicate what I saw? The sighting was on Rt. 94 heading north past Rt. 234 before it meets up with I-15 north. My initial feeling upon seeing it was curiosity, trying to figure out what could pierce clouds like that. Then when I saw the blinking lights I thought it was just a plane, but then it totally changed direction and shot northward again, and the lights changed, my exact words were "what the Hell is that"? When the light got brighter and it shot off southward I was actually feeling a bit tense, not quite fear, just a bit tense. I had a 90-minute drive to get home and I spent the entire drive trying to come up with explanations, and I can't think of anything at all to explain what I saw. So I classified it as unidentified. When I got home I looked up your web site and filed this report. I hope this helps. I hope I've provided you with enough details. - MUFON

NOTE: This apparently occurred near me...in the direction of Hampton, PA. I have been told by a few local witnesses that there have been a series of UFO sightings around York / Adams County Pa. in the past few weeks, though this is the first actual report I've seen. Lon

Lompoc, CA - 2013-09-29: I have been dealing with these entities for the last 5 years. I've been doing my best to get proof of who and what they are. hey have been talking to me none stop for these last years. I've gotten ionized radiation readings along with non-ionized readings around my body when I finally broke down to pay some money to buy what I could afford in equipment. Sadly they don't show up in FLIR however they seem to affect it. I've even taken brainwave readings of myself that are rather irregular. - MUFON

Gallant, Alabama - 2017-11-23: I was awoke at 4am to find myself unable to move in my bed. There was a curved screen floating above my head. The screen appeared to have no mass as there was no edges of the screen. The screen was translucent and I could see through it. Small images would blink on the screen every 1/2 a second. Each time the image appeared it would be the same image displayed on the screen a hundred images at the same time. I didn’t recognize any of the symbols as being known to me. I then peered through the screen and saw two dark figures. They were standing in opposite corners of my room at the foot of my bed. The figures were no more than four foot tall and were covered in a shroud of shifting darkness/shadow. I felt a sense of fear come over me. It was dire fear. I remember looking over at my dog who was sleeping on my bed with me and feeling upset that the dog was still sleeping and not barking at the intruders or try to help me. I then yelled at the two intruders and told them, “Hell no! I’m not allowing it" and I told them they had to leave immediately. I couldn’t make out any facial features but could see one of the intruders turn it’s head to the other one as if it was in shock of the fact that I had ordered them to leave. The blackness/ shroud around them appeared to move rapidly or shimmer as much as black fog can shimmer and then they were gone. Immediately I had control of my body and could move again. I jumped up and turned the lights on and searched the room for the entities. I didn’t find anything. I was visibly shaken by the experience and it took me a few minutes to calm down and stop my body from shaking. I looked at the clock when I jumped out of bed and it said 4:30 am. I remember being upset because I had to get up at 8:00am to get the turkey ready to go in the oven for Thanksgiving - MUFON

Return of an Apex Predator

WISDOM, Mont. – Dean Peterson, a rangy fourth-generation rancher with a handlebar mustache, is used to factoring in all sorts of challenges as he works his vast spread in the Big Hole Valley. Summer wildfires that can sweep down the pine-blanketed mountains to the west, harsh winters that can endanger his thousand-plus head of cattle.

Yet in the back of his mind these days is a threat most of his forefathers never faced: grizzly bears. Settlers pushing West had all but exterminated the hulking predators by the time Peterson's great-grandfather arrived here in the late 1800s.

A year ago, however, a trail camera in the nearby forest snapped a grainy photo of a grizzly crossing a stream, marking the first confirmed sighting in the valley in a century. Then in May, Peterson was stunned to see one lope across a snow-dusted road as he drove a four-wheeler a few miles from his property.

"It will happen," the 51-year-old rancher says of the looming presence of grizzlies. And he is equally matter of fact about what they'll mean for both him and his neighbors. "It will be more difficult to run cattle." Read more at Yellowstone’s grizzly population rebounds, creating challenges and fears

The Man-Eaters of France

Argentina: A "UFO Fleet" on the Shores of the Gualeguay River

Researchers Say New Species Are Evolving at an Unbelievable Rate