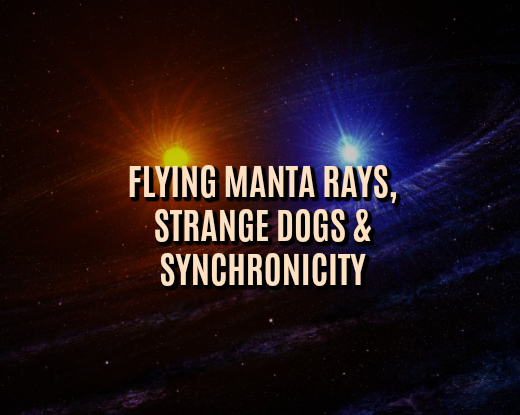 I heard your interview on The Higherside Chats and when you got to the mentioning of potential Manta Ray like cryptids I had goosebumps. There's a chance I've sighted two such things as the mannerisms described and how these things acted as well as the location fits. It just now clicked into place that it has the potential to be a ray, however it was night and the things were about 50 feet up. But here's the experience:

In 2014 I was at Pensacola Beach (Pensacola, FL) staying at a condominium with two friends. It was night and the sky was clear, no clouds or obstructions. Our group of three went down a back path and out onto the beach just to get some air and sit outside. We were in an area with wooden chairs that are always there (this is the best way to pinpoint the location as I can't remember exactly). My friend, whose name I will list as E, was sitting with me on a set of chairs and our mutual childhood friend, whose name I will list as J, was sitting in front of us. After about half an hour J stood up and said he was going to go for a walk. E and I remained in the chairs and continued bumming around but we weren't chatting much.

I noticed out of the corner of my left eye two objects moving from my left to my right, about 50 feet up in the air. They were darker than the sky itself and made no noise. I wasn't really processing this as too strange, perhaps birds, but they started to zig zag in a crossing pattern over each other going back in forth, and continued this down the sky. Before they were out of view E and I both asked the other if we saw them and realizing we both witnessed the same thing started getting excited. The objects looked mainly triangular but were honestly so dark it could've been anything with a flat bottom. The objects didn't seem to be birds as they appeared too thick and moved too straight, unwavering, but definitely gave off the impression of gliding without losing altitude the entire time. They eventually just got too far away to see but were moving too fast for us to catch up. J came back shortly after and we went back to our night, excited but not fixated. We accepted whatever it was it was a UFO by definition of the name.

I should mention (and I believe it was the night before, its vague in my memory) that there was a blinking light out past the pier about 200 feet down the beach. The light felt like it was a star's distance away but the twinkle was shifting through all colors. We took it for granted and it was completely gone after some point that night. Perhaps unrelated completely but I've never seen a star act like that or vanish.

Now all of that seems very one off, something that happened and that's that; however, a month later another experience happened that made this one feel more prophetic.

I was driving E back home from a day out, I can't recall where we went as we did stuff in town all the time, so it was out of the blue. As we approached his neighborhood, which was off at the end of "Kingsfield" road there were two dogs sitting by the side of the road. It was immediately eerie as we approached. I was driving but we slowed down before the turn. They reminded me of Scottish Terriers but felt vaguely off, like how people tend to describe Men in Black. They were identical down to the spots on the shaggy gray coat, and had very lonely sunken eyes. The pair watched us as we rounded the corner and we could both feel the gaze on us and not just the car. E and I were tearing up but acting jovial as we tend to be very tongue and cheek, even in bad situations (which we would escape from quite a few). That was it. Creepy but impacting. Didn't feel right.

Where this all comes together is the relationship between the aforementioned J. I learned a few years later that during the time he was at the beach with us he had started to hang out with a new group of friends. I had a falling out with him about a year later on the same beach over a situation I won't detail but personally ties, things even deeper yet, separates us further in spirit (we are friends again but he feels like an entirely different person). At the same time that split was happening E and I quickly bonded to a point where I doubt we will either meet someone we care for as much as each other in terms of brotherhood and friendship. There has been plenty of synchronicity in terms of dreams with one another, relevant topics, things we discover, and a whole host of other smaller things. I almost didn't write this email but he texted me while I was listening to the part about the ray sightings saying he dreamed about the thing we saw on the beach last night and I felt I just had to share.

Sorry I can't confirm whether or not the things we saw were rays specifically, but as I mentioned, the way the glided felt very much so! NB

The Synchronicity Key: The Hidden Intelligence Guiding the Universe and You

The Messengers: Owls, Synchronicity and the UFO Abductee - I highly recommend this book! Lon

The Ascension Mysteries: Revealing the Cosmic Battle Between Good and Evil

The I Ching Workbook

The Spontaneous Fulfillment of Desire: Harnessing the Infinite Power of Coincidence (Chopra, Deepak)


This post first appeared on Phantoms And Monsters: Pulse Of The P, please read the originial post: here
People also like
What to wear: outfit ideas for Christmas & summer
Best Home Sauna To Stay Warm All Winter
What We Learned from the IIA’s Webinar on Broadband Affordability
Gig Review: Artur Menezes, Malainey’s Grill, Long Beach, CA
Best Things to Do in Cadaques, Beautiful Town in Costa Brava
Urban, Suburban, or Rural Practice: Pros and Cons
Booty Bay Slot from Push Gaming
10 of the UK’s best beach cafes and bars
Drama and beauty, hot sun and cool surfing: how Madeira stole my heart
Charcuterie In A Jar: The Savory Jarcuterie
How do I learn massage?
World’s Largest Airplane in Line to Launch Space Vehicles
6 Work-From-Home Essentials That Will Enhance Your Productivity