Fayose: Banker gives account of how N1.2bn was transferred to Akure 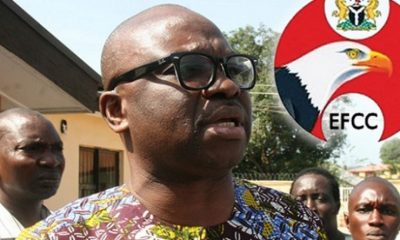 The 11th prosecution witness, Mr Sunday Alade, in the ongoing trial of former governor of Ekiti State, Ayodele Fayose, has given an account of the sum of how N1.2 billion was transferred to Akure, Ondo State.

The witness said he was the Zenith Bank Plc, Akure, Branch manager in 2014 when the N1.2billion was allegedly moved to his branch.

Fayose is currently standing trial alongside a company, Sportless Investment, before the Federal High Court, Lagos.

The duo, however, pleaded not guilty to the charge bordering on fraud and money laundering slammed on them by the Economic and Financial Crimes Commission (EFCC).

Led in evidence by prosecuting counsel, Mr Rotimi Jacobs (SAN), the witness said he got a call from his head of operations asking him to prepare to head for Akure Airport to receive huge cash from a customer.

“On the 17th of June 2014, I was in my office in Zenith Bank, Akure when I received a call from my head of operations, Abiodun Oshodi, that a customer would be coming to make a deposit into his account with the bank.

“He said in order to provide security, we should arrange for a bullion van to go to the airport to pick the cash.

“After an hour, my head, Abiodun Oshodi, came and said the customer had arrived. He introduced Abiodun Agbele as the customer.

“He said we should prepare to go to the airport. I asked for time to arrange for security, but they said that won’t be necessary as they had sufficient security. They came with Mopol and some soldiers in a Toyota Hilux van,” Alade said.

The witness said he joined Oshodi and Agbele to the airport, along with the bullion van and the security men.

“Two of them walked away. The remaining person introduced himself as O. Adewale. The cash was offloaded into the bullion van and we drove to Zenith Bank Akure,” Alade said.

He said when they arrived at the bank, the money was counted in his presence. He said Oshodi, Adewale and Agbele were also present.

“The money was counted. It was N724million. We were informed that there was a balance. We went back to the airport and picked N494million the second time.

“The total cash amounted to N1.219billion. Another aircraft brought the N494million. I gathered that the cash was lodged into three bank accounts – those of De-Privateer, Spotless Investment and Ayodele Fayose.

“I also understand some cash was taken away that day by Mr Agbele.”

Asked who Adewale was, he said: “Adewale O introduced himself as Obanikoro’s ADC.”

Asked if he knew those who walked away from the aircraft when it landed, the witness said: “One of them resembled Obanikoro. I never met him in person. But he resembled the person I saw on television and newspapers.”

Under cross-examination by defence counsel Ola Olanipekun (SAN), and Olalekan Ojo (SAN), the witness said he was not aware of where the money came from.

Asked if he knew what the money was meant for, he said: “Not at all.”

Fayose: Banker gives account of how N1.2bn was transferred to Akure