This is this history website's sixth State of the Blog Address (SOBA). This, however, is not your ordinary blog update. Since its revival in 2014, the Filipino Historian has made it a tradition to showcase to its readers the power of their collective love and support for history. Prior to this, the fifth State of the Blog Address was published to provide an annual report on the progress being made by this history blog. This year, the newly established tradition of publishing an annual address continues with the fourth address. This is the 38th update article published by this history website, and as some may have noticed, the regularity of these articles bristling with statistics have been fairly limited since to pave way for more content to appreciate the discipline all the more. For many who may think this is just some chest-beating and chair-raising, then I am probably doing mine. However, these little victories are owed not only to a single author writing somewhere in the archipelago, but also to the hundreds of thousands of readers who even bothered, because this author may be an army of one, but we have empowered thousands to recognize and appreciate their history. These people must know that they have been part of a larger movement to restore and maintain our national memory, because a nation without history is like a person without memory, an experience without life.

Why October?
It has to be recalled the annual address has been delivered every October of the year, but why? What made this month a milestone to remember? While the official anniversary was in December, it was on October 4, 2014, the Filipino Historian (#FilipinoHistorian) began a massive restoration program first announced on September 29 of the same year. The task was not easy as this blog focuses on a discipline that is not really popular in the Philippines, as exhibited by a previous survey of history in the web. There is also fierce competition presented by older and better organized, although some usually trivialized to the point of near mediocrity, history blogs and websites. What can a "single author writing somewhere in the archipelago" really do? Still, while the situation seemed hopeless for a blog citing its references thoroughly, the revival was on. This is where our story together begins.
In the first two years of this blog, it has recorded a monthly average of 52 views. In the next six years, the blog has recorded a daily average of 301 views (up from 287 views a day as of October 2019 and triple that of 2012-2014 records), and the growth trend continues to hold. In November 2018, for instance, the blog has exceeded 77,000 views in a month, an unprecedented performance which may well reinforce the Filipino Historian as one of the top blogs in the Philippines.

Continuing recognition
Yet, this website began from what we can call level zero. Frankly, it was insignificant compared to the prevailing competition when it re-entered the blogosphere some six years ago. However, as the audience continued to grow, and the traffic began to sustain an upward trend, the Filipino Historian was soon detected in the radars of national and global rankings.

In website rankers Alexa and SimilarWeb, the Filipino Historian continuously ranked in the top 0.2% and top 0.1% of live websites, respectively, as of October 2020. This is the highest level reached by the website since it was ranked in 2015 (for Alexa) and in 2017 (for SimilarWeb), respectively. This means that out of billions of active sites in the internet, this history blog is doing well enough to even be ranked regularly.

Other rankings seem to support the contention of an emerging history website. In Feedspot's list of Top 100 Philippine Blogs, this history blog's rank began at 72nd in December 2017 to 65th in August 2019. It has remained in the rankings ever since. Then again, the Filipino Historian is not included in ASEAN UP's list of top 50 blogs in the Philippines, which was updated as of March 2019.

Mainstream media have also took notice of this lowkey author, as evidenced by his various appearances in and invitations by national and international media (access publicly available videos here).

Top 10 Sites to watch Telugu Movies O…
How to Get a Girl to Have Sex With Yo…
5 Simple Ways to Spy on Android Phone
Chatfuel Vs BotMyWork Chatbot Builder…
GNU: A Heuristic for Bad Cryptography
While it is indeed recognized that history is not a very popular discipline in the Philippines, and the website itself does not appear to consistently rank well across the board, it has to be acknowledged that one history website is making strides to share freely such knowledge for all people.
Ten million miracles in 2022

Early this year, the Double Ten campaign was launched with a goal of 10,000 social media followers and 10 million people reached by 2022. The campaign aimed to follow through the success of 2016's Million Miracles and last year's Five Million Miracles, both of which was met well before the scheduled target. Even though this history blog has been serving the world for more than five years, it only began to permeate social media recently. On October 29, 2014, the official Facebook page of this history blog was launched. To date, the page had exceeded 8800 followers. This means an average growth of 4% per month since the fifth address. While still respectable, it is noticeably slower than last year's pace of 7% per month. However, as a stern note, unlike other "popular" blogs and websites, even those dabbling with history, including vloggers who do not exactly believe in systematically studying the discipline, the Filipino Historian does not, and will not, buy or purchase followers and views for the sake of artificial popularity. Until now, the author has not acquired the website's own top-level domain, which may further boost its search engine optimization. What was achieved now by this single author is hard work, coupled by the irreplaceable support of thousands who grew to love and appreciate history through this medium.

All time statistics reveal that Facebook remains the largest single source of views for this history blog so far. Views from Facebook account for 21% of the total all time views of the blog, down from 25% last year, which exemplifies the diversification drive of traffic sources, albeit the decrease was not as significant as in 2019. The following year, on October 27, 2015, the official Twitter page of this history blog was launched. As believed by this author in the past years, Twitter has been a growth area in contributing to traffic for this blog but traffic from here has also seen a slight difference in 2020 (around 3.5%, up from 4.4% last year). Again, this can be seen as a positive note in efforts to diversify this website's traffic sources.

Apparently boosted by last year's unexpected growth, the Filipino Historian continues to fly high as it seemingly is on track to break yet another record ahead of schedule. As of October 2020, this history website's social media platforms reached 9,196,330 people, almost 50% higher since last year's address. This translates to an achievement rate of 88% for the social media goal and 92% for the total reach goal. Miracle upon miracle has indeed been made, especially since we still have 14 months before 2022. Of course, the service to the people of the Philippines and the world does not end here. This is just the launching pad. As we approach eight years of public service and good governance, despite the relentless attacks of bashers, critics, and haters who try to malign and mislead the people on this author's reputation, integrity, and academic purview being shared to the general public, it is aimed for this website to reach as many as possible to fulfill the greater good of history. More than being a media personality, a dedicated disciple of studies, or a committed public servant is the heart for the discipline and the society making it relevant: the saysay in kasaysayan, so to speak.


A truly national blog for the Philippines
On November 24, 2014, the blog began to officially record its reach throughout the Philippines partially through Facebook. This is the first result received by the blog. Darker areas meant there are more readers within the province. Of course, it has to be considered that the blog had to begin from virtually nothing. This history blog is maintained by a single author writing somewhere in the archipelago.
By 2019, the Filipino Historian has truly become a national blog by having readers from all provinces of the Philippines. Not only from Aparri to Jolo, as the song goes, but literally from Batanes to Tawi-Tawi. It has kept this status since. This may not mean much for many people, but this phenomenon is sufficient manifestation of this website's motto: "Bringing history to the Philippines and the world." As we enter the new decade, shifting towards the digital age, distance learning, and online education, the Filipino Historian aims to reach deeper into all the regions and provinces of the country so more Filipinos would better appreciate and study their history. 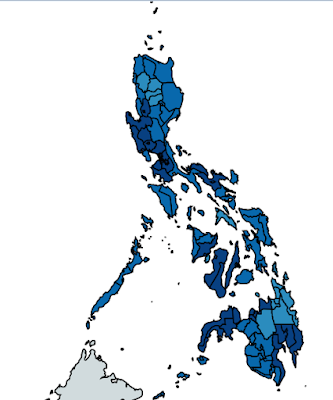 How international is international?
On June 1, 2015, the history blog recognized that it was read in 35 countries worldwide other than the Philippines, and had double- and triple-digit number of visitors in at least six (6) of these countries since the official count began February 3, 2015. Since then, the title International has been added. How has the Filipino Historian fared after three and a half years? As of October 17, 2020, the blog has been read in 92 countries. It also had double- and triple-digit number of visitors in at least 36 countries worldwide, a slight increase from 35 countries last year. Meanwhile, the social media outlets of this blog has followers from 50 different nations, the same as last year. Despite the increasing worldwide reach of this blog, and the diversification of the topics being covered, it is noticeable that 62% of all time views (down from 66%) and 87% of social media followers (up from 86%) still hail from the author's homeland, the Philippines. He is, after all, the Filipino Historian.

The itsy bitsy blog crawling up the Web
The following are some of the screenshots to help visualize how the blog has fared at the top of leading search engines such as Google (4 out of top search entries), Yahoo (1), Bing (4), Naver (2), MSN (1), and DuckDuckGo (3), among others. All the faithful readers and the avid followers of this history website receive the utmost thanks from its humbled author. Rest assured, the quality service to the discipline will forge on in the midst of the threats posed online and offline by those with ill intent.

"Well done, good and faithful servant! You have been faithful with a few things; I will put you in charge of many things. Enter into the joy of your master!"
(Matthew 25:21)