The Best Prime Minister the Congress Never Had

(By way of poetic license I have replaced Firaq with Atal)

“Coming generations will remember us with awe,

I can claim a little more. I knew him. I say so with utmost modesty because there were many journalists who knew him better. But he had a knack of making a chosen few feel special with a smile here and gesture there. Confronting him was always a renewal because your opening question was generally greeted with stony silence, bordering on lack of recognition. Then would come a well thought through response to a question asked five minutes ago. There was no unprocessed response.

Exuberance was not his style but when moved by an idea, he could be demonstrative as at the Hyderabad House banquet when he put his arms around me. “Mainey aap ka lekh parha; kaee baar parha. Maen aapse sahmat hoon.” (read your column several times; I agree with you.)

It was not just a Prime Ministerial approval of a column but the warmth with which the appreciation was communicated. It would have been most unlike him to react to a dry piece on foreign affairs or national politics. What moved the sentimental lyricist in him wa a taboo I had broken by placing Hindu-Muslim issues in a context readers were unfamiliar with.

Communal riots had broken in Moradabad in 1982. I was Regional Editor for The Indian Express with headquarters in Chennai. Nihal Singh, the Editor-in-chief, asked me to “churn out” an edit on Moradabad.

Instead of writing something in a jiffy, I fell back on nostalgia, my life in my village, the cultural commerce which has held society together for hundreds of years. The new political class has taken its eyes off it largely because harmony does not easily translate into votes. In my piece, I listed Mohsin Kakorwi invoking images associated with Krishna to celebrate Prophet Mohammad’s birthday; Maulana Hasrat Mohani’s adoration for Krishna and Radha, in verse and gesture. 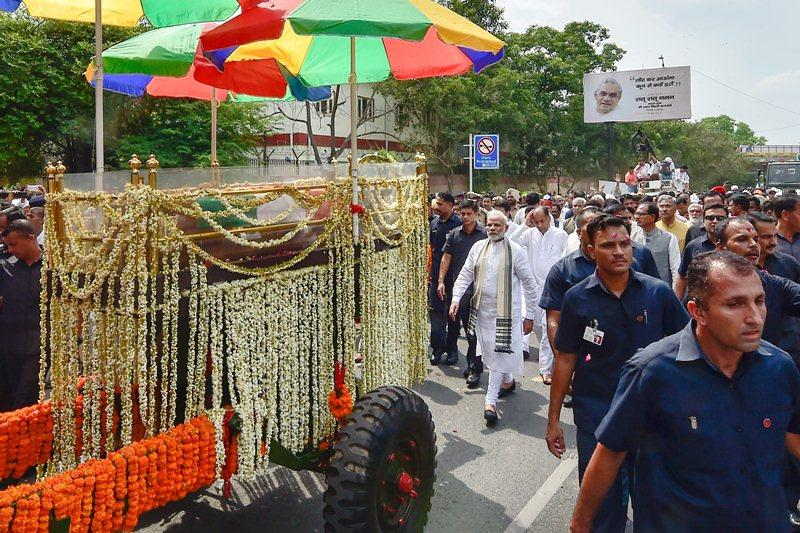 “Ahelia, who had turned to stone because of a curse, was restored to her former self by Your touch. From the animal kingdom You elevated an army worthy of Hanuman’s leadership.

Your reformed a wicked Chandal. “O’Lord Rama, when will You cast your benign eye on me?”

This is from the Sanskrit poetry of Abdul Rahim Khan-I-Khana, one of Akbar’s courtiers.

The list is unending, particularly if you dilate on Hindu poets writing in a similar vein since the 17th century atleast. The latest Noha or a dirge for Moharram is:

Because when the enemy cut off his arms in battle, we Hindus would have raised his banner.)

No, I have not veered far away from Atalji. In fact I am sharing with you a slice of social history in which he was involved.

The late H.R. Malkani, editor of the RSS mouthpiece, Organiser, was the first to write to me. “I salute you” he wrote, “Your piece brought tears into my eyes.” An interview was arranged with RSS ideologue Bhaurao Deoras. Malkani invited me to 10, Ashok Road, for tea with Atalji who was shaking his head in admiration. (Link to the piece http://naqvijournal.blogspot.com/2018/08/in-aftermath-of-moradabad-riots.html)

This gushing of admiration from the parivar was unnerving. Had I by writing one column unintentionally turned my back on my progressive friends? Had I opened myself to the charge of walking the illiberal path? But everybody, and his neighbour, from the Congress to the far left swear by our composite culture, Ganga-Jumni tehzeeb and so on. Do they like the concept only in its haziest outlines? Does the idea get tainted if the Parivar finds it wholesome?

Authors like M. Mujeeb who in his masterly survey, Indian Muslims, has left no aspect of syncretism untouched. But the large body of liberal, Muslim Intelligentsia, scholars, seminarists, writers, columnists had before 1982 chosen to ignore evidence of syncretism strewn all over, the Sufi belief system that Rama and Krishna were God’s prophets sent to India. This the liberal Muslims thought would expose them to the charge of “shirk” or apostasy among the wider, community. The Mullah, unencumbered by such considerations pushed his agenda diligently and with a sense of purpose. The results are there for all to see.

Vajpayee, familiar with Lucknow, grasped the significance of Indian syncretism. But the practical politician in him also saw the liberal Muslim’s hesitations. Not only does he have limited votes he is also intellectually uncertain. Vajpayee had a singular advantage over his peers: he was the most respected member of the Sangh and yet he had evolved along the path of modernism. He slid out of his RSS coil with deliberation; he did not shuffle out of it. If my mother’s test for dependability were applied to Vajpayee, he would emerge with flying colours. “Always mistrust a man without an obvious weakness” she used to say. As he came out of the RSS shadows, the romantic in Vajpayee was given measured play. He loved the good things of life. Heaven knows where he had developed a taste for fried prawns?

Towards the end of 2003 he made up his mind to resolve “regional quarrels”. Ofcourse, losing the 2004 election was a huge setback. But what rankled with him was the Pakistan, Kashmir imbroglio: a solution along the line of control was almost within grasp according his Principal Secretary, Brajesh Mishra.

Did Vajpayee have a model? K.K. Katyal of The Hindu, myself and one or two others trailed him on the first day he entered his South Block office when he was appointed the Minister for External Affairs in the Janata government led by Morarji Desai in 1977.

We asked him how he felt occupying his first office in South Block? He summoned up the poet in him. Misty eyed, he said he had difficulty controlling his emotions. “I cannot believe that I am about to occupy the chair which was once occupied by Pandit Jawaharlal Nehru.”

The post The Best Prime Minister the Congress Never Had appeared first on APN Live.

The Best Prime Minister the Congress Never Had