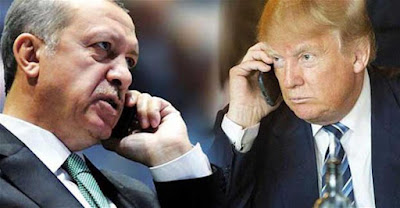 President Tayyip Erdogan said on Friday he would try to convince Donald Trump next month that Turkish-backed forces should be used to retake the Syrian city of Raqqa from Islamic State rather than Kurdish militia Ankara views as a terrorist threat.
Erdogan said Washington's support for Kurdish YPG fighters damaged "the spirit of solidarity" with Turkey, but that he believed a new page would be turned in ties under Trump, whom he will meet in mid-May for the first time he became president.


Turkey has long been annoyed by U.S. support for the YPG militia, seen by the Pentagon as a reliable partner in Syria but by Ankara as a hostile force linked to Kurdish PKK militants who have waged a three-decade insurgency against the Turkish state. It is particularly frustrated by the use of YPG fighters in a planned U.S.-led offensive to retake Islamic State's Syrian stronghold of Raqqa on the northeast bank of the Euphrates river, an operation Ankara has long sought to join.

Why are we asking for help from terrorist organisations? We are here," Erdogan said at an energy conference in Istanbul. "Turkey, coalition forces led by the United States and the Free Syrian Army all together can wipe them (Islamic State) out. This is not a difficult thing for us," he said.
I believe we can achieve this and I will tell this to Trump."
Ankara fears creation of a contiguous Kurdish-controlled territory along its southern frontier that it believes could be used to support insurgency in Turkey and promote ambitions for a Kurdish state incorporating Turkish land. It aims to end all Kurdish military involvement west of the Euphrates.