Is your loved one in a nursing home? Here's why you should be alarmed 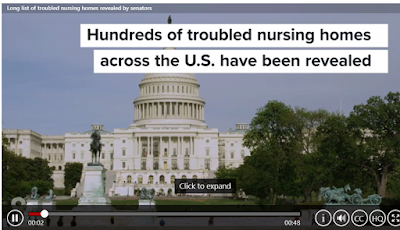 Editor’s note: The opinions in this article are the author’s, as published by our content partner, and do not necessarily represent the views of MSN or Microsoft.

All Americans should be deeply troubled by news that hundreds of nursing homes with a "persistent record of poor care" were kept secret by government authorities.

They should be equally alarmed that, although the Trump administration says it really cares about this issue, the reality is that it has relaxed oversight of the industry, potentially placing seniors in jeopardy.

It's a matter that goes way beyond the estimated 1.3 million people now in nursing homes. As the median age of the U.S. population steadily rises, more and more of us will be turning to senior care facilities for aging parents and, eventually, ourselves.

"You'd like to think you could expect high-quality care, but that's not the case," said Eric Carlson, an attorney with Justice in Aging, a nonprofit organization focused on senior poverty.

"People should be worried - not sky-is-falling worried, but I-need-to-do-my-homework worried," he told me. "You can't take anything for granted."

A report issued last week by Pennsylvania Sens. Bob Casey (a Democrat) and Patrick J. Toomey (a Republican) listed nearly 400 nursing homes that the Centers for Medicare and Medicaid Services had cited for substandard care but had never named publicly.

Twenty-eight such nursing homes are in California, many in the Southland. I reached out to a few of them.

Some, such as Long Beach Healthcare Center, took a message but never got back to me. Others, such as Santa Anita Convalescent Hospital, offered a brisk "no comment" and hung up.

You can see the full list in the report, "Uncovering Poor Care in America's Nursing Homes."

"In such facilities, some residents have experienced outright neglect, such as going without proper nutrition or languishing in filthy conditions," the report says. "Some older adults and people with disabilities have even experienced physical abuse, sexual assault and premature death."

Lori Smetanka, executive director of the National Consumer Voice for Quality Long-Term Care, an advocacy group, said it shouldn't have taken congressional action for the names of questionable nursing homes to be revealed.

"The fact that this information wasn't reported before is concerning," she said. "Consumers need the full range of information available to make the best decisions."

Only a few months after President Trump took office in 2017, his administration announced it was acceding to requests from the nursing home industry and changing how fines are levied for regulatory violations.

Rather than fining a nursing home for each day it was out of compliance, which was typically how things worked under a tightening of rules under the Obama administration, Trump's White House said a single fine would be imposed for any infractions.

This softened the blow of regulatory crackdowns and minimized a key incentive for nursing homes to quickly remedy troubles.

The Centers for Medicare and Medicaid Services oversees all such facilities that receive public funds.

In response to the nursing home report, Goodrich said the agency "welcomes the recent attention on nursing home quality of care that has amplified the important national dialogue." She said CMS Administrator Seema Verma, a Trump appointee, "has made ensuring quality care in nursing facilities a priority."

If this report reflects Verma's best efforts, old folks are in serious trouble.

While CMS discloses the names of about 80 nursing homes with documented problems - the agency's so-called Special Focus Facility program - it has for years kept under wraps hundreds of other facilities considered "candidates" for closer scrutiny.

Casey's and Toomey's report names the nearly 400 candidate nursing homes and says they were "indistinguishable" in terms of quality of care from identified "special focus" homes as of April.

A Kansas facility "failed to give a resident their prescribed medication for 12 days after the person was admitted." A resident of a Michigan nursing home "who had his catheter removed bled through the night, and when he was finally taken to the hospital the next morning, he passed away."

A nursing home in Texas "did not prevent the septic system from backing up, causing a foul-smelling black substance to come through the drains, seeping into the kitchen floor in close proximity to food preparation areas. The facility continued to serve food to the residents from the kitchen."

Again, the identities of these nursing homes were kept secret from the public, meaning that families seeking care for elderly loved ones wouldn't have known of the incidents regardless of how much due diligence they performed.

In response to last week's report, CMS said it would start releasing the names of candidate nursing homes along with special focus facilities. It said the greater transparency would begin "soon."

That's a step in the right direction. Other resources to keep in mind:
"Visiting in person is the best way to learn about a center and be sure it's the right fit for the consumer's care needs," said Dr. David Gifford, senior vice president of quality and regulatory affairs for the American Health Care Assn., a trade group for the long-term care industry.

Smetanka at the National Consumer Voice for Quality Long-Term Care said it's a matter of trust. "You need to be able to trust that the places you're looking at for loved ones will provide the care you require," she said.

Such as keeping Grandma off the train tracks.

David Lazarus is an award-winning business columnist for the Los Angeles Times, focusing on consumer affairs. He also appears daily on KTLA-TV Channel 5 and is a part-time radio host. His work appears in newspapers across the country and has resulted in a variety of laws protecting consumers.

Full Article & Source:
Is your loved one in a nursing home? Here's why you should be alarmed

Is your loved one in a nursing home? Here's why you should be alarmed