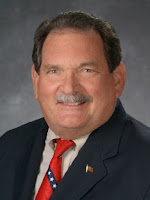 A Phoenix-area justice of the peace faces nearly two-dozen charges of ethical misconduct, including accusations he used court resources to boost his political campaign, failed to report campaign donations and solicited corporate sponsorships for "Breakfast with the Judge" events, according to the Arizona Commission on Judicial Conduct.

Break Da Bank Again Megaways Slot Rev…
9 Tips for Writing an Engaging Resume
Why Furries Make Excellent Hackers
Twitter Opens Account Verification Pr…
Teen Depression: Essential Signs & Ho…
Clancy Jayne, head judge of the Desert Ridge Justice Court since 2008, has received warnings or reprimands by the commission at least eight times during his eight-year tenure, not including the new allegations. The Desert Ridge court precinct covers parts of north Phoenix, north Scottsdale, Cave Creek and Carefree.
Jayne is set to leave office in January after losing the Republican primary race in August to Cathy Riggs, who was endorsed by Gov. Doug Ducey. Riggs is unopposed in the Nov. 8 general election.
Jayne drew attention just before the Aug. 30 primary after blasting Ducey in the Yellow Sheet Report, a political tip sheet published by Arizona News Service. Jayne said he was "beyond pissed" by the endorsement and described Ducey as a "son of a bitch" who did "gofer" work decades ago when Jayne was head of Gilbert Days.
The public comments are part of the 74-page statement of charges filed by the commission's disciplinary counsel, April Elliott, against Jayne in October as they "cast doubt on his temperament and fitness to serve as judge."
Although Jayne only has two months left as justice of the peace, Elliott recommends the Arizona Supreme Court censure, suspend or remove Jayne from office and assess attorney's fees against him for "conduct ... that brings the judicial office into disrepute."
Jayne, in a formal response filed by Mesa-based attorney David Brooks, denies the accusations of misconduct and argues there is no basis for discipline. Brooks did not respond to a request for comment.

The state's disciplinary counsel questioned Jayne's use of other judges' email addresses, which it argues are not public, to invite officials from around the state to his "65th birthday party" at Turf Paradise horse track, where Jayne charged $50 per person and held an auction to benefit his re-election campaign.
More than 100 people attended, and the auction featured more than 50 items, including "artistic golf putters," and "raised more than $5,000 to kick off" his campaign fundraising, according to an update on Jayne's website cited by Elliott's report. Campaign-finance reports for that period, however, list $1,567 in donations at the event and no in-kind contributions, according to Elliott.
Jayne, in his response, argues that the judges' email addresses are public information and says that judges often use court email addresses to communicate with third-parties about non-judicial matters. Jayne contends the email invitation, sent from his campaign, was an effort to abide by the Arizona Supreme Court's advice to be "proactive in communicating with the general public, elected officials and other government entities."  (Click to Continue)


This post first appeared on National Association To Stop Guardian Abuse, please read the originial post: here
People also like
Break Da Bank Again Megaways Slot Review (Microgaming)
9 Tips for Writing an Engaging Resume
Why Furries Make Excellent Hackers
Twitter Opens Account Verification Program For Everyone; Here’s How You Can Apply
Teen Depression: Essential Signs & How Parents Can Help
7 Reasons Why You Should Hire A Female Divorce Attorney
An Officer and a Spy
Email Lookup
“The Friend Who May Not Seem a Friend” – The Cat and the Fire, Post 2 of 3
MICRO BUSINESSES