8 Non-Photography Items To Take on Your Nature Shoot

OK, so you want to go out and get some nature photography.  While we could write an interesting article about what Camera Gear to take on a nature Photo Shoot outing, that's not what we're discussing here.  Instead, let's talk about things you should take with you whenever you go out into the back country, even just a little way, with an eye to keeping it light so you can haul camera gear easily too.

CBD 2020: What to Expect + Our Top Pr…
Highlands, Buttermilk Opening and Sum…
BCH has Latent Potential to Rise by 1…
‘Tights not Obligatory’ says Theatre …
Nusa Islands vs Gili Islands 2020 {Wh… 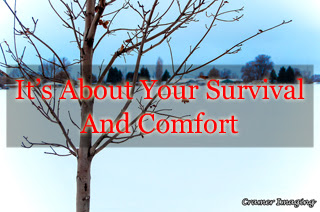 Going on a photo shoot is about your survival and comfort too.First off, I'm assuming you have what you normally carry: your keys, your wallet, your phone, etc.  Since you're going out to photograph things, it is also likely you're going to have your standard assortment of 20+ pounds of photography equipment: camera, lenses, tripod, and all.  It wouldn't be much of a photo shoot without your gear.  This camera gear in tow will require a trade-off in weight for the basic survival needs and comforts you carry with you.
The items we list here are things which will either make your trip a little more pleasant or perhaps they might save you if something bad happens on your trip.

8. A Gun (Or Another Way To Protect Yourself)

Some people may have moral or ethical objections to possessing a gun.  I don't want to argue the pros and cons of gun possession here.  If you choose to use one, keep in mind what your local laws are.  Guns aren't allowed in all areas.  Some jurisdictions and countries don't allow them at all.  Also, keep in mind that you have to carry it along with your gear so make that decision wisely.
Now on a photographic outing, you probably won't need a gun.  However, depending on where you're going, you will need a way to defend yourself from local wildlife.  You could go with some sort of deterrent like a noise maker or something more active like bear spray.

For some locales, such as bear country, a robust firearm may indeed be the best option.  Check your local regulations and with fish and game for advice on what to carry for protection in the area you will be visiting.
If you do opt for a gun, keep in mind that the most easily carried guns aren't particularly effective on large animals and a large game rifle is kind of heavy and bulky.

Modern American culture has moved to think that a knife for carrying whether a folding pocketknife or a fixed blade sheath knife is only useful for a weapon.  This is a false belief.  While knives can and have been used as weapons, guns are far more efficient for that particular purpose.  Knives are for cutting things.
If you need to cut away some pieces of brush to get a nice shot, you want a knife.  If you need to make kindling for a fire, a knife helps.  Even back in civilization, opening those sealed plastic bubble containers is made easy with a good sharp knife.
If you start carrying a knife, you'll go from wondering why you would ever need one to using it multiple times per day for simple mundane tasks.  We each have at least 1 or 2 knives on our persons at all times.

If it gets dark on your trip, which it very well could, you will need light to see by.  Decent flashlights are cheap and easy to find.  LED models have a fairly long battery life and can produce more than enough light to do what you need.  You can easily store one in your car for times like this.

If you want a better light source, high end flashlights can light up a whole mountainside if necessary and can even be used as a way to signal rescuers at night.  Generally, I go with a good flashlight in a holster on my belt.
Some people like the flashlight app on their phone.  Why the phone needs a special app, which usually sends back all sorts of personal information, just to turn on a bright LED on the phone case is something I don't understand.  Even if it isn't stealing personal information, keep the phone separate.  If something goes wrong, you want to save your phone battery.  It will help you communicate with rescuers and, even if you can't call out, can be helpful in locating you if it still has power.

Why would you want to burn anything?  In the 21st century, campfires, except in certain prepared locations, are frowned upon but, if you're stuck, you need a way to keep warm.  Fire gives both light and warmth.

Matches are the traditional fire-starting method, but matches get wet easily and you need a waterproof storage container to keep them in so they don't get ruined.  If you use matches, get the strike anywhere so you don't have to worry about putting the striker in the waterproof container too.
A lighter is also cheap and, while not immune to problems with getting wet, is less susceptible to the issues of water.  A hot spark fire starter, which can go on a key-ring, is generally only a couple of dollars and can start a fire.  They're harder to use and you'll need some practice but they work.  A magnesium block fire starter is a bit better.
The magnesium starter uses the same idea as a hot spark but also has a nice large block of magnesium you can shave off and use as tinder.  Magnesium burns very hot and will even get damp kindling going.  Be sure to buy one of the good brands and not a generic Chinese-made knock-off because some reportedly have other materials mixed in with the magnesium and a pile of shavings won't start, even with a match.

Always have water in your car particularly if going onto back roads.  If you leave your car to go any distance at all, take some water with you.  You can live for weeks without food but you can live about three days without water.  You'll last less time if it's very hot.
Some advocate for water purification and that can be useful too.  Purification only helps if there's a source of water to begin with.  Some people get the idea that it's fun to take alcohol with them.  If alcohol is your thing, that's your business, but drinking anything alcoholic when trying to hold off dehydration is a bad move.  Alcohol will actually dehydrate you faster.  We have a case of bottled water and a 5 gallon jug in our car trunk.

Food is important.  While not quite as important as water, food is your body's fuel.  When it's warm, food gives you energy to keep going.  When it's cold, food can help you stave off hypothermia as your body burns it to keep you warm.  For emergency situations, take food with you that is very high energy.  This means taking high calorie food.  I don't care if you're on a diet.  If you die, it won't matter how skinny you want to be.
Carbohydrates are best choice as they burn very quickly to give you energy.  In the winter, you want a supply of simple sugars to give your body's furnace a jump start.  You probably won't need a lot, but a few energy bars or even candy bars will go a long way in the outdoors.

Knowing where you're going can be important.  A compass and the training to use it (don't worry it's not that hard) can help you if you do find you need to hike out of somewhere.  While a compass is far less useful without a map, you can still use it to keep track of which direction you're going.  Also, buy a decent compass.  You can buy one for under $5 if you want a simple and reliable compass.  If you want better, the price goes up.
Why not just use the GPS on your smartphone?  Do so if you can.  Remember that everything you do on your phone costs battery and, if you can't charge it, you lose the GPS and compass when it dies.  Bring a low tech backup.

1. Noisemaker Or Other Signal Device

A whistle or similar way to make a loud noise (louder than you can shout) can help signal to someone that you need help.  Three blasts in fairly fast succession is considered the universal signal for needing help.  Hunters will fire three shots quickly to attract attention.  If you have a gun, you already have this covered as long as you still have ammunition.
A whistle will last far longer than your voice will.  Whistle blasts will carry much further than your voice will too.  Even if you have a gun, a whistle is still a good idea to bring as a backup.  They don't take up much room on your key-chain or around your neck.

All of these items will help keep you alive and comfortable in the great outdoors on your landscape or nature photo shoot.  We know that this is not all you will require while out in the field taking pictures.  This is why we will be discussing more next week.  Tune in again, same time and place, for part 2 of non-photography items you need with you on your nature photo shoot.
Do you have any experiences out in the field where having one or more of these listed items with you helped?  Share your stories in the comments below.  We would love to hear how preparation saved you or made life easier for you.

8 Non-Photography Items To Take on Your Nature Shoot