A couple of months ago, Maya Fairweather was walking through a park with she and her boyfriend’s five-month-old Pit Bull Puppy when a man knocked her to the ground and attempted to rape her. But before he succeeded, little Apollo chomped down on the man’s leg. When an animal rights activist heard this news, she organized an event to celebrate a wonderful deed by a much maligned breed. 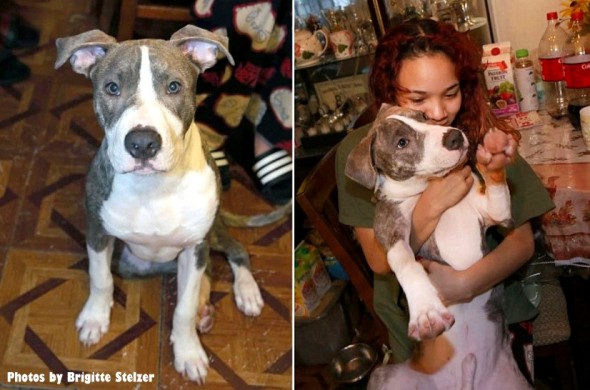 “He’s a good boy. I think he saved my life,” the 18-year-old woman said.  “He was protective.  I think it would’ve been a lot worse. I wouldn’t have been so lucky.”

Maya had been at boyfriend Carlos Guzman’s Brooklyn apartment on the night of November 28th when she decided to take Apollo for a walk at Red Hook Recreation Area Park.  She put on her headphones and let Apollo off his leash to romp around for a bit. 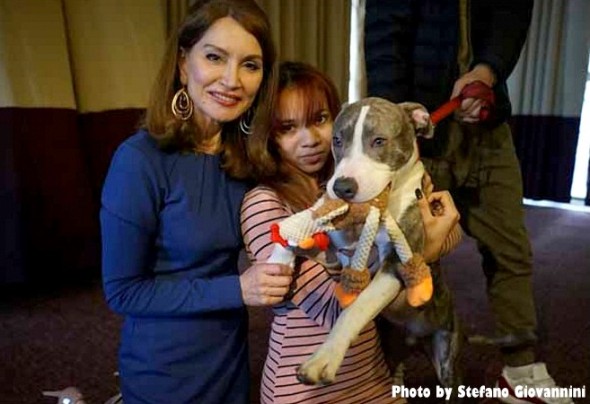 “I felt someone pull my headphones,” she told the New York Post. “I thought it was my boyfriend grabbing me, so I turned around and smiled – but it wasn’t my boyfriend.”

The man grabbed her by her jacket, forced her to the ground, and tried to remove her pants.  He must not have realized that a ferocious puppy was lurking nearby, ready to pounce.

“I fell down on my hands.  I just closed my eyes because they say that if you see their face, they will kill you. I froze. I was really scared,” Maya explained. 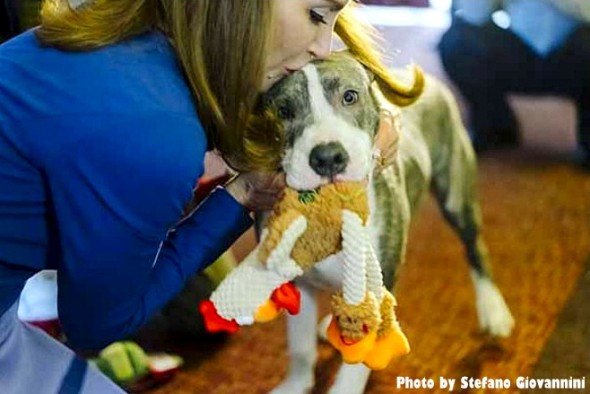 “Apollo helped me; he came and bit him in the leg.  I heard him say, ‘Fuck!’ and I was able to run away. I ran across the street.”

Back inside the apartment with Apollo at her heels, Maya was consoled by Carlos’ sister, Destiny, who took her to a police station.  Unfortunately, the attempted rapist, a man in his twenties, has still not been identified or caught.

“I wasn’t there, but I know that that dog saved her life,” Destiny said. “If it wasn’t for that dog, things would be a lot worse. [Maya is] tiny.” 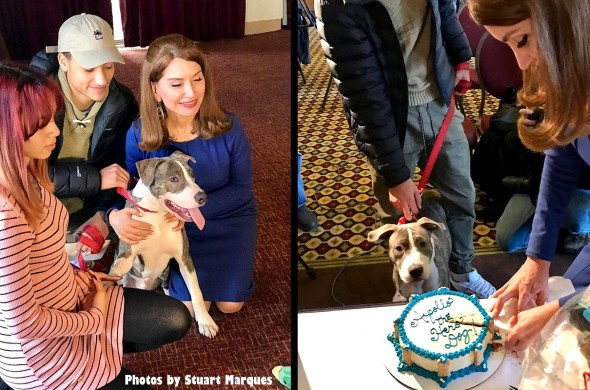 When the story made headlines, philanthropist and animal advocate Jean Shafiroff teamed up with the Nassau County SPCA to honor Apollo.  She knows that pit bulls get a raw deal because of the actions of some.

“Unfortunately, pit bulls are terribly discriminated against,” she said. “This dog acted in self-defense, and he saved this young girl from being sexually assaulted. That in my mind is a hero dog. We want to celebrate this dog.”

And so they did.  Apollo, Maya, and Carlos were escorted to the Hotel Pennsylvania in a limousine, where they were presented with a cake from Dog Cakes for Dogs, toys, and gift cards for pet stores and groomers.  He was also taken to get a massage at the Dog Nanny, and his humans were treated to a meal at Vero, a restaurant on the Upper East Side.  Apollo loved being doted on that afternoon. 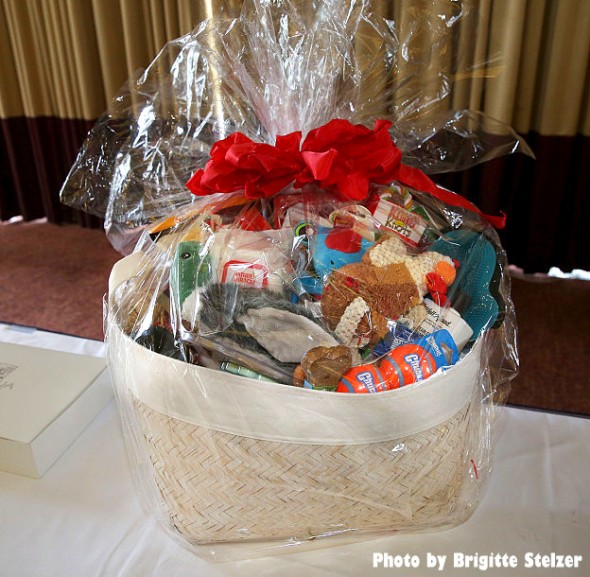 “Not all pit bulls are bad. Pit bulls get a bad rap,” said Gary Rogers of the Nassau County Spca.  “They are smart and lovable dogs. This really illustrates the very strong human bond between a dog and its owner.”

He concluded by reminding people that shelters in Nassau are full of pit bulls dumped by owners who can’t be bothered to train them.

“We can help guide owners to train their dogs.”