His front feet are the problem children & he developed some pretty deep sulcus splits in both frogs, out of which I started getting some smelly not-goodness.  The Thrushbuster was having little to no effect & Dr. Bob told me that all those thrushy micro-organisms can & do develop a resistance to iodine.  It was time to set out on a quest for something new.

علاج فطريات الفم في المنزل
Top (IAS) Civil Services Interview Qu…
Decorating With Earth Tones
3 Strange New York Bees Homeowners Do…
Top Mobile Money Transfer App
I proceeded to read the ingredient list & reviews of every thrush product ever formulated, searching for something non-iodine, but demonstrating real effectiveness without requiring long soaking or specialized boots.  Funny side story & spoiler alert:  I ended up at one of the same conclusions as L. Williams, who wrote up a great account of her experience recently!

After extensive reading, I decided to try Pure Sole Hoof Mud.  I'm always a little hesitant about things that scream "ALL NATURAL FROOFY" or whatnot, that sound like someone just concocts it in their basement & then sells their placebo for a bunch of money.  However, one of the primary ingredients is apple cider vinegar, which is an acid with well-documented effectiveness against thrush, along with zinc oxide, which is a good moisture barrier. 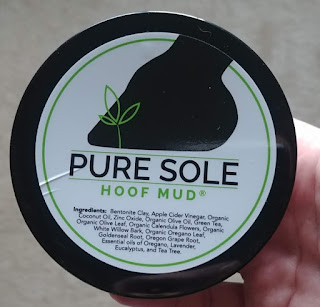 It's extremely easy to use.  I love that I don't need gloves & it doesn't make me all sticky or dye me purple.  It has a perfect, dry clay consistency so you can pack it in to cracks & crevices easily.  I kneaded it deep into those sulci, where it generally stayed for about 24 hours or so.  I've been using it in nasty mud & wetness with no issues.  When the horse puts his foot down, the clay just gets shoved deeper in there.
Even better, IT WORKED.  I applied it daily for a few weeks, although that may have been overkill with the acid, because I did see a little frog degradation.  But no more stinky funk.  I backed off to using it once every few days, more often if it's rainy, just in the crevices as a preventative.
I bought the smaller tub & have used probably 95% of it in 1.5 months, but it will take a little while to use up the last 5% now that I'm using less of it less often.  I did already get a new big tub, so now I'm prepared for the microbial apocalypse.  The clay itself seems very stable, the consistency has been the same whether it's warm or cold & it's definitely been out in the shed when it's 20F.

The only thing it didn't succeed at was sticking to the outside of the hoof wall or white line.  I wanted to see if it would help Echo's toe that is prone to separation, but the clay won't stick to that by itself, it falls off or gets rubbed off in about 4 seconds.  But for areas in & around the frog, worked great.

Two hooves up from us (technically eight, because I did put it on some other spots on Echo's feet too).