Reviews brought to you by Erin the Cat – Mystery and Adventures in Middle Grade reading.

Hello and welcome back to the blog for my Saturday Book review. But first a brief update.

After a week or so of stress and strain, rain wind and scorching heat – caused mainly by a leaking lavatory roof, then over active central heating system, Mrs H finally had time to get her flu jab. What a relief it is. Though with some tiring side effects and a mild cold, she hasn't been able to do much around the palace. I did however manage to get her some light relief in the form of plough the fourteen acre field up the road, using horse power rather than diesel. "We allhave to do our bit for the environment!" I said, pushing her out the door with her packed lunch thermos and a scarf.

benefits of dark chocolate
What to wear: outfit ideas for Christ…
Online Massage Therapy Courses, are y…
Karen Wiesner: I Have Dreamed a Littl…
Barracuda beach Lagos: Fun things to …

Anyways, I am sure after that she'll be as right as rain, and up to making my supper on her return!

Till then, it gives me great personal pleasure to introduce a firm favourite here at the Palace – Max the Detective Cat.

This week we review:-

These three books are published by 'Nosy Crow', an Independent Publisher. A link to the books on their website can be found HERE. 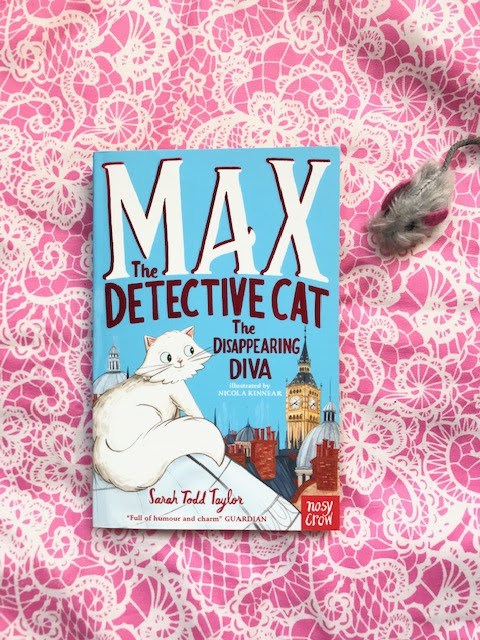 Max is a much pampered, and some may say, pompous fluffy white cat who has spent his days in the lap of luxury. Sat on velvet cushions, he enjoyed the very best salmon souffle off silver dishes. He was pampered at least six times a day by his beloved Countess Arlington. Sounds just my sort of life!

Things really couldn't be nicer for a London cat in the company of the highest of high society. Oh, but they could be worse, far, far worse, as he soon finds out.

After a mishap with a spider and a potted plant, large amounts of dirty pawprints around the townhouse, he ended up in the kitchens. There he discovered some mice and caused such chaos he ended up covered in cooking fat. After that, Max finds he's no longer in favour. In fact, much to his confusion, he's no longer in the house at all. Suddenly he is in a cat basket and destined to be dumped in the river!

Unhappy with the strange and smelly surroundings, Max busts out of his basket and heads off into the night. Of course, Max isn't at all what you'd call streetwise. And London is not a hospitable place. It is also smelly to the extreme if you are a cat that was used to pot-puri! Hungry and scared of the street-cats the maids said would make mincemeat out of him, Max takes refuge under a bridge.

He hears a voice from the gloom, which turns out not to be trouble but Oscar, a one-eyed and ragged eared black cat. But he is kind and generous to Max, who is clearly not from that part of town.

Now, Max thinks he's seen lots from his cossetted life and window-side view. But Oscar shows him otherwise by taking him on a trip across London's rooftops. The two soon end up sitting beside the glass dome roof of the Theatre Royal. It is home, Oscar says, of the finest ballet, music, and acting in the world.

Now, it is at this point that the adventure really starts. Max ends up in the theatre itself and, after some first-class mousing, gets accepted and —

Of course, if I told you much more, where would the fun be, right? Suffice to say, this story is really engaging and fun. There is a lovely array of characters that will grow on us in the following two books.

There is a mystery to unfold involving stolen gems, a lumpy and seemingly dreadful actress and sporano named Madamme Emerald, and a rescue in a seedy part of London. Follow the clues or just enjoy the ride as Max and Oscar set out to save the day.

Unlike my stories, Max and Oscar cannot converse with humans. This makes for some fun bits of meowing dialogue and breathtaking action from our two protagonists. 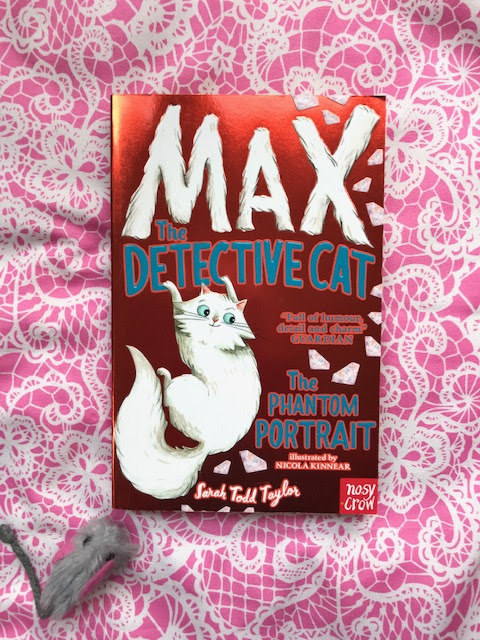 Max, Oscar and the cast and crew of the theatre decamp from London to Sussex and Lord Fawley's castle to give a special, one-off performance in celebration of his daughters birthday. Along the way their car swerves, and both Max and Oscar get thrown out the window and get left behind. They have to trail through a scary night haunted by owls and other worrying sounds (like the shrill squeak of mice, all of which scare Max!) until they eventually find the castle, and safety.

It should be a fun outing, and everyone is looking forwards to not only their own show but the other entertainment that includes a masked ball. BUT Max soon senses there is something amiss in the castle when he hears footsteps beside him but there is nobody there. It seems there is a ghost in residence and a haunted portrait, some long lost diamond tiara, and a prophecy of doom should the castles old and locked up theatre is reopened – the very same theatre the cast and crew will perform in!

Not long after some ghostly terrifying experiences, a last minute guest arrives in the form of Antonio, a 'physical researcher' ghost catcher. Too much of a timely coincidence?

Max thinks not and gets embroiled in a perilous, and to quote the book, "HAIR RAISING" ghoulish mystery to enthral us all. 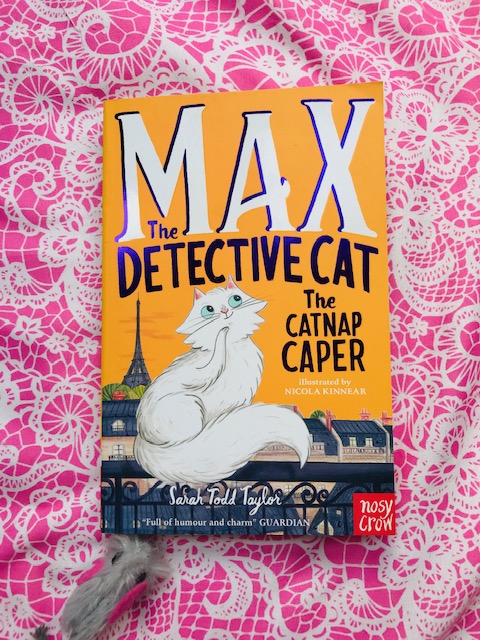 Max and Oscar head to Paris to visit Madam Emerald, the renown . With them go Agnes and Sylvia (two of the Theatre Royals talented chorus). They are all accompanied by Monsieur Lavroche (the Royals manager) and Mrs Garland (the costumier). Madame Emerald happens to be one of the judges in the most prestigious singing competition in Europe – The Voice of Paris – which is down to the last 4 competitors.

The thing is, whilst the famous of France mingle socially at that event, their precious jewels are being stolen by a particularly clever thief! Worse still, the much loved feline companions of these well to do are being napped whilst they nap! Add the fact that the competition is brewing some serious rivalry, and you have set the scene for this adventure.

When Max hears of the catnapping, he knows from the tingle in his fluffy tail that there is more to this than meets the eye. And that this is a case HE needs to solve. Working against the clock, Max's investigation will take high into the sky, and across the rooftops of Paris in pursuit of clues and the kidnapped felines.

As the third and currently last in the Max series, this is not to be missed!

OK, so what did we think?

There are currently three adventures featuring Max. And Mrs H and I loved them all. Whilst the books are aimed at the 7-9 age group, they provide a refreshing, fun, quick read for adults and feline lovers everywhere. They are also beautifully illustrated. All credit to Nicola Kinnear for such fun images throughout the books which capture the essence of the writing superbly!

I loved the way Max, the youger cat, and Oscar the worldwise senior cat, build such a strong relationship, and how, in the thick of an adventure, they still have to get the message across to the humans. Dealing with humans when you are one is bad enough, but when you're a cat it is a minefield!

Sarah Todd-Taylor really has given us a miniature feast of entertainment featurng some great charaters and locations with a lovely period feel to Max's world. Top Marks, and we can but ope for another adventure.

Should you buy this series?

If I have wetted your appetite, then ABSOLUTELY. The books are easy to read, and a fine present for any young reader moving up the ladder.

If you do chose to by a copy or all three, then please do chose to buy from your local indepenent book shop where you can.

OK, so that is it from us this week. We'll be back in a week or so time with another great book. Until then, stay safe, and most of all, enjoy yourself immersed in a good book!