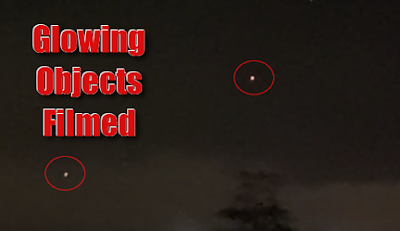 On 10/23/20 two glowing objects were filmed moving slowly west to east. This was captured in Guildford, GB.

As the video progresses the object on the left seems to pick up speed and begins to travel at a noticeable difference.

Here is the video with some enhancements, follow by more details from the witness.

Here is what the witness reported:

"Event lasted for approximately 1 hour. I was just out for a walk around the local playing fields.I witnessed more than 10 large red-orange glowing Orbs, like fireballs. the orbs appeared either singly or in pairs, at the same point in the sky each time, and they "popped out". No flashing or taillights and absolutely not helicopters or planes, which are both common appearances where I live and easily distinguishable.

From the ground they had an apparent size roughly 1/4 that of a full moon, just bigger than an aspirin. Each pair of orbs moved in a west-to-east direction and disappeared after moving around 20 degrees eastwards.A few minutes later the orb(s) would reappear at the same original point and move in the same direction as the previous ones.

There was also some strange pulsating lights in a cloud moving in a geometric pattern which accompanied the sighting. I was able to capture some footage on my phone but the quality is not great due to night-time and lack of tripod - and my total shock at seeing this!

The first video shows a pair of these orbs, the second shows the strange pulsating in the clouds, as well as another orb taken around 10 minutes after the first video."

This is a very interesting report and the video captured is pretty good.

Have you seen anything similar?