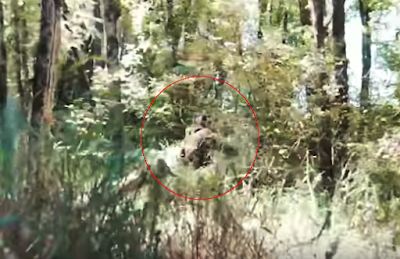 Bigfoot Filmed During California Wildfires?
As most of you know, California and Oregon have be ravished by wildfires. A video emerged that reportedly showed a Bigfoot that was moving out of an area due to near by wildfires.

This video appeared online, on Youtube, on Sept. 9th, 2020. Please watch the video and read my thought and comments below the video.


Okay, so if anyone would look at this objectively it is easy to see this is a total fake. But many just want to see a Bigfoot so badly that they will accept anything, we can't do that. First we have no idea, at least I don't, of who filmed it, why they were out there or just where it was filmed. There are almost no details about the origin of the film, other that its a "Bigfoot feeling from wildfires." 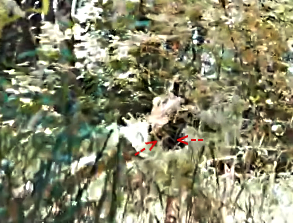 If you will take the time and watch it, go frame by frame if you have to, you can easily see the wrinkles in the suit as the "creature" walks. I took a couple frames from the video and hightlighted a few of the wrinkles.

At one point you can see a big wrinkle/fold line going down the back from the right shoulder.

This is filmed in 4K but the quality is very poor, it must be a very low enc 4K camera.

My guess is that this was just created to make some cash and get views on YouTube. We all know, there for a little while, the wildfires were a very hot topic, no pun intended. Add that to the popularity of "new bigfoot footage" and you can possibly have a viral video. This video, at the time of this posting, has almost 63K views.

As for other claims of other entities and dogman in the video, that is just wishful thinking. What people are seeing is digital artifacts, shadows and light reflection.

In preparing this, after I had wrote my thoughts and analysis, I discovered that in fact this was a prank pulled by the youtube channel NELK. It seems it was all planned to see if they could fool a "bigfoot expert" and they did.

Here is that video. Hopefully this closes the books on this one.
(Language warning, and you will probably want to skip the first few minutes.)


I know the Bigfoot expert that was hoaxed/pranked. He is a nice guy and in a way I feel sorry for him. This is just another reason we people who research and believe in Bigfoot must keep our guards up and not be so eager to believe every video.

While these guys were playing a prank, which I don't think is funny, there are many out there that do this just as an attempt to embarrass bigfoot investigators. I know we personally had a "witness" fake tracks and call us out to their property. Our field researcher quickly spotted the tracks as fake and called the witness out on it. The witness became hostel and some heated words were exchanged. I'll leave it at that. No one is above being fooled but I can assure you many bigfooters are pretty schooled at bigfoot evidence. We have real world experience and know things to look for, so don't get mad if they bust your hoax.