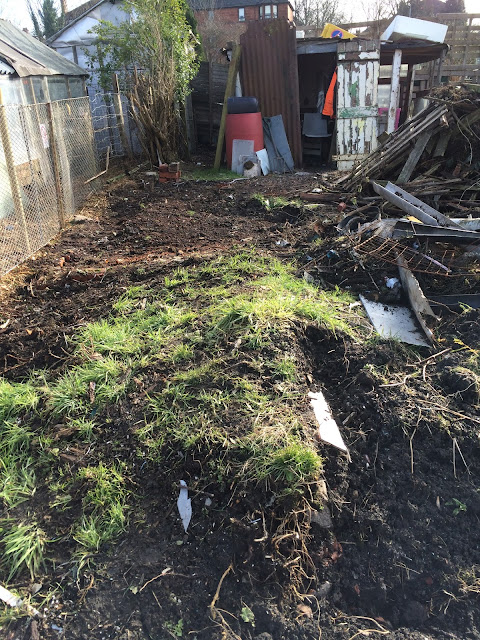 I mentioned to The Neighbour a couple of weeks ago the disgraceful nature of our mutual boundary, my former midden area, his greenhouse/potting shed. I only mentioned it because I'd have to go onto his allotment to get it clear and tidy, but, Gawd-bless-'im! he went ahead and tidied it all up and even put a nice new few fence in.You can see it there on the upper left of the photo. On the right is the increasingly big pile of rotten wood from the shed and the midden. I'm waiting for the rain to get it burnt. Also on the right is scrap iron and other rubbish for the skip.

I'm blogging the rather tedious subject of a midden because I'm inordinately pleased to be getting this area cleaned up with a view to it being cultivable by the end of this growing season. The area in the middle of the photo is a thin layer of earth covering one or two courses of bricks, which themselves cover some very stony ground. The bricks I'll make into paths. The earth beneath is going to need an awful lot of riddling and oomska.

That grassy mound dominating the photo, I shudder to think what midden-related horrors lie beneath it. On its right hand side is the eastern wall in the Old Greenhouse Foundations.

None of this has priority, but there are only so many blog posts one can write about the (increasingly tedious) task of leveling going on at the other end of the allotment. That should be finished this week.

The horseshoe: I found it raking rubbish from the midden, and immediately nailed it to the shed door for luck.