The Miracle of Mushrooms : Healing of Gaia 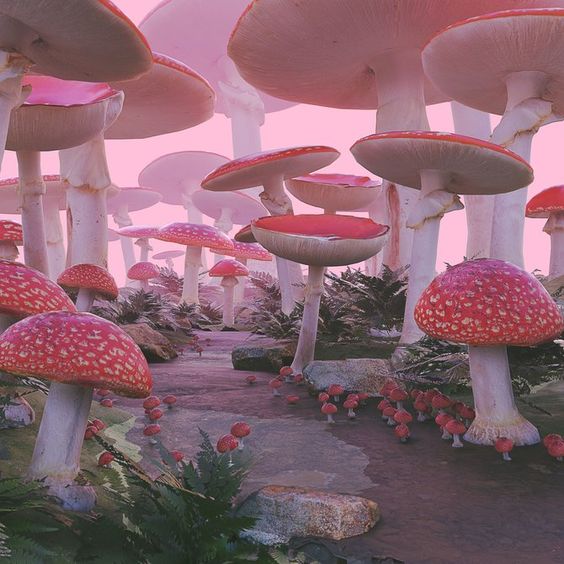 Mushrooms are a form of intelligence unlike anything we know of on this Planet. The mycelium network helps communication or transmission of information between trees, the soil and all who ingest these miraculous mushrooms that envelope the entire planet. Many who have ingested the Psilocybin Mushrooms have reported experiencing clairaudience or telepathy of some kind, clairvoyance and other abilities that are usually considered superhuman or mystical in nature as they are not easily understood within the scientific and rational paradigm that governs most of our intellectual understanding of the Universe.

We've all seen the 'Amanita Muscaria' toad stool mushrooms while growing up in cartoons, comic books, artwork etc., mostly associated with the so called mythical creatures of ancient folklore such as Elves and Fairies. I remember wearing a woolen sweater with the Amanita Muscaria stitched on it when I was very young. The white spots on the red caps all seemed very familiar even then in a strange and magnetic way.


Some interesting videos on Mushrooms and the Mycelium Network !

After dabbling with Cannabis and psychedelics such as LSD and MDMA, I came across Mushrooms first in tons of visionary artwork on the Internet. Mushrooms always made me curious to look deeper into the magical world of fungi and the benefits of using these to attain spiritual insight into ourselves and the world we live in. My first experience with Mushrooms was in Kodaikanal where the Psilocybin Mushrooms grow wild. Some have also reported seeing the Blue Meanies or the Blue Amanita Muscarias growing wild in these parts. However, not very common to find those as compared to stumbling upon the Golden caps mushrooming all across the forest floor in the Nilgiris. 'Nilgiris' literally translates, the 'Blue Mountains' ! :)

The effect was mild compared to my previous psychedelic journeys on other tryptamines, however it was very pure and organic in its feel. It was very grounding and pleasant as I felt more connected with everything around me and at completely at peace. This was an initiation for me into the world of shrooms and was as gentle as it gets. My next adventure on shrooms was unlike anything else I have experienced before. I did about half a dozen of the golden caps if i remember correctly :) ... and then began the roller coaster ride which was like sailing on the edge of lucid dreaming and wakefulness. Going in and out of visions I couldn't make complete sense of ... it was more like watching Mickey Mouse or something in animation with your eyes closed. After a while when I opened my eyes and tried to 'get back to normal' by doing the usual ... streaming music on YouTube while rolling some nice Mango Sativa bud. Couldn't keep my eyes open for too long though ... and as I closed my eyes ... a vision came to me of someone I was supposed to meet in the next couple of hours. However, in the vision I saw this lady say 'Police Police' in her odd russian accent. I wondered why I was seeing her say Police Police ... perhaps I would be cracking a joke or two about her accent to my friends later ... and I let the thought/vision slide not paying much attention to it. Couple of hours later as I was meeting this lady, I had a brief encounter with some plain clothes policemen who jumped us while we were talking somewhere outside, assuming something odd was happening between us since they saw me handing over some cash to her. HAHAHAHA :D Anyway, I got out of the situation without much trouble (they found some Cannabis on me after I gave them permission to search me) since I happen to know some influential people around here and perhaps the shrooms helped me stay calm and composed through the experience. I was shaken up a bit after this experience and kept wondering why I didn't pay attention to the vision I had. Perhaps, it was my first lesson in clairvoyance and knowing that it's possible to know more than what's here and now if one is tranquil and at peace. We become open channels when we are completely and totally silent ... devoid of all that mental chatter that takes away most of our time and energy.

Mushrooms have a way to find you when you're ready like most things in life. There are no accidents and no random occurrences. The shrooms lead us on our path and help us connect with other like minded souls on their journeys as we usher in a new age of light on Earth. We are being given these powerful medicines so we can attain deeper insight into ourselves and become conscious co-creators of the new paradigm. The more I learn about Mushrooms the more mesmerised I feel about them and the possibilities they hold in changing humanity from our destructive ways by healing and nurturing us. Recently while I was watching Dr. Klinghardt's video about EMF radiation and its effects on Human health ... I came across something he mentions about eating Mushrooms that grow around these towers or radiated areas. These mushrooms build our immunity against harmful effects of radiation. I was amazed at the timing of the message reaching me ... :) while cooking some delicious Oyster Mushrooms ! I've been using Oyster and Shiitake mushrooms lately and they're so so yummy, if you haven't tried cooking them as yet, you must ! There are still some more shrooms I'd love to try like Lion's Mane, Chaga, Reishi ... all of these are known to have healing benefits with prominent antiviral properties ! More reason for us to move to Shrooms for food and for our vision quests. I believe we are being given these medicines in these times so we can build our immunity against all attacks of any kind whether its radiation sickness or a viral surge. Mushrooms are here to heal us and awaken us to our true nature by enhancing our connection with everything around us, making us more sensitive and more responsible gardeners of our home, Gaia.

Hope you liked the videos and other information shared in this post. Please share it with your community of friends and help us get the word out !

The Miracle of Mushrooms : Healing of Gaia