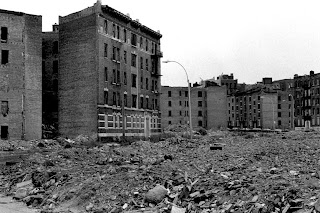 Thinking it was some ass-wipe from the party who locked himself out, I woke my Mr. August and asked him to handle the situation. I was too afraid of all the cruel things I would say. In my foggy fright I forgot what a thundercloud he can be. He picked up the intercom receiver and quickly got to the point: “Who’s the stupid asshole ringing my bell at this hour?” It was like listening to German hip-hop. A long pause followed and then he said: “No, I’m not letting you in. Why not ring the jerk-off spy who phoned you. Goodnight.”

As I lay with the darkness, listening to the muffled sounds of Britney Spears, (the only reason I didn’t entirely mind the cops’ invasion) my husband was already fast asleep. I wondered what I had done to contribute to his hardened aspect. Between my confrontations with xenophobia and his love for Fassbinder, (the only German director who criticised post-war Germany) my Mr. A. had no more patience for Germans. He could hardly tolerate his brother for being “too German” which in translation means, inflexible. I wanted a Cigarette to help me think how to make things right.

I remembered a conversation I had with my English bookseller. He asked me how much longer did I plan on staying in Berlin. Without thinking, I said: I’m not leaving this city until I come to terms with it, and that means having to accept certain disagreeable sensibilities. His chiselled British Face looked at me and smiled. Having lived in Berlin longer, he knew exactly what I meant.

Mentally smoking a cigarette and travelling back in time, I noticed how my thoughts kept stopping at certain incidents. I tried connecting the incidents and eventually saw how they had one thing in common: injustice.

By this time, the eye of first-light blazed the sky. The deep, rhythmic breathing of two dogs and a husband made me sleepy. I shut my eyes and told myself, regardless of what’s happened I have fought to never be victim to those circumstances. Nor will I ever allow anyone’s way of thinking harden me, for nothing touches me more than a face that is open to life. And that is always what I wish to be: honest & open, without walls or bitterness.

*Photograph from Mel Rosenthal’s In The South Bronx of America. The view is almost identical to the one I remember from my childhood bedroom.

*Forgive me, dear Readers, for mentioning all this dread again. I never discuss it with anyone. If it creeps into my posts, it's unintentional.


This post first appeared on The Grey Notebooks, please read the originial post: here
People also like
Importance of SEO to SC Businesses
how to improve vision in 7 days
How To Meditate: A Complete Guide to Mindfulness & Better Sleep
7 Homemade Christmas Gift Ideas They’ll Love
Sure, you can buy Bitcoin on the Cash App run by Square. But what if you could…
Dacryphilia: The things you need to know right now
Karen S. Wiesner, Tension and Twists, Part 3 (Writer's Craft Article)
Top 10 trends in 2021 for jewellery in Australia