Putting words to music is something I’ve done for most of my life. Even before I learned to play the Guitar, I made up ditties to familiar tunes. I had Old McDonald doing things that had nothing to do with animal husbandry. Looking back, I’m sure they were lame, but now and then I’d have one so funny my friends would snort Grapico out their noses. I lived for those gems. I knew then that songwriting was in my blood.

One summer Saturday my friend Donnie Pinion asked if I’d like to go camping down on the backwater down below Dora. The backwater is a natural lake that flows into the Black Warrior River.

Never passing up an opportunity to spend time near the water, I agreed. We took my dad’s old pickup. I wasn’t old enough to have a license then, but my folks let me drive the pickup as long as I stayed on the backroads.

By the time I picked up Donnie, I had several other guys that wanted to go too, so they rode in the bed of the truck. Donnie tossed in his pack, his fishing gear, and an old guitar. The old ax looked as though it had seen it’s better days, but when he pressed the strings hard enough, it sounded pretty good.

We fished until dark before building a campfire. It was then that Donnie took his guitar and started to play. After a few songs, he asked if I wanted to give it a try.  The neck of the guitar felt awkward in my hand. The strings left indentions in my fingers when I tried making the chords, but I liked the buzzing I heard.

The first song he taught me to play was "Green Green Grass of Home" sung by Porter Wagner. After a few hours of instruction, I was able to stumble my way through the song.

When I got home, I borrowed an old Silvertone guitar from my cousin Mickey and practiced until my fingers bled. The Porter Wagoner hit had been one of my mother’s favorite songs. I played the tune so many times that afterward, she’d punch the station button on the car radio whenever the song came on.

I learned three chords, and with those, I could play any country song written.

It was only a matter of time before I started Writing Songs of my own. They were sappy songs about dogs, hunting, and fishing which were the important things in my life at that time. Thankfully, none of those early songs survived.

But here’s the thing – the more you practice, the better you get. The same was true for songwriting. Fortunately, I married someone who loves music and writing songs as much as I do.

This past weekend, we invited one of our songwriting buddies over to write a new song. Joe Greg Winsett showed up at 2 p.m., and we began writing an idea I’d been kicking around.  For the next two hours we wrote and laughed, but the words flowed.  We haven’t had that much fun in a long time. The title of the song was, "Coffee."

Joe Greg will join Jilda and me along with Joe’s friend Dave on the patio at Lavish Coffee in Jasper on June 15 at 7 p.m. if you’d like to come by and hear the new tune. 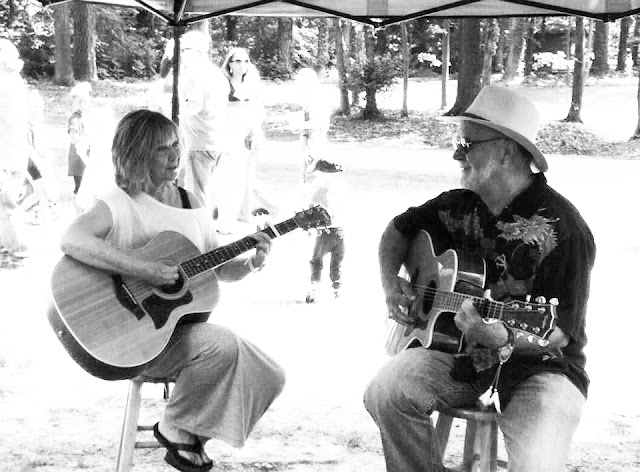