Repost: Ronghiya and the port of last resort

I never do reposts. Never ever done. But this is one of the very rare times I'm gonna make an exception. For some reason, the magic is there, in the author's verses. I fought hard to hold back my tears as I read through the article while waiting for our car to be fixed in a "talyer" filled with other customers and the mechanics.

5 things to look for when shopping fo…
Understanding DACA & the Role Social …
Discover the Magic of Venice in Novem…
Canadian Online Casinos at its Best
Karen Wiesner: The Stories Behind Cla…
Inspite of the distracting environment, the article did make an impact. Here I am sharing it to everyone visiting my site. This article is from Rappler, no plagiarizing intended, just real admiration for the author. Here's the link of the original:
http://www.rappler.com/thought-leaders/94664-rohingya-boat-people-philippines

The Rohingya and the port of last resort

We know our place in the world. We are the port of last resort, and have little to offer the Rohingya beyond a separate peace. Yet I write this with pride, in the hope that there will always be a cluster of islands southwest of the Pacific, where no ship in need is called unwanted 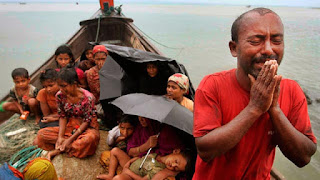 Repost: Ronghiya and the port of last resort