The Mirror of Personal Semantics 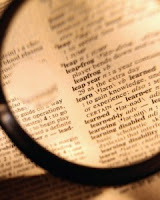 There are words I have started to avoid. They are words I have come to think of in an entirely different way than I did for much of my life. Maybe it’s simply my maturity, or maybe it is cultural influences. I’m not sure.

The other day I was reminded of one of these words when I was catching up on news and wasting time on Facebook. It was the day that Prop 8 was ruled against in court in California, and the posts hitting Facebook all that day were a mixture of elation and disgust, with a majority of them crossing my page in favor of the court’s ruling. In some of the celebratory postings and comments, I was beginning to see the word “tolerance” surface frequently, and I began to think of that word and the context in which it was being used. Although those using the word meant something positive, I began to wonder if it were really true to be doing so and what it meant about us when we did.

When I tolerate something, it usually means it is something I may not like or agree with, but that I am willing to live with, or ignore, or dismiss as something too trivial with which to bother myself. It means I see my position or status as preferable, and that I see the other position in a negative manner, or maybe slightly above the mark of acceptable.

I’m not sure it applies here. In fact, I think it marginalizes someone in this case, only because they were born with a sexual preference different than mine. And different is not necessarily properly placed when we see it as a negative.

But “tolerance,” and “acceptance” are two words—the latter only slightly less potentially offending than the former—that are among those I feel are somewhat judgmental and that I try to avoid using. I’ve come to dislike them. I see them as condescending, and I know I have a history of using them before I came to feel about them as I do now. I dislike that I used to include them in my vocabulary, and I feel better knowing that my feelings about them, something as simple as those words, helps keep me a little more humble.

The extreme of this, or at least what I see as the extreme, is when I hear someone define themselves or someone else as either “straight” or “gay.” If you think about it, we apply a great deal of positive inference in the word “straight.” We think of it as true, as correct, as morally upstanding, and the best path from point A to point B. The opposite of “straight” is “crooked. Just about everything we think of as not being straight we think of as being wrong, or possibly not the norm.

I don’t think I like this word either, this word “straight.”

I posted something on Facebook that day that stated my dislike of the word “tolerance,” and I was a little surprised by the discussion it prompted. It eventually led to a debate about the use of certain words that many use in the positive, but that might mean something much different than what we intend when we use them in reference to someone else, or our relationship with someone else. Eventually we hit on a word that I have come to dislike for a long time now, that being the word “sympathy.”

Most of us see sympathy as a positive trait in ourselves. We see it as an ability to feel for someone else who is either struggling, or disadvantaged, or suffering in some manner. When we believe we feel sympathy for someone else, we feel we are being compassionate and understanding, and that we care about that other person.

But are we, really? Could it be that when I feel sympathy for someone I am not really feeling compassion, but instead feeling something entirely different, something that might even be considered selfish. If I feel sorry for someone, am I really wishing they were in a better state, or am I only affirming my own as the one I see as preferable?

Oddly enough, this is a word I came to feel differently about when I was a younger man, before I thought myself capable of such contemplation. At the emboldened age of 19, when young men tend to think themselves both invulnerable and wiser than their years, I set aside college and went to work for a railroad contractor. It may not have been the best long term strategy, as far as career decisions go, but it proved to be a springboard into my management career, and an experience that would serve me a lifetime.

I spent the next eleven years—including all of my twenties—roaming the continent, and getting paid for it. Much of my travel was through rural areas, and the largest portion of it spent in the deep south, where I often thought of myself as far out of my element. I had a dim view of the people of the rural south, because I saw them as people trapped in a way of life that was uneducated and apathetic. I felt sorry for them. From my perspective as a suburban-raised, modern, and “enlightened” boy, I thought their lives both difficult and backwards. I wondered how they could enjoy their lives, and why they never chose to leave them or do better for themselves. I defined their lives by the four-wheelers I saw parked on their front lawns, and, by their manner of speech. At times, I mocked them.

And then, I met O.D., a man assigned by the railroad to work with me for an entire week. O.D. was a big man, the epitome of a rough and tumble railroader who had worked the rails all of his life. He was adept at every nuance of the communication and cooperation necessary to expedite my work, and he was respected widely by peers and supervisors. He had an affable air about him and an infectious laugh, which was easily stirred even though he seemed a serious man as he went about his tasks. I grew to like O.D the first day we worked together, because he was candid, not self-conscious, and a little rough around the edges. He made me comfortable. We began to click, and the work flew past us.

On the third day of working together O.D. had me pull off the rails in a small town just north of the next major rail yard, deep in the heart of Arkansas. It would be a stretch to try and make it all the way in before the dark and other rail traffic caught up to us. I raised my gear and pulled on to the road at the crossing, and looked at O.D. from across the cab to ask him which way I should head to find a motel.

“We’re not staying in a motel tonight,” he said. “That right there’s my house.”

The house that O.D. was pointing at was a somewhat-kept, brick ranch not more than 50 yards from the tracks, with a beat up and muddied Chevy 4-wheel drive parked in a driveway hard to pick out in the sparse lawn. It was one of only about a dozen homes that were clustered in between an expanse of rice fields and the railroad. On the front lawn was also parked—you guessed it—two equally muddied four-wheelers. I felt immediate dread, and desperately reached for excuses to not stay with him and his family, all of which failed. O.D. was having nothing of me driving to a motel, and if I could even manage to convince him I should, he was not about to let me do so on an empty stomach.

O.D.’s wife met us in the drive. She was a pretty, petite woman, who seemed dwarfed by O.D.’s heft as he enveloped her in a bear hug that lifted her off her feet. She laughed as he did. She seemed a little embarrassed by his affectionate exhibition in front of a stranger.

“This must be Co-o-ody,” she said, in a syrup-thick drawl, and she extended a hand to me to shake. Her smile was warm. “Supper’s ready, come on in.”

What followed dinner that evening, and for the next three days I was rained out of working, was an education about people who live differently than I do, and an education about myself. Because of the kindness of O.D. and his family, I came to understand that my sympathy for people in their lifestyles was misplaced, and I felt humbled to understand I had ever thought less of them. These people loved life, and loved their lifestyle, no less than I did. In fact, I felt ashamed of how they could be so kind to me, when I had previously thought so little of them without really knowing them. I came to care deeply for them, and I stopped in and stayed with them every time I was in the area over the years. Without fail, they always welcomed me, and they treated me as family.

Because of O.D. and his family, I came to dislike the word, this word “sympathy.”

And I came to distrust and examine other things and people I had long held thoughts and opinions about, including words I often used to define or describe them. Over the following years, and through my life’s experiences, I would hold these words and my beliefs up in the mirror and ask myself if they pass the test that earns them the meanings I assign them, and what might I learn about myself in my examination of them? Do I carry nuances of bigotry, or judgment, in what I say, even when I mean the best with what I say? And if I do, how do I go about eliminating those shadowy errors, and say what I really intend? How do I act and reflect the best of someone else, without posturing, or without minimizing or marginalizing someone else?

I haven’t entirely figured that out yet, because I know that not only my vocabulary is loaded with things like that, but that my actions and deeds are as well. Actions and deeds are habits more deeply entrenched and rooted in our psyches than any words. I, like many people my age, have lived through ages that have seen rapid cultural changes on many fronts, and in our struggle to accept and live with those changes, we’ve had to go through the process of unlearning what we’ve often been taught and had reinforced. Our families may have engrained things in us that we later decide are wrong, or learn are wrong through changes in our lives, and changes in ourselves. Sometimes we even have to do so reluctantly, because we have to reconcile what we’ve known with the cultural changes going on around us. Sometimes we have to adapt, or we suffer for it in some way, or unwittingly lessen our quality of life by remaining steadfast in our outdated and erroneous beliefs.

Either that…or we tolerate it.

© 2012 Cody Kilgore. All Rights Reserved worldwide under the Berne Convention. May not be copied or distributed without prior written permission.

The Mirror of Personal Semantics