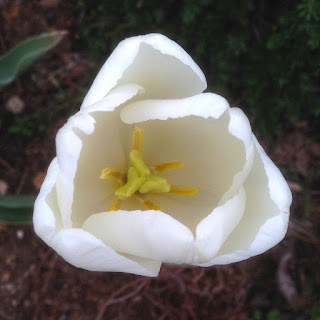 I increased Dot's pain medication today. Actually, I'm only giving her the dosage the vet recommended, but it's still more than she was getting yesterday. Did the extra meds help? It's hard to tell. Dot slept well during her morning nap and actually did seem more active and engaged in the afternoon. She appeared tired on her afternoon walk though. It could have been the humidity, or maybe the pills are doing nothing at all. It sure would be easier if I could just ask Dot how she was feeling. If my own doctors prescribed pain medication the way vets do, lord knows what I'd be taking now. The doc would probably just twist my bad shoulder and when I screamed, he'd prescribe something for pain. I'm not a big fan of pain medication. A lot of it is addictive. For the most part, I've just learned how to compensate.

So, what do you do with a dog? A mild amount of discomfort will keep an injured dog from doing something stupid and injuring themselves further. Mild discomfort is kind of a reality check. Severe pain is something else entirely. Since cancer can cause severe pain, I rely on what the oncologist tells me when I take Dot for her periodic evaluations. We always run some tests to determine whether things are getting better or worse. I try to notice subtle changes too. Changes in behavior do mean something. Dot is definitely more uncomfortable than she was a year ago. She still seems happy though and rests easily without a lot of panting or muscle tenseness. I want Dot to be as happy and comfortable as possible as she completes her journey. It's hard to hit the sweet spot though. Too little medication leaves you in pain and too much turns you into a zombie.

I must really be bored. I spent an inordinate amount of time this afternoon looking for someplace new to have breakfast. I extended the radius I was willing to travel from five miles to ten miles and several new options turned up. Everybody basically offers the same thing on their breakfast menu, but the quality and price vary wildly. Who would have thought that there were so many variations on pancakes, bacon and eggs, migas, eggs benedict, breakfast tacos, and waffles. Yelp reviews aren't very much help. Some people actually seem to like crappy food. I found a place in Lakewood that sounded interesting and another in the lower Greenville area. Both are a little further than I usually travel, but what better have I got to do in the morning anyway?

Don't let me start talking about politics. Ever. Political discussion seems to be a virus that has infected most of my Facebook friends. I've never seen anything like it. The weird thing is that everyone is just preaching to the choir. I can't think of a single person I know that has actually changed someone's mind. If I did talk about politics, I'd probably just become a purveyor of fake news. It's almost too easy to rile someone up with fake news. Everyone is so locked into their preconceived view of the world that they'll latch on to anything that reinforces their beliefs. I feel like throwing a bucket of cold water over some of my friends. Good grief. The world isn't coming to an end and I doubt that we are on the verge of a new renaissance either. Ten years from now, you'll look back and wonder what all the commotion was about.

I just hope I'm still around ten years from now. People in my age range are dropping like flies. Almost every week I read about someone I know who has passed away or is fighting a losing battle with cancer. Not everyone is Betty White and quite a few folks never make it to 80. There's not much I can do to change the odds. If having a Dalmatian keeps you young, I'll live forever. If you need close friendships and a sense of community to keep you going, I'm probably a goner.