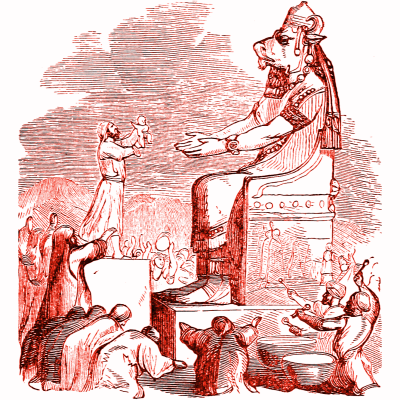 The Bible records that the ancient Israelites would sometimes turn away from their God and engage in various forms of idolatry. One particular foreign deity which held a special fascination for the Israelites was an Ammonite fire god whose name was variously rendered as Milcum, Molech or Moloch. Devotees of this god would sacrifice their children by fire to gain his approval. Through various prophets, God warned the Israelites not to "cause their sons and their daughters to pass through the fire unto Moloch," but many parents ignored the warning and performed this "abomination" anyway. It's hard to know what to make of this behavior; after all, what kind of parent would willingly sacrifice his or her child to a false god?

We'll get back to that later.

When I was a tween -- back in the era before the word "tween" had been invented -- I wanted to be a child actress. And frankly, I would have done pretty well on stage or in the movies. I was cute back then, short for my age, with expressive eyes and elflike features. I had a clear speaking voice, sang in tune, read well and could memorize long swaths of text easily. And I had a good understanding of how to interpret text effectively, especially for someone my age. When tryouts for the first movie-musical version of Annie came around, I was desperate to audition. I just knew I'd make a great Annie. But for reasons I didn't understand at the time, my parents wouldn't take me to the auditions. All I remember getting out of them by way of explanation was that they didn't think it would be good for me.

It took the better part of two decades for me to understand why my parents were so cautious about letting me audition for that movie. It wasn't because they didn't think I would do well -- indeed, years later my mom admitted that I was a talented little actress. But that was exactly why she didn't want me to audition. My mom was wise enough to see a few other things about me -- that I was an attractive, charismatic, sensitive, emotional child who had been taught to respect and obey adults. And she felt that such a child should be kept as far away from Hollywood as possible.

Now why would she think that?

Well, if you've been paying attention since the earliest days of the movies (and well before that, in vaudeville and other theater), it shouldn't be all that surprising. Consider this incident related by Shirley Temple, the most famous child actress of the 1930s: "One famous movie executive who shall remain nameless exposed himself to me in his office. 'Mr. X,' I said, 'I thought you were a producer, not an exhibitor.'" She couldn't have been older than her early twenties when this happened. Consider also Ron Howard, now a director and producer, who started out as child actor Ronny Howard in the late '50s and early '60s. If you go to the IMDb and track Ron's early TV show and movie appearances, you will see another name frequently popping up alongside his, quite often in an uncredited role: Rance Howard, his father. The elder Howard, an actor in his own right, did his best to protect his son by making sure he was part of the cast or crew in productions where Ron appeared.

And think of all those talented former child actors and actresses who have become walking train wrecks as adults: Lindsay Lohan, Miley Cyrus, Edward Furlong, Macaulay Culkin, Amanda Bynes, etc., etc., etc. -- or worse, all the former child actors who died of drug overdoses or committed suicide. Even those who make a successful transition to adult acting often go through a terrible patch to get there; Drew Barrymore admits she was a hard drinker and drug abuser who first entered rehab at age fourteen. (You don't have to take my word for any of this; Mara Wilson has written a bang-up article all about why former child stars go crazy on Cracked.)

I've been thinking about this subject a lot recently, as people like Bill Cosby and Harvey Weinstein and Roy Price enter the news cycle for the most notorious of reasons. Actors and other creatives are finally speaking out about a once-taboo subject: that the "casting couch" method of finding new actors is alive and thriving in the entertainment industry. And if you think the sexual predators hiding in the tall grass of Hollywood only prey on attractive, naïve adults, you've got another think coming.

Children who are the way I once was, with ambitions to act in films, don't know about any of the dangers of the Hollywood machine. They just want to be in movies. Such children, whether they know it or not, need wise, thoughtful parents who keep them as far away from predatory adults as possible. Just as parents are told to watch over their children in amusement parks because such places draw in pedophiles, parents whose children have Hollywood ambitions should be warned that no child should ever be left alone with an older actor, director or producer. It isn't safe. And no matter how famous your child becomes or how much money that child makes, it will never be enough to pay for the damage of having been fed headfirst into the Hollywood-chipper.

So, again: what kind of parent would willingly sacrifice his or her child to a false god?