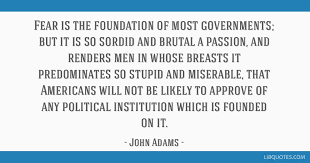 Most of us think of 2020 was a horrible year, and rightly so.  But for me," horrible" isn't a specific enough description of what's taken place.  "Sordid" may mean dirty or filthy, but also ignoble, vile, base, tawdry, squalid.  That seems, to me, to be a more accurate characterization of the Conduct of people displayed this year, and conduct concerns me more even than events, man being the measure of all things, and our conduct being an indication of what events will be to the extent they're within our control.

How Do You Get Bed Bugs?
8 Points to Consider When Trading Bi…
The Punisher: A Timeless Character
Langa Mavuso – Sunday Blues
Don’t Forget to Brush Your Fur
Sordid, indeed.  How else describe the cornucopia of misconduct we witnessed last year?  The defense, indeed celebration, of corruption during the impeachment proceedings; the remarkable parade of frivolous claims made by persons calling themselves lawyers, all to serve an effort to undermine the recent election and keep in place a far less than able and extraordinarily ignorant man, concerned only with himself, his family and cronies; the craven posturing of spineless sycophants infesting the Congress of our Great Nation?   Ignoble, sleazy, vile, foul, tawdry; all those characteristics and more combined in a single, all-encompassing word.
It's our Politics that most concern me.  The judiciary, though now loaded with conservatives thanks to a man and a seemingly unthinking band of brown-nosed minions with little regard for the law, shows signs of being true to the law by almost universally rejecting the incomprehensibly unfounded claims made against the validity of the election.  This indicates the courts still have some understanding and respect for the rules of evidence.  That is a good thing.
But it seems that outside of courtrooms, many of the people of our Glorious (and for the time being in any case) Republic don't know what evidence is, even outside of the law, or if they do aren't inclined to require it or are content to ignore it.
And so I wonder whether John Adams was correct in writing what appears at the beginning of this post, or if he was correct when writing it whether what he wrote has any truth now.  What he says about fear, that it is a sordid and brutal passion and renders those possessed by it stupid and miserable, is undoubtedly true. But what he says about the likelihood of Americans accepting any government based on it seems very optimistic.  Fear has been evoked in our politics for a long time, but never so much as now, and might even be said to be welcome not only to many of our leaders but many others who thrive on it.
Should we celebrate the end of 2020, that sordid year?  The new year has barely begun and we have members of the House and Senate gibbering that the election was invalid and quite prepared to devote the time of government in an effort to perpetuate a fraud while condemning what, if they have even the most simple intelligence, they must know was not one.  I think I've quoted Disraeli's comment that there is no honor in politics in the past, but in his time there were still one or two and possibly even more honorable men.  There are no men of honor now, at least in what we rather fatuously call "high places."
Unfortunately, it seems chances are good that the sleazy and ugly nature of our politics which was so much on display in the last year will continue, and that we'll continue to be stupid and miserable, John Adams notwithstanding.