The Diocese, the Synagogue, the Governor and the Supremes 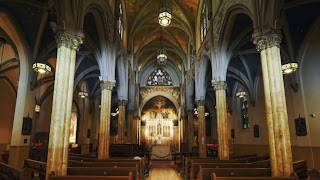 Much is being made of the Supreme Court's recent decision regarding the State of New York's restriction on attendance at religious services.  I wonder whether that "much" may have something to do with the hyperbolic statements Justice Alito, apparently in a very ideological--or should I say righteous?--mood, made before the Federalist Society.  Those concerned with the possibility of a new conservative majority of the Supremes further broadening the scope of the Establishment Clause may have cause for their concern given Alito's unqualified expression of his fears of government regulation.  But it seems to me this decision is fairly narrow.  It's the fact that there seems to have been no need for the decision to be made that's worthy of note.

The decision doesn't prohibit Restrictions on the number of attendees at religious services during the pandemic.  Roughly speaking, it merely provides that the restrictions imposed in this case aren't adequately justified in the law given that restrictions on secular uses are not as stringent.  Such restrictions are subject to strict scrutiny; there must be a compelling reason for their imposition.  According to a majority of the Supremes, there was no such compelling reason.  There is nothing establishing that attendance at religious services is more likely to cause the spread of COVID than attendance at a liquor store or grocery or any of the kinds of secular uses that are less strictly restricted.

It's difficult to be outraged by this.  What is odd, however, is that Injunctive Relief was sought from the Court during the pendency of an appeal to a Federal Circuit Court, and the restrictions which were imposed are no longer imposed.  Typically, injunctive relief isn't available in the absence of the high probability if not certainty the applicant will suffer irreparable harm if it isn't granted.  Assuming that the inability of a person to attend a religious service will cause irreparable harm, if the restriction claimed unconstitutional is not being imposed, it isn't at all clear that irreparable harm of the kind claimed to exist will actually take place.

This is one of the points made by those Justices dissenting.  They note that if the restrictions are imposed once more, application for injunctive relief may be made at that time.  The majority, however, maintains, for reasons which don't seem to be given, that there is a constant threat they will be imposed and so injunctive relief is needed.  The majority appears to lower the burden imposed on those seeking the extraordinary relief of injunction considerably if what may possibly take place is sufficient grounds for issuance of an injunction.

It would be a matter of concern if that's what intended by the decision, or if that is how it will be construed in the future.  Then protection would arguably be available to anyone who thinks that freedom to worship may be restricted whenever a government may potentially restrict it and has the power to do so.  That would make the prohibition under the Constitution absolute, or provide an opportunity for the imposition of a uniform rule by which restrictions may be judged, instead of the case-by-case approach which has been wisely used in the past.

It occurs to me that activist judges may be conservatives as well as liberals.  An activist is an absolutist, and absolutists aren't thoughtful, careful thinkers--or jurists.

The Diocese, the Synagogue, the Governor and the Supremes