As a non-historian, I come to understand the past fairly late in any cycle of commemoration. My school English teacher wrote a well-regarded book about the Somme and we had a signed copy at home, but I've never read it. Philip Orr is a member of the History Hub Ulster's advisory panel. 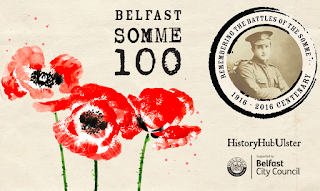 Belfast Somme 100 is their programme of events and projects - funded by Belfast City Council - marking the centenary of the battles of the Somme, exploring the place of the Somme campaign within the First World War and its place within the social and political history of Northern Ireland and pre-partition Ireland.

The Cenotaph at Belfast City Hall will be the venue for the annual wreath laying ceremony at 11am on Friday 1 July, remembering the men of the 36th (Ulster) Division and the 16th (Irish) Division who lost their lives. 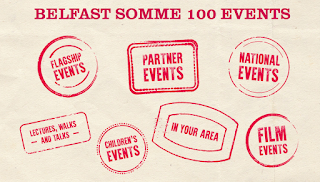 Already there have been concerts, walks and talks. And between now and November, there will be exhibitions, lectures, conferences and films across north, south, east and west Belfast. Keep an eye on the website for details of the kids programme planned for Saturdays in July and August.

Monday 4 July at 6.30pm / Training Kitchener’s New Army in Ireland – What Can Archaeology Reveal? is a lecture by Heather Montgomery in Belfast Central Library / Free to register

Tuesday 5 July at 12.30pm / 1916 Walking Tour of Belfast Merchant Companies led by Nigel Henderson, starting at the front gates of Belfast City Hall and focussing on the Somme stories of the sons and daughters of some of Belfast’s most famous merchant families. / Free to register

Lots of partners are running events too ...

Between Tuesday 5 to Saturday 16 / Frank McGuinness' play Observe the Sons of Ulster Marching Towards the Somme will be performed in the Lyric Theatre.

Between 3 and 14 August, Féile an Phobail will host a series of talks around the Battle of the Somme anniversary.

Until 19 December, an exhibition highlighting the contribution of Orangemen at the Battle of the Somme - The Lily and the Poppy - is running in the Museum of Orange Heritage in Schomberg House.