My mother's death in 2004 of ovarian Cancer still seems like yesterday - when it doesn't seem like a lifetime ago. 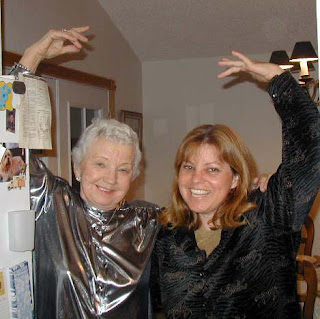 A few months after after mom died, I talked to her oncologist about a recently discovered gene mutation, BRCA, that had been linked to both ovarian and breast cancer. Is there any chance Mom had that gene mutation, I wondered. He assured me that only 3 to 5% of all patients with ovarian cancer have the BRCA1 or BRCA2 gene mutation, so chances were good that Mom didn't have it. He encouraged me to relax and go about my life, but also said it wouldn't be a bad idea to have a genetic test at some point. The price tag of that test back then was over $6000, and insurance wouldn't cover it.

In 1991, many years before Mom died, when the twins were toddlers, Peter was in pre-school, and Elisabeth was in 1st grade, I had a hysterectomy due to severe uterine fibroids (and Mom flew to San Diego for a month to help me out, as she always did when I needed her).

Before the surgery, I remember crossing off the line on the consent form that stated that this would be a "total hysterectomy," meaning that my ovaries would be removed (called an "ooperectomy"), in addition to my uterus. That would throw me into immediate menopause. I was only 36. No way were they gonna take my ovaries if they weren't diseased! So I crossed out that line and told them to wake me up if my ovaries look like a problem and "we'll talk," but they were not to perform an oopherectomy without waking me first. I wasn't woken and my ovaries weren't taken.

Until 2014, when I was through menopause and decided that my ovaries had served me well, but I didn't need them anymore - especially considering Mom's death ten years earlier from ovarian cancer. I was still curious about the BRCA question, but had taken Mom's doctor's advice and not worried much about the possibility that Mom, and possibly I, had the gene mutation. Although genetic testing had become more common and presumably cheaper, my insurance still wouldn't cover it in 2014. It would, however, cover an oopherectomy - so that's what I did.

So my uterus was removed in 1991 and my ovaries were removed in 2014. But when were my Fallopian tubes removed? Why is this important, you ask? Because recent research shows pretty conclusively that ovarian cancer actually begins in the tubes, and that having them removed (called a "salpingectomy") is protective against ovarian cancer AND against breast cancer.

But I'm ahead of myself.

Just before Christmas last year, Kat had the opportunity to have genetic testing through a program at UCSF. She was surprised to learn that she has an ATM Gene Mutation which, like the BRCA gene mutation, is associated with higher risk of breast and ovarian cancers, as well as prostate and pancreatic cancers. The risk isn't as high as with the BRCA gene, but it is still worrisome and now Kat, who's only 30, must stay especially vigilant with screening measures. She wondered who she got this ATM mutation from, so asked Tom and me to be tested through Color Genomics. Amazingly, the test was only $50 for first degree relatives of those with a mutation ($300 otherwise - still a bargain compared to $6000!).

Instead of getting my results online, I received an email, asking me to make an appointment to speak with a Color Genetic Counselor. Guess that ATM mutation must have come from me, I thought. Imagine my surprise when, while on the phone with the counselor, I saw this: 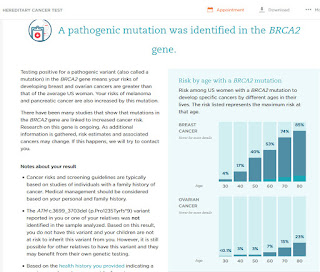 All this time, I had the BRCA gene mutation after all, and didn't know it!

The counselor told me that the chance of someone with the BRCA2 mutation getting breast cancer by the time she's 70 is a whopping 74%. "I'm 63; does this mean that chances are 74% that I'll develop breast cancer in the next seven years?" I asked him. No, he assured me, the chance decreases from that number each year that you're NOT diagnosed with cancer. But yes, my chances are pretty dang high.

And that calculator doesn't add my 26% Ashkenazi Jewish heritage from my dad's side, which puts me at additional risk.

I'd just had my yearly mammogram the week before I received this news. It was clear. So that's good. But SHIT! Really? Haven't we had ENOUGH cancer in our family recently?

The counselor noticed from information I'd provided previously that my ovaries had already been removed. As an oopherectomy is recommended for all women with a BRCA gene mutation, I was ahead of the game. "But," he said, "You might want to consider a prophylactic mastectomy. And you'll also want to get a breast MRI, just to confirm the findings of your recent mammogram." I did that last week (such fun... not!) and thank goodness, it was clear, too. So I do not have breast cancer... at this point. And for now, at least, I can postpone a mastectomy until at least next Fall.

Stanford has a great tool which can be used to predict the chances of getting breast cancer, given previous protective measures taken. Remember that it now looks like ovarian cancer begins in the Fallopian tubes - and that I don't know whether mine were taken in 1991, or 2014... or maybe even never. You can imagine my confusion, then, with THIS: 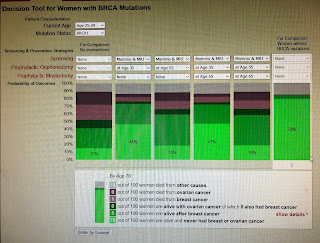 I requested records from the 1991 surgery and received this in the mail: 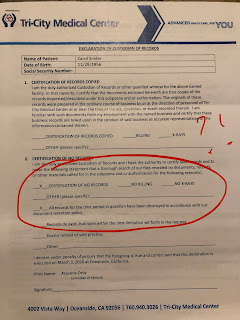 Damn! I tried to call this doctor and was shocked to get a return call from him. He remembered me because my twins were born on 11/9/89 as the Berlin Wall was coming down. It was unforgettable to me and my family, for sure, but apparently it was also unforgettable to him! We had a delightful conversation, but he insisted that he "would have never" removed my tubes if he didn't take my ovaries. Now what?!

I am also in contact with the surgeon's office who did the 2014 surgery. Her nurse assured me that the tubes are almost always taken with the uterus, so they wouldn't have taken them in 2014. Could this mean I still have them? That would most decidedly NOT be good!

So here we are - my new normal. It's a bit disconcerting, but I'm getting used to it.

What I am NOT getting used to is the subsequent news that Elisabeth has BOTH mutations, ATM and BRCA2.  She will be facing a lot of decisions as she moves forward, but knowledge is power and she is smart and in the very best care through the Breast and Ovarian Cancer Prevention Program at the Seattle Cancer Care Alliance. She wants more children and she has time to have them; she will just need to be proactive once she and Danny have completed their family.

Like my mother was there to take care of my kids when I needed her help, I will be there to help Elisabeth (and Kat, of course) when they need me! And I will be alive and healthy when I do it!

Tom has not received his results yet, but we are certain that he has the ATM gene mutation (which might have played a role in his prostate cancer). Hopefully there won't be any additional surprises! Peter and Alex have chosen not to be tested at this time.