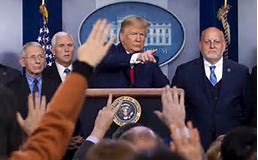 “The code of the con is to know just enough about everything so you can lie about anything." ~E. Tancarville~

I know I shouldn't be watching Donald trump's nightly liefest and propaganda filled news conferences to the nation, but it's like a car wreck on the highway, I find myself unable to turn away. Honestly, they don't need to bring SNL back, because the comic relief this guy gives us night after night is better than anything that they could ever write on one of those shows.

It's sad, too, because the purpose of these press conferences is to give the nation a daily update of what is going on with the deadly coronavirus. But sadly, night after night respected doctors and health professionals have to stand aside and listen to this egomaniacal buffoon tell one glaring lie after another.

The poor journalists whose job it is to ask questions, are finding out they they are the villains in his sick game. If they dare to ask a legitimate question, he lashes out and calls them fake news. If they attempt to fact-check him, he openly and brazenly lies, because he realizes that he will not be fact-checked in real time. In that room, it's just their word against his, and unfortunately for them, the bully pulpit always wins.

Last night was no exception. trump told lie after lie about his response to the virus, and added yet another scapegoat for his missteps: The World Health Organization. He even threatened to pull funding from the organization. Imagine that, pulling funding from an organization that is responsible for monitoring the state of the world's health when there is a global pandemic raging.

He kept touting a drug that has not been proven to cure the coronavirus, and like a true conman, he had an example of a woman who had miraculously been cured after taking his magic drug. The lady in question was African American, and he made sure to let us know that. ("She spoke so well. It was unbelievable!" You know, cause black folks are not expected to speak well. Shades of Joe Biden and his Obama articulate gaffe.) The drug in question is now in short supply for people who really need it, and this is a direct result of trump's actions. But hey, in the con game, only the present matters.

We did learn one thing from this press conference and the medical experts last night, and that is that blacks are being more effected by this virus than all other segments of the population. They said that they are still trying to figure out why, but there is no need for that. I will tell them why: It's because blacks are the ones cleaning in environmental services and working on the front lines in hospitals, as well as other essential service industries. It's because black folks can't afford to take off from work and "social distance". They have to decide if they want to take a chance and die from hunger or the virus.  It's because blacks continue to lag behind the rest of the population when it comes to having proper healthcare and access to proper nutritional foods. It's because regardless of what you might hear, when it comes to healthcare- like so many other aspects of American life- there is no true equality in this country.

trump, of course, had a lie for that as well. "We are going to take care of the African Americans".

Those words should terrify every African American in this country.