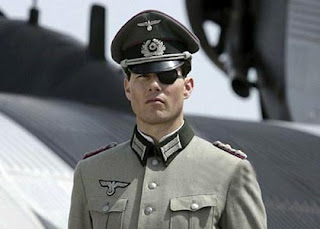 Valkyrie: from solemn drumbeats to big bangs
In case you thought that the film about the German plot to kill Hitler was sombre and talky, the trailer has made it out to be a Jean-Claude van Damme action special

In fact, just to labour both points, the first 30 seconds are made up of some of the most dramatic and sweeping statements you'll see in a cinema this year, spoken in sombre, weighty tones by sombre, weighty actors such as Kenneth Branagh, Bill Nighy and Terence Stamp.

"Gentlemen, we can save Europe from total destruction."

"We have to show the world that not all of us were like him."

Him meaning Hitler - not Tom Cruise who still hasn't appeared yet, despite being the one with his name in big letters above the title - and "us" being either "Germans" or "Nazis", it is not clear as yet.

It all sounds very important, very serious, and is only compounded by the big words on screen flashing between the sombre men.

"They" being the brave Nazi officers (which feels distinctly odd to type, but bear with me) and other members of the German resistance who plotted to kill Hitler. And ultimately failed, but that's not the point right now.

At 30 seconds in, the Cruise-ter is finally revealed to us, in all his dramatic glory. He's wearing a uniform - because everyone loves a Cruise in uniform, right? Surely evidenced by the fact that he's worn so many now, he's like a one-man Village People.

By one minute in, he's got a matching eyepatch. And, as he becomes quickly entangled in the plot to assassinate the Führer, he rocks that eyepatch as only an All-American Hero can. Yes, I know he's meant to be German. They're all meant to be German, but, sensibly, they're not all performing in cod German accents - that would be dreadful (although quite funny, an entire film with serious actors shouting, "VE HAFF VAYS AFF TRYING TO SEV EURIP FROM TOTAL DESTRUCTION!") - so they're all performing in their own accents. Which is all well and good, but it's just a sightly unfortunate coincidence, then, that everyone who has spoken up to this point has had a cut-glass English accent, and suddenly Cruise's Colonel Claus von Stauffenberg bowls up and is as German as mom's apple pie.

Anyhoo. Back to plotting to kill Hitler.

"Any problem on earth can be fixed with the careful application of high explosives" is a piece of advice I plan never to pass on to my gynaecologist, but it is apparently part of the complex assassination plan, as explained to Cruise by another American-accented German resistance figure.

And with that, things start blowing up. After an initial trailer, released last year, that made the film look a little too theatrical and talky for potential audiences, they remade the trailer to focus more on the actiony aspects of the plot and less on the quiet "plotting" bits that might scare people off.

And thus the rest of the trailer is made up of big bangs, firing squads and aeroplanes, causing some concern that one of the most interesting and difficult stories as yet untouched by mainstream Hollywood might just have been turned into a roister-doistering Jean-Claude van Damme special.

That, of course, can't be true, for if it was, where would Cruise be hoping to pull his Oscar from? And hope he surely must. So, there are scenes of heart-wrenching family partings, dire warnings and tense meetings with Hitler himself. You begin to develop a cold sweat and wonder how it all might end ... or you would if you weren't aware that the July 20th plot ended in confusion and failure, with Hitler being merely scratched and living almost another year, 200 members of the resistance executed, and the movement falling apart. Still, no reason to ruin a good story, eh?

And, perhaps to muddy the water just a little, cause a little ripple of confusion and make us feel like we might not know what's going on after all, mingled in amongst the bangs are little scenes that might or might not mean nothing at all. My very favourite moment is one minute 53 seconds in. In it a woman sitting in a typing pool raises her hand. Why? What reason lies behind this? We may never know. It's brilliant. Completely mysterious, utterly inscrutable, yet clearly one of the most important hand-raisings in history, and one of the best moments in the entire film, as it's been included here. I don't know who she is, I don't know what she's doing, I just know it is, by default, brilliant. Someone give that woman an Oscar.