That first day: I helped out as usual with the Thursday rehearsal for the elementary school production of “Seussical Jr.” that never would be, which we didn’t know at the time, because, as we stood there in the hallway waiting to pick up our children and take them home and apparently not bring them back the next day, as we’d been instructed by the principal, we said things to one another like, “This will be two weeks or so, right?” and one parent said, “It’s not going to be two weeks.” She was. like, very, extremely correct.

How to prepare mango leaves for diabe…
Slot Canyon Utah Guide: 15 Best Slot …
What to wear: outfit ideas for Christ…
Karen Wiesner: I Have Dreamed a Littl…
Unpacking the Historical Relationship…

And then: I Wrote, because that is all I know how to do, it turns out (and I DEFINITELY do not know how to be a teacher). I wrote about when my friend Jack and I approached each other at the neighborhood creek with our BFF daughters and had to yell at them not to go too close to one another. Kindergartners who hadn’t seen eachother in a whopping 24 hours. It was like telling pent-up puppies to calm down, don’t play. I wrote about how much I missed school. I - what the hell - journaled. I joined the PTA board, and I wrote about that too. .

One day: I sat down to disinfect each item I’d brought home from the grocery store, leaning against the wall in the mud room (really a mud hallway) that leads from our garage door to our kitchen. I cleaned a can of chicken broth, then looked at the rest. So much. So many children (fine, only three). So hungry all the time and home was the only restaurant open. I started crying after cleaning just that one can and decided that if disinfecting groceries was going to be my undoing, it wasn’t worth being undone. We’d eat our dirty groceries and have takeout from the box it came in like normal. This decision was eventually justified and I continue to feel pretty cocky about it.

Summer: in Maine was an escape. I know it wasn’t, but it felt untouched. I wrote about the dock, which was a symbol. Everything seemed like a symbol. We were and remain lucky, lucky, lucky.

The fall of 2020: was not better although I swore I’d heard some expert on the news back when this all began telling us it would be, so, in the winter of 2020: we sat around fire pits like it was our job, toes slowly freezing past the point of feeling while our hearts swelled from the sheer joy of scrappy companionship. We hiked and we hiked, following blue diamonds and red dots and white squares and what have you, sometimes even with snowshoes, and - against all possible odds - I am a moderately experienced hiker now.

Biden won: We spent the day the news broke in Brooklyn hopping actual street parties and smiling til it hurt.

It was spring and vaccines: and it was going to be over! It was early summer: and I went to see a show in a small music venue and my friend and I took our masks off inside and had two beers, life was magic. We ate at restaurants with plans for more, much more.

Then: Delta and that was a golden, distant memory, as soon as it began.

Pandemic summer number two: felt more and less free, perhaps because we were all getting resigned to the lack of answers (and, lack of freedom, come to think of it). Maine was yet again a salve, but less untouched. We camped in New Hampshire, and I realized, having not done it for many years, how much I like camping because there isn’t a house to worry about and, hold up, I actually do love the wilderness. I sat at a picnic table with wine in a tin cup my friend gave me the minute I stepped out of the car and my sigh was part real, part metaphorical and very, very long. We climbed a very high mountain, those months of hikes paying off, then sat among the low clouds at the top, eating peanut butter and jelly sandwiches, most of us rejoicing and some of us, like Nora, stating resolutely that they’d never do it again, but smiling (I caught her). 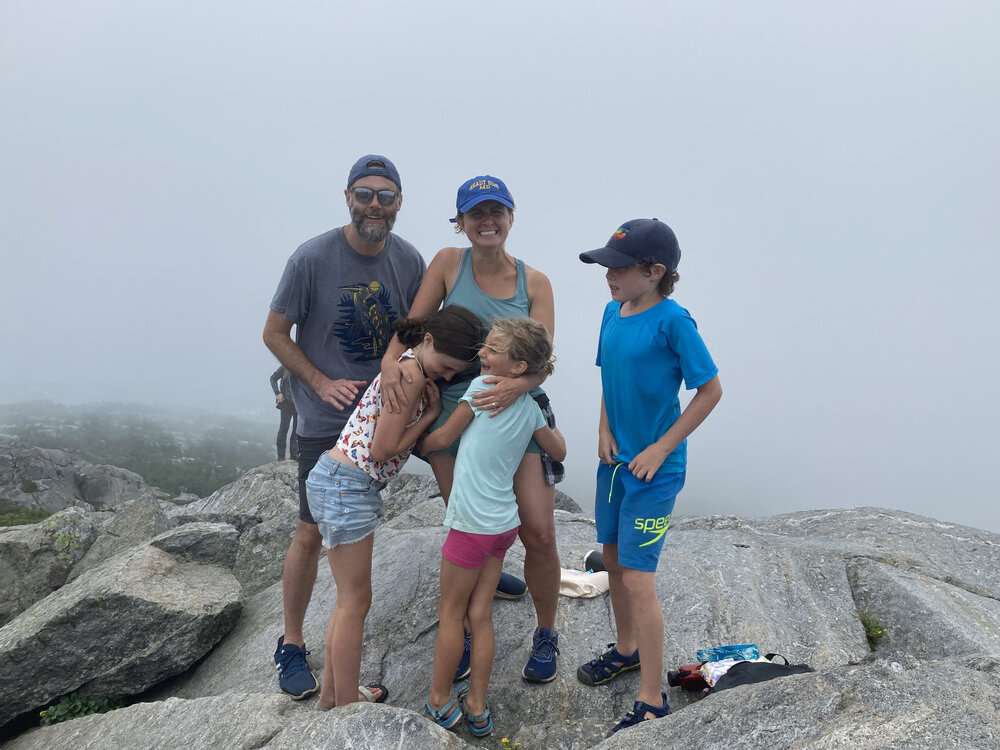 And then, another academic year: and that’s now, the pandemic not past, but “still,” not, perhaps, surmountable, but live-able.

This morning: I am Standing in out back with a landscaper, who we have hired to clean up our yard. The garden, so carefully curated by the previous owners, has become choked out by invasive species and we aren’t sure what’s what. Sitting on our patio, which should be an ultimate pleasure, has become a stressful enterprise as we stare at the towering, reedy white flowers that are surely weeds, easily plucked from the earth with a satisfying tug, but there are so many now. “They’re pretty!” says Aidy! And I reply that they are, but that they’re keeping the proper residents at bay…blackberry and butterfly bushes and plants we don’t yet know too well yet, don’t know the right names, but will learn, eager horticulturists that we are - and we really are!

It strikes me, standing here, chatting about the possibilities with this kind, knowledgable soul, how fortunate we are to have this option. I call to mind the narrator of the Talking Heads song, “Once In a Lifetime,” when he suggests that you might ask yourself, “Well, how did I get here?” This house. This life. Wild world, a modicum of control. It strikes me as I am standing here not three feet away from this person, who I met only recently, that we’ve all learned so very much so quickly, and that the proximity and discussion - about simple actions like redefining the flower bed - are so delightful because it was normal to miss these everyday delights. And right to celebrate them. How did I get here? Sometimes I haven’t known the answer, but this history-in-real-time we’ve all been living means that, today, at least, I truly do.