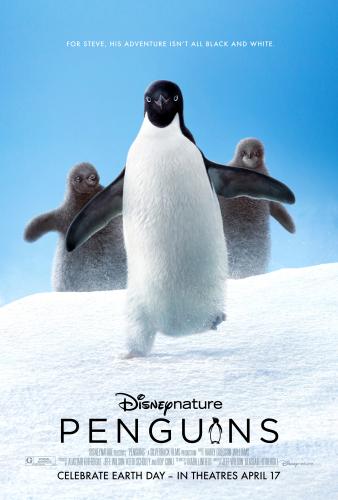 Every year, as Earth Day approaches,  I always look forward to seeing a new Disneynature Film.  This year, my family and I were invited to see Penguins at Disney Studios.

Some years ago, I received a DVD about penguins. Going in to see this film, I believed I had some knowledge of penguins.  Although I had some familiarity, I knew it did not matter what DVD I had watched, Disneynature was going to make their film more engaging and entertaining, all the while offering cool facts about penguins.

Just as I anticipated Disneynature did not disappoint me.  Dinsey animal films are always the best!

Penguins is an upcoming American nature documentary film directed by Alastair Fothergill and Jeff Wilson. The coming-of-age story follows an Adélie penguin named Steve who joins millions of fellow males in the icy Antarctic spring on a quest to build a suitable nest, find a life partner and start a family.

Narrated by Ed Helms (“The Office,” “The Hangover” trilogy,”The Daily Show with John Stewart”), Disneynature’s
all-new feature film “Penguins” is a coming-of-age story about an Adélie penguin named Steve who joins millions of
fellow males in the icy Antarctic spring on a quest to build a suitable nest, find a life partner and start a family. None
of it comes easily for him, especially considering he’s targeted by everything from killer whales to leopard seals,
who unapologetically threaten his happily ever after. From the filmmaking team behind “Bears” and “Chimpanzee,”
Disneynature’s “Penguins” opens in theaters and in IMAX® April 17, 2019.

Helms did such an amazing job as the narrator.  My family, and I believe the rest of the audience instantly fell in love with Steve.  As we laughed during different scenes, my six-year-old niece turned to me and asked, “Can the other penguins talk like Steve?”  Aside from missing when my children where that age, I realized not only did she believe Steve was really talking, I think we all did.  We were all drawn into Steve’s life.

Steve is a 5-year-old Adélie penguin who’s ready to tackle the next phase of life: building a family. “He’s becoming a father for the first time me,” says producer Roy Conli. “He returns to the place where he was a chick to build a home and find a mate.”

Tackling this new phase of his life did not come easy for Steve.  He seemed to have trouble doing everything.   He struggled with keeping up with the penguins, finding a mate, finding food, gathering pebbles, feeding his chicks.  Although these are areas Steve struggles in he conquers them.  I believe things will getter from him as he matures.  It would be interesting to see the progress he makes.  My niece is convinced there is going to to be a Penguins 2.

As Steve tackled this new phase of his life, we learned so many fun facts about Adelie penguins.

What Are Interesting Facts About Penguins:

The only thing I questioned was, Where do the young penguins go until they become adults?  Where was Steve for five years?  I guess I will have to do my research.  Did I miss something?

My family has seen most of the Disneynature theatrical releases and have loved them all.  They open our eyes to how animals live and survive. They also leave you with some buring questions.

Going to see these movies are perfect Earth Day activities for kids and adults.

“Want to showcase your product to my audience? Then check my advertising options.” Click here.