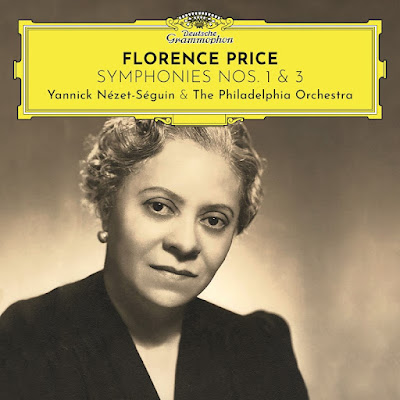 Conductor Yannick Nézet-Séguin and The Philadelphia Orchestra’s critically acclaimed Deutsche Grammophon recording of Florence Price: Symphonies Nos. 1 & 3 has been nominated for Best Orchestral Performance for the 2022 Grammy Awards. The Grammy, which celebrates both artistic and technical achievement, is the recording industry’s most prestigious award.

“We’re honoured that the Recording Academy continues to recognise our work,” said Dr Clemens Trautmann, President Deutsche Grammophon. “Over the past year our artists have released some extraordinary recordings, from monuments of the repertoire such as Mahler’s ‘Symphony of a Thousand’ to the recently rediscovered symphonies of Florence Price. They have connected with new audiences around the world and demonstrated the life-enhancing spirit of classical music in all its forms. I’m delighted that their achievements are reflected in the nominations for the 2022 GRAMMY Awards.”

Florence Price came to prominence almost ninety years ago, having surmounted systemic barriers to the progress of African-Americans and women in classical music. Much of her music then fell into neglect, however, and has only recently been rediscovered. Among those championing her work today are The Philadelphia Orchestra and its Music Director, Yannick Nézet-Séguin.

“We’re delighted to record the music of Florence Price”

“We’re delighted to record the music of Florence Price for Deutsche Grammophon,” said Yannick Nézet-Séguin. “So much important music around the world has been neglected, not because of the quality of the work, but for superficial reasons. It’s so important to me and to The Philadelphia Orchestra to look at these works, bring back the music of composers we believe in, like Florence Price, and continue broadening the repertoire to give a much more diverse representation of who we are as a society today.”

Florence Price’s Symphony No. 1 in E minor (1931–32), winner of the Rodman Wanamaker Contest in Musical Composition, was first performed in 1933 by Frederick Stock and the Chicago Symphony Orchestra and was the first symphonic work by an African-American woman to be performed by a major American orchestra. Her Third Symphony, originally commissioned by the Federal Music Project during the Great Depression, was first performed in 1940.