Interview: Magna Carda - At the Crossroads of Serendipity and Magic 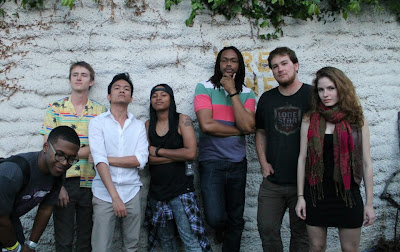 Magna Carda, the Austin Hip-Hop band, has come upon the scene seemingly out of nowhere with their first single “Inviting You”. And if you thought the band’s name was a genius-ly crafted marketing stunt to coincide with Jay-Z’s recently released Magna Carta, you aren’t the only one. And that’s not the only magically serendipitous moments in the formation of the band, Magna Carda, composed of Megz Kelli (Rapper), Dougie Do (Producer), Eric Nikolaides (Guitar), Quentin Walker (Bass) and Joe Layton (Drums).

Let’s rewind several years back to the St. Edwards’ campus when a chance introduction between two artists, Megz Kelli and Dougie Do met. The flippant meeting was quickly brushed off as just another person met in the travels of life. At the time, both were still experimenting and discovering their own artistic styles. But as fate would have it, Megz and Dougie Do would meet again and realize that their unique styles could be molded into something unique unto itself. Early on, there was always a desire to form a band. However, for Megz and Dougie Do, the attempts at forming their own band would prove to be difficult.
But those frustrations would lead to two duo projects, Creature Creative and The Shoe String Theory. We see in Creature Creative the early experimentation by Dougie Do with sampling. And we witness in Megz, the voice of a young woman discovering a canvas to paint on with her pent-up emotions. From Creature Creative, here is Red Bottom Chronicles.
Creature Creative by Megz Kelli & Dougie Do
A year will go by before the duo will drop their next project. The Shoe String Theory would be a coming out party of sorts for the duo. Megz’s sound would grow to be inspired by neo-soul and her father’s gospel background. The poetry she brings in Shoe String Theory flows with a womanly strength. The ying to the yang, Dougie Do discovers the confidence of a man who’s lived around the world and influenced by sounds from bossa nova to electronic. You also see the influence of Jazz, which came from Dougie Do’s grandfather who was also a DJ in the Airforce. One of my favorite, here is Feel Good from Shoe String Theory.
The Shoe String Theory by Megz Kelli & Dougie Do
The current chapter would be the formation of Magna Carda. After witnessing one of the legends, Mos Def at Emo’s with a full band, the gears and inspiration would be set in motion. I was also at the concert and remember that night well. Not only did you witness one of the greats, Austin was treated to greats of our own, LNS Crew, Riders Against the Storm, Crew 54 and Bavu Blakes. It was indeed magical.
They say serendipity is being at the right place at the right time. And the formation of Magna Carda is quite a serendipitous story. What else would you call finding your bass player disguised as the A/C maintenance guy by the name of Quentin Walker? How about finding your drummer, Joe Layton, while performing due to a last minute cancellation at the KVRX live show? Who just happens to be the son of Stevie Ray Vaughn’s drummer, Chris Layton. And then the cherry on top, you throw into the mix, Eric Nikolaides from America’s Got Talent from another one of Austin’s dynamic duo, Eric and Olivia.

At the crossroads of serendipity and magic, Magna Carda is "Inviting You".

Interview: Magna Carda - At the Crossroads of Serendipity and Magic