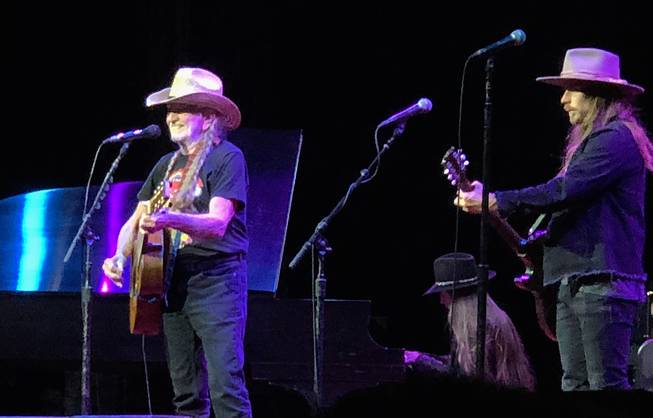 Willie Nelson’s rescheduled concert dates (from January) at the Cosmopolitan’s blank-canvas venue the Chelsea were quite a bit different from his February 2017 shows at the Venetian. The now 85-year-old legend had to cancel a few shows last year due to illness as well but bounced back to thrill an appreciative audience. Inside the Chelsea Friday night, he strummed his ancient guitar Trigger and rolled through classic Texas tunes as expected but provided ample time for his son to shine throughout the night.

8 Places to Drink Coffee in KC that …
Leicester City vs Chelsea 2-2 Highlig…
Kraken OTC’s 8 out of 10 trades are i…
Afraid or not, life still marches for…
VOTE 2020 - Middle America

During an opening set of his own tunes — including several from last year’s “Lukas Nelson & Promise of the Real” studio album — the 29-year-old Lukas Nelson did more than wake up a Vegas crowd anxious to see and hear his famous father. He effortlessly won the audience over, especially with the bluesy ballad “Find Yourself” and its invigorating chorus, “I know the love that I deserve.”

Lukas’ presence wasn’t the only change from last year’s Venetian shows. Willie also deftly covered Frank Sinatra’s “Fly Me to the Moon” without making it sound like an obligatory Vegas offering, injecting that unique tenderness that sets his iconic voice apart. There was more emotion, of course, for “Georgia on My Mind,” and then after a fun trip through “Still Not Dead,” he was done. A little more than an hour of music would have to be enough on this night and no one was complaining.