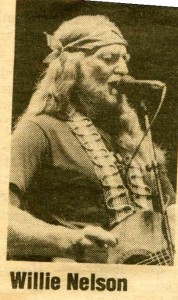 After the debut show at the Austin Opera House plans are for the channel to air daily from 6 p.m. to Midnight, Nelson said.  The channel will be called the Outlaw Music Channel.

Programming will include a weekly songwriter’s showcase hosted by Nelson, a music video program, vintage performances by Porter Wagoner and other country music pioneers and musical clips from old movies.   Nelson also said some programming will originate from Antones, an Austin blues club.

“We’re just going to fire at it and see what happens.  This way we can do it, and do it quickly, and if viewers like us, they can leave us on,” Nelson said.

Nelson pulled his name and support from the Cowboy Channel in November after a dispute with one of the principle investors.  The channel, based in Austin, was to have been marketed to cable systems throughout the country.

Film maker Doug Holloway, former president of the Cowboy Channel, is helping to launch the Outlaw Music Channel.  The name of the new music channel comes from the “outlaw” country music genre inspired by Nelson, singer Waylon Jennings and a loose knit group of other musicians.

Nelson said the Outlaw Music Channel will be beamed to North and South America by the Westar 4 satellite, transponder 17, which can only be received by households and businesses with satellite dish antennas.

In addition to the Opera House in Austin, some segments of the show will originate from the Music Village USA in Hendersonville, Tenn.  David Allan Coe will host these slots.

Tickets for the Opera House portion of the show are reasonably priced, and are available at all Star Ticket Outlets.