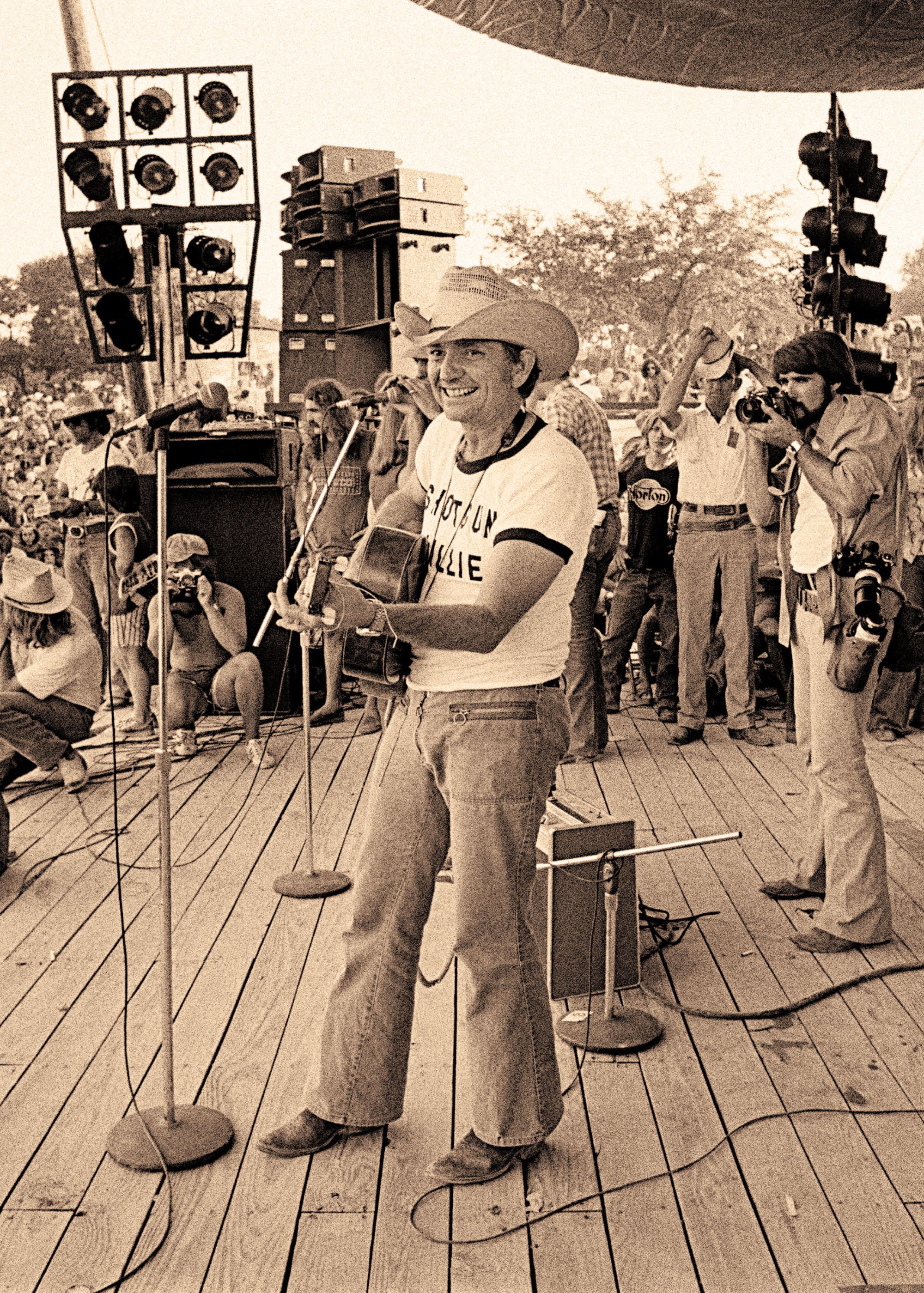 In 1972 the Austin Music scene exploded with a new, rootsy form of country that turned its back on Nashville and embraced the counterculture. Forty years later, Willie Nelson, Jerry Jeff Walker, Michael Martin Murphey, and a host of other cosmic cowboys and redneck rockers remember the first Dripping Springs Reunion, the time Waylon Jennings almost got busted, and the birth of outlaw country.

What it was was a generational shift, and not one that Music Row wanted. In the late sixties, Nashville country music was defined by the string-swelling, countrypolitan gloss of Tammy Wynette and Glen Campbell. RCA executive Chet Atkins was a chief architect of the Nashville sound, and when people asked him to define it, he liked to jingle? the change in his pockets and say, “It’s the sound of money.” No tweaks to the formula were tolerated. Even Willie Nelson and Waylon? Jennings, two Texas boys with ideas of their own, were forced to fit the mold. They recorded for RCA, and their records sounded exactly the way Atkins wanted.

The rest of the nation had less success maintaining the old order. In cities like San Francisco, the counterculture was popular culture. Hair was long, love was free, and dope smoking was considered tame. The music ranged from the psychedelic extremes of Jefferson Airplane to the rootsier jangle of Creedence Clearwater Revival, with acts like Janis Joplin and the Grateful Dead straddling the two. Nashville, with its pompadours, whiskey, and quiet reliance on truck-driver amphetamines, had no use for any of it. When Los Angeles bands like the Flying Burrito Brothers started playing country rock, winking at Nashville in Nudie suits festooned with rhinestone pot leaves, Music Row responded with disgust.

Halfway between the coasts sat Texas, where hundreds of honky-tonks functioned as Nashville’s farm system. But that music belonged to the old guard. Texas kids were more interested in the state’s thriving folkie circuit. The hub was a Dallas listening room called the Rubaiyat, from which young singer-songwriters like Steve Fromholz and B.?W. Stevenson sallied forth to coffeehouses around the state. The music they played was distinct from the protest songs of Greenwich Village. Texas folk was rooted in cowboy, Tejano, and Cajun songs, in Czech dance halls and East Texas blues joints. It was dance music. And when the Texas folkies started gigging with their rock-minded peers, they found a truer sound than the L.A. country rockers. There was nothing ironic about the fiddle on Fromholz’s epic “Texas Trilogy.”

It’s impossible to pinpoint the exact moment when that sound and scene coalesced into something cohesive enough to merit a name, but then again none of the labels people came up with—cosmic cowboy, progressive country, redneck rock, and, ultimately, outlaw country—made everyone happy. Still, the pivotal year was 1972, and the place was Austin. Liquor by the drink had finally become legal in Texas, which prompted the folkies to migrate from coffeehouses to bars, turning their music into something you drank to. Songwriters moved to town, like Michael Murphey, a good-looking Dallas kid who’d written for performers such as the Monkees and Kenny Rogers in L.A. He was soon joined by Jerry Jeff Walker, a folkie from New York who’d had a radio hit when the Nitty Gritty Dirt Band covered his song “Mr. Bojangles.” In March, Willie played a three-day country festival outside town, the Dripping Springs Reunion, that would grow into his Fourth of July Picnics. Then he too moved to Austin and started building an audience that didn’t look like or care about any Nashville ideal. By the time the scene started to wind down, in 1976, Willie and Austin were known worldwide.

To say that Nashville eventually got hip to what was happening would be too kind. Rather, the industry identified a chance to make money and came up with the “outlaw” label, which now applies to one more subset of the Nashville establishment. While it rightly conjures images of Willie, Waylon, and the boys, other stars who made careers off it, like Hank Williams Jr., couldn’t have had less in common with hippie poets like Murphey and Fromholz. But something more than marketing persists in the label. It was coined to describe country songwriters who wouldn’t conform to traditional strictures, who insisted on making music that sounded right to them. What follows are their stories of how they pulled that off.

As the seventies began, there were two major schisms bearing down on Austin’s budding country music scene. The first was political. The cultural upheaval of the sixties was still going full force, particularly in Texas, even in a city that considered itself as forward thinking as Austin did. The second related more narrowly to the music. The only route to success for young Texas country songwriters went through Nashville, a stubbornly conservative industry town considered every bit as reactionary as the Nixon administration. Even Kris Kristofferson, a Brownsville-born Rhodes Scholar who followed the traditional path—he worked as a janitor at a Nashville recording studio before he started collecting number ones in 1970—failed to fit in. His writing was considered too esoteric. More to the point, his hair was too long.